The Eliza II was built in India in 1806. This was her first voyage bringing convict to New South Wales. She was the next convict ship to leave Ireland bound for New South Wales after the departure of the Cambridge in June 1827. [3]

Crimes of the Prisoners of the Eliza

While most of the prisoners of the Eliza II were convicted of crimes of petty theft and burglary, the indents reveal that there were also men transported for White Boy crimes such as administering unlawful oaths. Three brothers Denis, John and Thomas Dempsey were transported under Lord Ellenborough's Act.

The Eliza II departed London on 20th June 1827 bound for Cork where she embarked her prisoners and departed on 19 July 1827.

The Eliza II came direct without calling at any ports.

George Shaw Rutherford kept a Medical Journal from 15 May 1827 to 26th November 1827. He was well experienced this being his fourth voyage as surgeon superintendent on a convict ship and it was remarked on his arrival in the colony that he looked much better than ever. All of the prisoners survived the journey.

Unusually, the Master of the vessel Lieutenant Leary R.N., spent three weeks on the sick list. He fell ill with rheumatism on 30th August suffering pain in his thigh and knee and wasn't discharged until the third week in September.

Around 25-26 September there was a major outbreak of diarrhoea amongst the convicts. All the convicts survived however soldier George Moron died in October after suffering 'dysentery'.[2]

A soldier's wife gave birth on the voyage.

George Shaw Rutherford was born in Ireland in 1789 so approximately 38 years of age on this voyage. He was the brother of James Rutherford also a surgeon superintendent. Select here to read James Rutherford's correspondence written in 1837 regarding his brother George and the accusations of James Mudie.

In 1831 George Rutherford gave evidence before a Select Committee which was appointed to inquire into the best mode of giving efficiency to Secondary Punishments and to report their Observations to the House. Select here to read the evidence he gave

The Guard comprised a detachment of the 30th regiment under orders of twenty-five year old Lieutenant William James Yonge of 46th regiment who was accompanied by his new wife Anna Maria. W.J. Yonge was appointed Ensign in the 46th on 27 July 1826 and Lieutenant 17 May 1827.( Hart's Annual Army List, Militia List, and Imperial Yeomanry List). More information about William James Yonge from Yonge of Caynton House and the U.S.A......... William James Yonge was born at Caynton in Shropshire on 16th October 1802. He served in the Army, rising to the rank of Lieutenant-Colonel of the 1st Battalion 60th Rifles. He married 1stly at St. George's Hanover Square on 1st March 1827 Anna Maria daughter of Lambert Maloney. He married 2ndly, at Bombay in India on 1st November 1847 Martha Ann Deacon. He died on 28th August 1877 at Jullundur in India and was buried there. His widow died on 27th December 1887.

Passengers included George MacLeay Esq., the third and youngest son of the Colonial Secretary Alexander MacLeay who was about eighteen years of age and had recently finished his education at Westminster School. 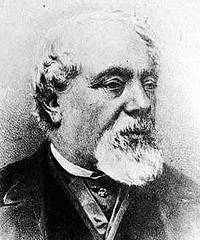 George MacLeay died at Mentone, France, on 24 June 1891. The Sydney Morning Herald included a brief obituary in their publication dated 29 June 1891...The death is announced, at Mentone, of Sir George Macleay, K.C.M.G., eldest son of the late Hon. Alexr. Macleay, F.R.S., formerly Colonial Secretary and Speaker of the Legislative Council of New South Wales. The late Sir George Macleay, who was in his 82nd year at the time of his death, was for many years a member of the Legislative Council of New South Wales, and for his public services to this colony, as well as in assisting in Australian exploration, he was created a C.M.G. in 1869, and wass advanced to K.C.M.G. in 1875. He came out to the colony at an early age and in 1830 accompanied Captain Stuart on his expediton down the Rivers Murrumbidgee and Murray.

More about Sir George McLeay at the Australian Dictionary of Biography

The Eliza (II) entered Bass's Straits on 4th November 1827 and took a total of 5 weeks and 4 days from the Cape to Port Jackson. They arrived on 8th November 1827, a voyage of 112 days. Convict Henry Huston was discharged to the hospital on arrival suffering a serious case of scurvy.

A Muster was held on board by Alexander MacLeay on 10th November 1827. The Convict Indents include the Name, Age, Education, Religion, Marital Status, Family, Occupation, Offence, Sentence and Physical Description. There are also some details of deaths and pardons.

There are no details in the indents as to where the convicts of the Eliza were assigned. Some were later assigned to the Australian Agricultural Company at Port Stephens. Others were assigned to settlers such as William Ogilvie, Robert Coram Dillon, John Wighton, James Bowman and William Dangar


3. The Eliza II returned to New South Wales with convicts in 1829


4. Lieutenant Daniel Leary was formerly Captain of the Woodman. He died at Crowlink, Sussex on 24th August 1839


5. Michael Connolly/ Brophy was 21 years old when he arrived on the Eliza II in 1827 under an sentence of transportation for life. He received a ticket of leave in 1864..... 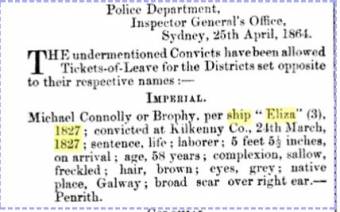 
7. Bryan Boveen/Roveen was one of the men on the Eliza II. In January 1835 his wife and child were recommended for a free passage to New South Wales and embarked on the convict ship Neva.. They perished when the Neva was wrecked the following May.(1)


8. NationalArchives - Reference: ADM 101/23/4 Description: Medical journal and diary of the Eliza convict ship from 15 May to 26 November 1827 by G S Rutherford, surgeon and superintendent, during which time the said ship was employed on passage to New South Wales.