Use the Search Box above to find your Hunter Valley Ancestor.
William Ogilvie was born in 1782 at Holborn Hill, England. He arrived as a free settler in 1825 on the convict ship Grenada with his wife and four children. Soon after arrival, and accompanied by ship surgeon Peter Cunningham, William Ogilvie sailed up the coast to Newcastle before travelling further up the valley to select land. After making his selection, he brought his family to Newcastle while he returned to Merton to establish a dwelling for them.

Peter Cunningham described William Ogilvie's Merton estate in his publication'Two Years in New South Wales; a Series of Letters, Comprising Sketches of the Actual State of Society in that Colony; of its Peculiar Advantages to Emigrants' : -

'Mr. Ogilvie possesses here six thousand acres, consisting of alluvial flats and lightly timbered forest land backwards, bounded by a moderately high ridge. A plain of fifty acres of rich land (without a tree upon it) is situated in the middle of the grant, overlooked by a beautiful swelling hill, equally clear, of the finest sort of garden mould, and covered with luxuriant grasses. The Goulburn River enters Hunter's River opposite to the bottom of Mr. Ogilvie's grant, the plains on each side being hemmed in by woody ridges of moderate elevation, toward which the back land gradually rises. Contrary to what is generally found in other parts of the country, the ridges upon the upper part of Hunter's River are almost uniformly flattened at the top, forming little miniature hills and valleys covered with fine soil of moderate depth, and bounding in grass, which makes them the great resort of the kangaroos and cattle in the winter season.'

The House at Merton

In Dawn in the Valley, W. Allan Wood recorded a description of the first house at Merton written by Ellen Ogilvie (Bundock), daughter of William Ogilvie:

The house which our father had prepared for us at Merton was a small four roomed cottage, whitewashed nicely, as pipe clay was found close by - white and buff. Our mother was greatly pleased and very happy at Joining our father in this little house, which was charming. Small as our home was, there was room to receive constant visitors. Our mother had the knack of making all around her charmingly pretty and picturesque, as well as fresh and clean. At first, we had only earthen floors made by Irishmen, who broke up the earth until it was powdered and then, when whitewashed, it made good firm flooring but was very troublesome to keep clean. Subsequently the floors were laid down in wood and by degrees the house was added to.

In Squatter's Castle, George Farwell describes the relationship between the Ogilvies and the Aboriginal tribe of the district -

The area was heavily peopled with Aborigines at that time and the Ogilvies treated them well and encouraged their children to do the same, a habit Edward (Ogilvie) throughout his life. It was here that he learnt the natives' language, a fact that was to save his life on at least two occasions.

Peter Cunningham, in the volume mentioned above, described an incident in 1826 in which the intrepid Mary Ogilvie confronted the natives 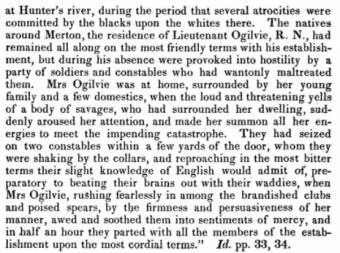 There were many convicts assigned to the Merton estate over the years. Select here to find the names of some of them.

William Ogilvie died 10 March 1859 at Wooloomooloo and the Merton estate passed into the hands of the White family.

1). Find out more about Merton Homestead at NSW Heritage

3). A visitor to Merton in 1895 described the cellars. They were almost unchanged from the days of William Ogilvie -

A portion of the original convict-built buildings still remain, though the bulk of them of recent years, has been demolished. It is wonderful, looking at the solid cellars built in those days, now over 60 years ago, to note how true and faithful they are in construction, so good in fact that they are almost as perfect as the day they were finished, putting all the modern work quite in the shade. The Mcrton cellars, for example, into which Mr. White took me, show nothing more in tiie way of decay, after sixty years, than one crack in the wall. These cellars were used in Capt. Ogilvy's time for the purpose of storing wine, an extensive vineyard in those days being a feature of the place - Strolling round with Mr. Reginald White many things at Merton arrest one's attention, recalling the days when Captain Ogilvy was in occupation. Among the old land-marks is a sundial which was the only recorder of time to ring the consigned servants up and send them to meals, and bed again, whilst alone the dial hangs the Old Bell that is used even to the present day for the same purpose....- Maitland Weekly Mercury 2 November 1895