The John departed London on 22nd July 1827 being the next convict ship to leave England for New South Wales after the departure of the Champion in June 1827.

The Guard comprised a detachment of the 40th regiment under the orders of Lieut. Stopford, of the same corps. The 40th regiment spent almost the whole of its first period of service, between 1824 and 1829 in Tasmania, embarking for service in India in 1829. 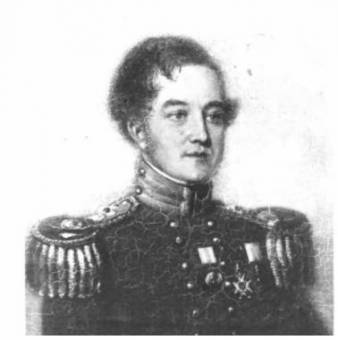 He died at the storming of Bushire in 1856. His obituary mentions his cool bravery on the voyage to Australia when convicts apparently mutinied, although there is no mention of convicts killed in a mutiny on this voyage in other records -

IN THE PERSIAN EXPEDITION. DECEMBER, 1856. Killed at the storming of Bushire, Brigadier Stopford, C.B. This gallant officer was the third son of the Rev. William Stopford (Rector of Garrycloyne and Grenah, grand-nephew of the 2nd Earl of Courtown). He studied military art at the University of Gottingen ; whence he received a commission in the 40th Regiment. He was sent to join this corps, then serving in Australia, in charge of a convict ship, and on the voyage he showed his first instance of cool bravery.

He was parading his guard on the quarter-deck, when the convicts rushed on deck, having mutinied, and taken advantage of an endeavour to save the doctor, who had thrown himself overboard ; Ensign Stopford had barely time to form his men and fire on the mutineers, and they were forced below, with many killed and wounded. From Australia he accompanied his regiment to India, and served with it there until it came home under his own command as Lieutenant-Colonel.

He accompanied the 40th as junior Major up the Bolan Pass, in the Candahar campaign ; was at the taking of Khelat-i. Ghilzie and Cabul, and, having traversed India, returned through the Khyber Pass to Bengal. He commanded the 40th at Maharajpore, where, in attacking and taking the enemy's guns, the 40th lost as many officers and men comparatively as they did at Waterloo. Here, as the despatch said, -'Major Stopford fell, leading on his regiment, dangerously wounded, at the very muzzle of the enemy's guns'

For this service he was made Lieutenant-Colonel, and C. B. He lay for a considerable time wounded on the field, among the dying and the dead, men and horses, and might have fallen a victim to his own generosity. When his 'dooly' or stretcher was sent for him from the rear, and he perceived General Churchill lying near him mortally wounded, with both legs carried away by a cannon-ball, he said, 'Oh General, you are worse than I am, you'll bleed to death, you must go on this dooly' When Colonel Stopford was at last carried to the rear, he arrived just in time to say farewell to the General, who died immediately after. In the expedition to the Persian Gulf, Colonel Stopford had the command of a brigade which was employed in the assault on Bushire. Colonel Stopford led his men in gallant style, forcing wall after wall, until the enemy were driven to the very cliffs on the margin of the sea; but, unhappily, fell in the moment of success. [1]

The Surgeon James McKerrow drowned having thrown himself overboard during in a supposed 'fit of lunacy', on the 16th October and no surgeon's journal survives for this voyage.

James McKerrow was employed as surgeon on the convict ship Earl St. Vincent to Van Diemen's Land the previous year. On the voyage of the Earl St. Vincent his journal indicates that he was a kindly surgeon. There were no deaths on the Earl St. Vincent and McKerrow was proud to state that the change for the better in their appearance after the voyage was over was truly astonishing as instead of the squalid objects of dissipation when embarked they were landed in such a renovated condition as to be capable of undergoing any common exertion or labour. He had had no occasion to have flogged any of the convicts, punishments required being only slight.

James McKerrow's Will names his father John McKerrow of Scotland as Beneficiary.

On arrival of the John, one seaman had died of typhus fever during the voyage, two more were severely ill on landing and four were in a sickly state.

Passengers included Rev. E. Smith, wife and family and John William Gosling Esq., who was about twenty-nine years of age.

Alexander McLeay held a Muster of 178 convicts on board on 28 November 1827, three days after the vessel arrived in Port Jackson. Seven men had been admitted to hospital, and three had died on the journey out.


Convicts of the John identified in the Hunter Valley

1. Convict Edward Bowen was one of several prisoners of the John assigned to the Australian Agricultural Company on arrival. He later became one of the Hunter River Banditti bushranger gang and was executed for his crimes in 1831.

2. John Sawyer was assigned to Dr. Rutherford on arrival. He was washing wool at Castle Forbes for John Larnach and witnessed the convict uprising that took place in 1833

3. Ralph Entwistle arrived as a convict on the John. He met his end on the gallows in 1830 having become the leader of a gang of bushrangers known as the Ribbon Boys. Read A Ticket of Leave for the Gallows by Robert Willson

[1] The Annual Register: Or a View of the History, Politics