THE MARINER WAS THE NEXT CONVICT SHIP to leave Ireland after the departure of the Brothers in October 1826. [2]

Patrick McTernan was appointed Surgeon-Superintendent to the Mariner in November 1826. This was his first appointment to a convict ship.

He kept a Medical Journal from 3rd November 1826 to 5 June 1827 in which he recorded a daily weather report for the entire voyage. He also included a Hospital Diet Table including a Full Diet, Half Diet, Low Diet and Fever diet. There was not even one case of scurvy. Apart from the cases in his sick list another hundred were treated with medicine from the hospital....indeed such was the mania amongst the prisoners for taking medicine that very often mornings passed over with ten or a dozen applicants besides those who were on the list, some requiring purgatives others emetics and but almost all sincerely complaining of 'the load at the heart' which was always relieved by an emetic or two. [1]

The Guard comprised a detachment of the 39th Regiment of Infantry under command of Captain Charles Sturt. They embarked on the 21st November 1826 at Chatham. Some of the soldiers of the Guard mentioned in the Surgeon's journal included Private John Iverson, Private Patrick Trainor and Sergeant Smith.

The Mariner departed Cork on 14 January 1827 and sailed via the Cape of Good Hope where about a dozen prisoners who had been convicted of crimes at the Cape were embarked.


Departure from the Cape 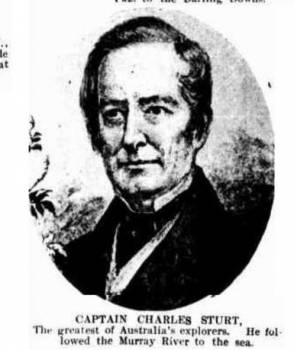 Captain of the Guard, Charles Sturt became one of Australia's most famous explorers. He was the first to chart the Murray River. Following is an extract from Charles Sturt - His Life and Journeys of Exploration. By J. H. L. Cumpston - Project Gutenberg describing Charles Sturt's early life and his voyage on the Mariner -

About the middle of May 1827 the ship Mariner was forging eastward with long lunges driven by a strong cold wind under a wet dead sky: no one on board without previous knowledge would have guessed that the bright land of their new life was then to the north of them. Standing by the port rail of the quarterdeck was one man who knew it; and whose memories and forebodings were stirred by the knowledge. For him the warm sunlight of Cape Town was fading to a pleasant dream, the sullen rollers a depressing illusion of immobility and desolation, and the solitary albatross a symbol of life spent in ceaseless movement with an uncertain goal and an unknown destiny. These things affected his thoughts and produced a mental depression which was to recur more than once in later life. He was a professional soldier--a captain of the 39th Regiment of Foot--and as he looked back to the west he reviewed the past and all that he was leaving.......

He, a soldier without influence, for whom promotion had already been very slow, was posted on service in a lonely outpost at a time when there seemed no possibility of war, with its chances of quick promotion, and no prospect of promotion otherwise. He was in his thirty-third year, with no hope of marriage on his pay. And he had already in his mind prejudged and condemned this new country which, as yet, he still could not see--he condemned it because of the uninteresting nature of the military service there; and because of the character of the population--the majority being convicts. He admitted later that these prejudices were formed in complete ignorance of the real conditions, but his depression as he shivered in his great coat was real enough. The master of the ship, sensing this, came over from the other side of the deck and told him that within the next few days they would have turned the corner and would be moving northward into, if the glass did not lie, calmer seas and warmer weather.

And so it was; within a few days the ship was moving northwards under full sail driven by a southerly breeze, yielding easily to the gentle Pacific swell, and the young army officer, well forward on the forecastle deck, enjoying the warm sun, was examining all that he could see of this new country. Behind the flat, heavily-timbered coast were the ranges, sometimes coming down to the sea, sometimes very distant, but always dominating the landscape. No one on board could tell him what was behind the ranges, but he wondered with that wonder which was to be the consuming passion of his life. For two or three days the weather remained bright and fresh, but, on the morning of 23rd May 1827 the wind changed to a light north-easterly breeze, and on a crisp bright autumn morning the ship turned in between South Head with its Macquarie Tower and the bold, flat face of North Head. The ship moved gently up the Harbour, taking in sail after sail until she came to anchor in Sydney Cove, and Charles Sturt came to the country which was to be his home for twenty-six years, and his major interest for life. With him came his faithful soldier-servant Joseph Harris, who 'would never leave him'.

Sturt wrote of his own feeling on this occasion: 'With mingled feelings I gazed for the first time on the bold cliffs at the entrance to Port Jackson, nor did I anticipate anything equal to the scene as we sailed up that noble and extensive basin. The fact was, I had not conceived, from anything I had read or heard that, in that remote region, so extensive a town could have been reared in so brief a period. It is the very triumph of human skill and industry over Nature.

'In a climate so soft that man scarcely requires a dwelling, and so enchanting that few have left it but with regret, the spirits must needs be acted upon, and the heart feel lighter. Such, indeed, I have myself found to be the case; nor have I ever been happier than when roving through the woods or wandering along one of the silent and beautiful bays for which the harbour of Port Jackson is celebrated.'

He never lost this admiration and affection for Australia. This young man, whose name will be always part of Australian history, was 5 feet 10 3/4 inches in height, and had brown hair, bright blue eyes, an aquiline nose, and sensitive, rather humorous mouth. [3]

When the Guard were landed on 24th May, they marched through George Street, Sydney to their quarters at noon with drums beating and fifes playing.

This was before the Company took over the Coal mines at Newcastle and these men were probably assigned to work as shepherds and agricultural workers at Port Stephens. Six years later the Company exchanged the Port Stephens grant for land on the Liverpool Plains and some of the men were sent to work there. Thomas Casey was reported to have been murdered by aborigines at the Peel River in 1839.

Several of the men who were embarked at the Cape were soldiers who were assigned to the Engineers Department on arrival in New South Wales.

Convicts of the Mariner identified in the Hunter Valley -

1). Patrick McTernan was also employed as surgeon on the convict ships Manlius to Van Diemen's Land in 1828, Katherine Stewart Forbes in 1830 and the Dunvegan Castle in 1832.

2). The three youngest prisoners on the Mariner were all aged 14. - James Cullen was assigned to the Australian Agricultural Company; Edmund Eager to Lieutenant Warner at Portland Head; Edward Mahoney to the Engineers department

3). Jeremiah Murphy and Thomas Cunningham died on the voyage.[4]

4). John Murphy aged 36 from Cork was transported again on the Elphinstone in 1838. (Convict indents)

He remembered his boyhood and his family life. He could barely remember his childhood in India as he had been, in his fifth year, sent with his elder sister to England to live with their mother's sisters. A happy childhood lasted until his fifteenth year when, on his parents' return to England, he was sent to Harrow. Memories of his happy days with his uncle Charles, who taught him the management of small boats; with his sister Susan, with his cousin Isaac Wood, were clouded by the unhappiness and misfortunes of his father, Napier Sturt. Napier Sturt was a judge in Bengal under the East India Company, and it was shortly after his marriage that the prospects of easy wealth, which was the main attraction to India, had been greatly reduced by the impeachment of Warren Hastings. His second son, Charles, was born on 28th April, 1795, in the very month of Hastings' acquittal. A large family--there were eight sons--unsuccessful speculation, failure of an Indian bank, gravely affected the economic position of the family and saddened the family life. He remembered with quiet satisfaction that in respect of family and ancestry he was, in the standard of those times, of good birth.

His career as a soldier began when, at the age of eighteen years, he had, through the patronage of the Prince Regent, been gazetted ensign in the 39th Regiment. Service in the Pyrenees against the French was followed by service in Canada against the Americans, soon ended by the hurried recall of the regiment after Napoleon's escape from Elba. As they arrived in France after Waterloo the regiment served as part of the army of occupation in France until the end of 1818. He had had, therefore, five years of varied experience--the first two on service under active warfare conditions, the last three on garrison duty.

From 1818 to 1825 the regiment was on duty in Ireland, without incident especially affecting his personal career but involving long delay in military promotion. He was twenty-eight years old when he, at last, became Lieutenant; and, at thirty, he became Captain. Then, removed from Ireland to Chatham, he was sent in charge of a detachment of the regiment as guard over convicts on this present voyage to New South Wales, which had begun in December, 1826. .....Charles Sturt - His Life and Journeys of Exploration Author: J. H. L. Cumpston - Project Gutenberg

[1] Ancestry.com. UK, Royal Navy Medical Journals, 1817-1857. Medical Journal of the Patrick McTernan on the voyage of the Mariner in 1827. The National Archives. Kew, Richmond, Surrey.