Robert Dillon brought with him property amounting to £1200 which he intended to use to invest in stock and cultivate the land. He received a land grant of 600 acres on 6th September 1821 and was assigned three convicts to be victualled from the stores at Newcastle to work the land.[1] The location of the grant can be seen on the map below in the bottom right corner.

He selected his land adjoining the farms of James Kelly and eventually established a farm which would later be known as Hinton...... 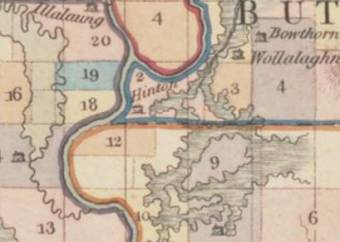 Cross, Joseph. Map of the River Hunter, and its branches showing the location of Robert Coram Dillon's grant.

A partnership was established between Robert Dillon and John Bingle in 1822.....The Memorial of John Bingle and Robert Coram Dillon most humbly shewith - That your memorialists are desirous of establishing themselves at Newcastle for the purpose of opening a regular commercial enterprise between that settlement and Sydney and for supplying the shipping in Port Jackson and the town of Sydney with coals.

That to enable your memorialists more efficiently to carry their views into execution they have to solicit your Excellency's permission to build at Port Jackson a vessel of 50 tons burthen to be employed as a regular packet and trader between Sydney and Newcastle and also that they may be allowed town allotments at Newcastle whereon to erect stores for the security of their goods and the produce of the settlement they may receive in barter or by purchase [1].

In June 1822 they received land in Newcastle to build a commercial house. Bingle and Dillon established the first regular trading service between Sydney and Newcastle carrying coal, cedar and merchandise in the Sally. They were also granted permission to build a 50 ton vessel which was named the Eclipse. The Eclipse was stolen by Convict Pirates in 1825.

Robert Dillon also established a Post Office at Newcastle by 1825, perhaps the first.

Select here to find some of the buildings in Newcastle in 1822.

The Deed for his land in Newcastle, 46 perches in Watt Street, Newcastle (allotment no.2), was claimed by James Reid in 1839 who purchased it from Mr. Bettington. Allotment No. 2 Watt Street can be seen on the map below (click to enlarge) Some of the convicts who were assigned to or employed by Robert Coram Dillon included:

James Fitzgerald arrived on the Sophia. Assigned to R.C. Dillon in 1829

Michael Simpson per Ann and Amelia in 1828 (Hinton)

James Clarke arrived on the Mangles. Assigned to R.C. Dillon in 1828 (Hinton)

Patrick Sullivan per Eliza in 1828 (Hinton)

Patrick Danaher per Eliza in 1828

Robert Lamb per York absconded in 1832

John Knowles arrived on the Hercules in 1832, assigned servant in 1832

Christopher McDonald arrived on the Morley. Assigned to R.C. Dillon until 1832

Amos Lumby arrived on the Hercules in 1832, assigned servant in 1832

John Reid arrived on the Andromeda. Assigned in 1837

Scipio Vanterpool arrived on the Susan. Assigned in 1837

Robert Coram Dillon died in 1841 aged 45 and was buried in the Glebe cemetery at East Maitland.

[2]. Cross, Joseph. Map of the River Hunter, and its branches [cartographic material] : shewing the Lands reserved thereon for Church purposes, the Locations made to Settlers, and the Settlement and part of the Lands of the Australian Agricultural Company at Port Stephens together with the Station of the Mission to the Aborigines belonging to the London Missionary Society on Lake Macquarie, New South Wales