The First Fleet brought the first convict ships to Australia in 1788 in a voyage that took over eight months to complete.

The First Fleet was led by Captain Arthur Phillip.

Ships of the First Fleet

Departure of the Fleet

Captain Arthur Phillip went ahead on HMS Supply in company with Friendship, Scarborough and Alexander.

Captain Hunter transferred to the Sirius and commanded the remainder of the Fleet - Charlotte, Lady Penrhyn, Prince of Wales, Borrowdale, Fishburn and Golden Grove.

More than 160,000 convicts were transported to Australia over the next eighty years.

Voyage Of The First Fleet


Each ship entry on the map above has been compiled from the FIRST FLEET JOURNALS mentioned below. The writers all contribute different perspectives of the voyage depending on their status in life.

The grey weather icons on the Map above are entries from William Bradley's Journal pinpointing exact locations and the weather recorded on the Sirius.

The progress of the Fleet can be followed until 25 November by using these grey icons or the blue Sirius icons. Magnify the map above by scrolling then click on the ship icons to read Extracts from Journals of the First Fleet. Each ship of the Fleet is represented by a different colour. Enlarge the map by clicking the icon on the top right.

To embed this map in your own website, copy the HTML from the share page and paste it in the source code for your page.


To read the complete Journals and transcriptions follow the links below.

Voyage of the Sirius

From the Journals of :

Voyage of the Charlotte

From the Journals of:

Voyage of the Lady Penrhyn

Voyage of the Scarborough

1). John Easty - Pt Jno Easty A Memorandum of the Transa of a Voiage [sic] from England to Botany Bay in The Scarborough transport Captn Marshall Commander kept by me your humble Servan[ ] John Easty marine wich [sic] began 1787', November 1786-May 1793. Digital version:State Library of NSW. Transcription

Voyage of the Friendship

Voyage of the Prince of Wales

Voyage of the Supply

From the Letters of David Blackburn -

The following letter was published in the Belfast Newsletter on 6th June 1788....

The following letter was received from an Officer of the First Fleet. It was dated from Table Bay....

We left Rio Janeiro the 4th of August 1787, nothing material happened until the 19th, when a convict fell over board from the Charlotte transport, and in despite of every effort to save him, was drowned. From that time to the 25th, we had bad weather, rain and heavy lightning. On the 3rd September, we discovered an intent among the seamen of our ship to mutiny; but by the timely exertions of the Commodore and Officers, the ringleader was punished and we were happily relieved from danger. At this time the Charlotte had 30 sick, and the rest of the ships crews, marines and convicts, had many ill; but by the blessing of God, soon after, the weather clearing up, the sick were sent upon deck, which method, with the cleanliness preserved throughout the fleet, proved restorative, health was reinstated among us, and we prosecuted our voyage in high spirits; about this time some female convicts on board different ships, increased the number of souls by an addition of seven children; our Doctor baptized them on an appointed day, and the weather being exceeding fine, the christenings were kept on board the respective ships with great glee, an additional allowance of grog being distributed to the crews of those ships where the births took place.

On the 7th of October the Alexander transport threw out three signals of distress, upon which the commodore ordered our boats to be manned and sent on board. The Captain of the Alexander informed the commanding officer that his men had mutinied, and attempted to release the convicts, in order to strengthen themselves ; but our well timed assistance prevented these desperadoes from affecting their evil intention. Out people secured four of the most daring; and sent them in irons on board the Sirius. The principal part of the marines on board the Alexander being ill, and therefore unable to prevent any attempts they might make after our departure, the next day the Alexander sent two convicts on board our ships, they having been very disorderly the preceding night.

On the 12th of October, to our great joy, we made Table Bay, and our Commodore having ordered the signal to be thrown out for all the ships to come into his wake, the Captains received their instructions for the disposition in which the fleet was entered and moored.

They immediately hoisted their colours, saluting the Commodore as they passed by, sailing into the Bay. Joy now beamed in every countenance, and we congratulated each other on the pleasing prospect of plenty of fresh provisions with abundance of herbs, roots, and fruits, the production of this fine country. Judge then, after a run of 1094 leagues, our happiness at the pleasing scene before our eyes.

In sailing into the Bay our satisfaction was allayed by the loss of the second mate of the Friendship a worthy, character, and a good seaman; he fell overboard, and perished.

On the first of November one of the Lady Penrhyn's women, a convicts, fell overboard, but was saved by our boat; next day we had the further satisfaction of preserving the Dutch seamen belonging to an East Indiaman whose boat was overset in a gust of wind and lost.

Our worthy Commodore, and our agent, to whom the greatest praise is due for their humanity and attention to ourselves, have given public notice to the master of the different ships, to hold themselves in readiness to receive sailing instructions on the 10th December, as it is intended to quit the Cape of Good Hope on the 11th day of December.

We have a plentiful provision of live stock and other necessaries for the new settlement, an enumeration of which I here subjoin, viz, three bulls, ten cows, three stone horses, twelve mares, 120 rams and ewes, four male, 20 female goats 80 dozen fowls, 20 dozen ducks, six dozen of geese, and four dozen of turkeys, corn, wheat flour, garden seeds, spirits, and other necessaries (independent of the live stock) to the amount of 2000l.

The only place proposed to stop at between the Cape and Botany Bay is the island of Desolation, so called from its being a rock on which no herbage grows, in the center of which rock is a beautiful lake of fresh water, a supply of which will be necessary to preserve our live stock. This island was discovered by Captain Cook, and of course named, by that gallant Commander; it has but one port, called Christmas Harbour so called from being discovered and entered into on that day

To be brief our fleet will be in good repair; our seamen, soldiers and convicts are in high spirits. The provision made by government has filled the hearts of the new settlers with gratitude, and now has reconciled them to their fate; the more rational part of them are convinced, that on their arrival at Botany Bay, by industry and attention they will enjoy all the requisites reasonable beings can desire; that the disgrace they suffered in England, due to their crimes, will by good behaviour at Botany Bay be buried in oblivion; that removed from their wicked companions at London, they will have no seducing opportunities to swerve from the cause of virtue; and that in all probability they may be founders of an empire greater than that from which they are banished.

Arrival Of The Fleet In Botany Bay

My Lord,.........
The westerly winds we now had continued till the 3rd of January, when we saw the coast of New South Wales, but the winds, which had been so favourable, having seldom been to the eastward, and then for a few hours only, blowing from the N.W. to the S.W., generally very strong gales, now left us, and we had variable winds, with a current that at times set very strong to the southward, so that we did not arrive at Botany Bay before the 18th (January).

The Alexander, Scarborough and Friendship came in the next day, and the Sirius, with the rest of the ships, the day after. Those ships had continued very healthy.

The Supply, sailing very badly, had not permitted my gaining the advantage hoped from, but I began to examine the bay as soon as we anchored, and found that tho' extensive, it did not afford shelter to ships from the easterly winds; the greater part of the bay being so shoal that ships of even a moderate draught of water are obliged to anchor with the entrance of the bay open, and are exposed to a heavy sea that rolls in when it blows hard from the eastward.-Historical Records of Australia Volume 1, 1788- 1796. p17.


1). Locked in a safe in Sydney's St Philip's Church, the Fleet Bible has been signed by every monarch to visit Australia in the past century. In some cases the Bible was taken to Government House for the occasion. Church rector Reverend Justin Moffatt says the book has an 'extraordinary place in the European history of Australia'. Brought out in the First Fleet, the large leather-bound Bible is inscribed with the address of Botany Bay. It is believed to have been used by chaplain Richard Johnson to conduct the first Christian service in the colony.Bible Museum 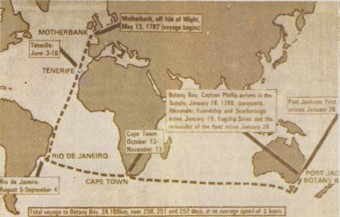 
John White served as Surgeon-General on the First Fleet.