The Louisa was built in Workington in 1810. She carried a crew of 32 men on this voyage. [2] Ninety women were embarked probably early in July 1827. The women had been tried in Stirling, Glasgow, Lancaster, Cumberland, Kent, Bristol, Sussex, York, Aberdeen, Chester, Montgomery, Lincoln, Ayr, Edinburgh,Cambridge, Durham, Devon, Norfolk, Surry and Wilstshire and were probably brought from county gaols to London by carts and caravans. More than a quarter had been tried in London and would have been taken directly to Newgate prison after trial. 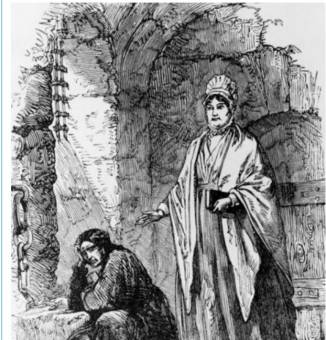 The Louisa departed Woolwich on 24th July 1827 with ninety female prisoners and 21 children from England and Scotland. It was a remarkably fast journey - eighty-four days to Bass Strait, reportedly the fastest passage known at the time.

The Australian remarked that Joseph Cook had been in England only 14 days when he embarked on the Louisa and had returned to the colonies in only a little over nine months.

He kept a Medical Journal from 6th July 1827 to 18 December 1827........ Most of the women gave their calling as servant, nursemaid or housemaid. Some according to the surgeon's journal had been prostitutes. (1)

The first entry was for Elizabeth Dean on 31st July. Elizabeth was 36 years old. She had been in the jail at Hastings and became ill while still at Woolwich. Her illness was exacerbated by drunkenness and she suffered 'rigors' throughout the voyage, although according to Joseph Cook she was in good health by the time she landed.

The next case was that of James Williams, probably the son of Sarah Williams. Joseph Cook recorded the circumstances of the child's death in his journal:

James Williams, aged 15 months, convict's child, taken ill at Woolwich; sick or hurt, dysentery (marasmus), embarked with his mother from Bristol had been partially taken from the breast two days before leaving that place and having been brought here on the top of the coach by exposure during the night and getting wet, was feverish and bad cough; put on sick list 4 August 1827, died 29 August 1827 at 8 pm.

It was around the 18th November when the women were given their first sight of Australia when the vessel reached Cape Otway.

They arrived in Port Jackson on Monday 3 December 1827, a remarkably fast voyage of 100 - 101 days. The Louisa was one of five convict ships bringing female prisoners to New South Wales in 1827, the others being the Grenada, Brothers, Harmony and Princess Charlotte. Over five hundred female prisoners arrived in the colony in 1827

On Thursday 6th December Colonial Secretary Alexander McLeay and Principal Superintendent of Convicts Frederick A. Hely inspected and mustered the women prior to their landing and distribution.

Sarah Radford a house servant from Devonshire who, according to the indent was the fairest lass on board with a fresh fair complexion, dark brown hair and eyes and a good looking ingenuous countenance, was immediately assigned to Mr. Hely.

Sarah Murhens was the youngest prisoner on board. She was just 15 years old and described as 'well looking'.

Her sister was already in the colony having arrived on the Grenada in January 1827.

The convict indents for the Louisa are more informative than most. As well as the usual information such as name, age, religion, education, marital status, family, calling, crime, date and place of trial, sentence and native place there is also occasional information regarding family members already in the colony or expected soon, deaths and other colonial information.

There is also a detailed physical description of each of the women including in some cases extra remarks - thus the details of the comely Sarah Radford mentioned above are revealed. Most of the women were without Sarah Radford's attributes and Alexander McLeay and Frederick Hely were unusually personal in their descriptions -

Ann Manby age 55 had a pock pitted complexion and a black beard!

Mary Muirhead from Scotland was described as a very large young woman;

Lydia Hitchens had an unprepossessing countenance;

Elizabeth Christmas spoke with the right side of her mouth;

Lucy Parkins had lost all the teeth in her mouth

and poor Mary Jones age 48 was described as 'sinister looking'.

The convict indents include the information of where each of the women was assigned on arrival.

The following women were later assigned to settlers....

Jane Brett was assigned to George Wyndham at Dalwood

Prisoners of the Louisa identified in the Hunter region

2). Select here to find out more about Hunter Valley convicts/ passengers of the Louisa.

3). National Archives - Reference: ADM 101/45/6 Description: Medical journal of the Louisa, convict ship from 6 July to 18 December 1827 by Joseph Cook, surgeon and superintendent, during which time the said ship was employed in a voyage from England to New South Wales