The Eliza was built in India in 1806. This was her second voyage as a convict ship having previously transported prisoners to New South Wales in 1827.

The military guard, a detachment of the 40th regiment of Infantry under orders of Lieut. Sweeney, marched on Friday 16th January from Chatham Barracks to Deptford and embarked on the Eliza Saturday 17th January 1829.

After embarking the guard the Eliza departed for Cork to load prisoners.

The convicts of the Eliza came from counties throughout Ireland including Leitrim, Cork, Kilkenny, Roscommon, Mayo, Galway, Tipperary, Limerick. They were inspected by surgeons before being embarked; one prisoner Thomas Kickery was disembarked prior to leaving Ireland. 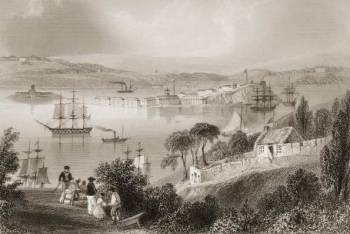 The Eliza was the next vessel to leave Ireland bound for New South Wales after the departure of the female convict ship Edward in January 1829. The Eliza departed from Cork 2nd March 1829

He joined the ship at Deptford in December 1828.

He kept a Medical Journal from 30 December 1828 to 7 July 1829 and had hoped that by the appearance of the prisoners who embarked in Cork that he would not have any mortalities on the voyage............. however the continual damp through the prison which is so well calculated to call forth disease where predisposition exists, I consider myself fortunate that under the circumstance of such damp on the lower deck, scurvy did not in any degree manifest itself. This I attribute to the aggregate of many causes - a good system of victualling, cleanliness, ventilation and exercise.

The conduct of the prisoners was so quiet and tractable that they were permitted to be on deck almost without limit as to number and when the weather permitted were ever ready for any amusement or exercise pointed out to them; also above all the free and frequent use of the hydra chloramine of lime.

He reported three deaths in his journal -

John Limery died of consumption on 5th May 1829.

The Eliza arrived in Port Jackson on Saturday morning 20 June 1829.

A Muster was held on board by Colonial Secretary Alexander McLeay on 24th June 1829. The convict indents include name, age, education, marital status, family, native place, occupation, offence, date and place of trial, sentence, prior convictions, physical description and where assigned on arrival. There are also occasional notes regarding colonial crimes, relatives in the colony, pardons and tickets of leave.

There were some very young prisoners on this ship. Usually young boys were sent to Carter's Barracks, however there is no mention of this on the Eliza and some of them were privately assigned, others were deemed unfit for assignment:
Eugene McCarthy age 11; who was deemed not fit for assignment. He may have been sent to Carter's Barracks
Cornelius Sullivan age 13 years had been convicted of vagrancy. He was deemed unfit for assignment on arrival.
William Bolton age 13; Died at Norfolk Island 5 December 1840
James Baldwin aged 14;
Thomas Mahoney aged 14. No place of assignment against his name. Later he spend time at Norfolk Island

Notes from the Indents:

Charles Carthy age 20 from Limerick. Wife in the colony as Ellen Broderick or Byrne per Edward

David Drinnen age 21 from Cork. Wife in the colony as Joanna Ryan per Edward

William Gahan from Tipperary executed at Bathurst in 1831

William Hanley from Tipperary. In the colony before on the Tyne 1819

Daniel Hickey from Tipperary died at Norfolk Island in 1837

James Hunt - Wife in colony as Mary Hunt per Edward

John Murphy in colony before per Guildford. Wife in colony as Betty Deniher per Elizabeth

In the Hunter Valley the prisoners were assigned to:

1). Following is an excerpt from the Belfast Newsletter about Henry Stapleton from Kilkenny and some of his relatives who were also transported at various times.........

Kilkenny Assizes - George Limmery, John Limmery, Patrick Keeffe, Patrick Rafter and Kenny Stapleton* were indicted for stealing in a warehouse 16 casks of butter, of the value of 50, the property of Richard Aylward Esq. of Kilkenny, butter merchant. The Jury found the prisoners with the exception of Patrick Rafter guilty. Mr. Justice Moore sentenced the prisoners each to seven years transportation. Stapleton exclaimed, Long life to your Honour! I'll be back with you in 18 months. - Mr. Justice Moore - If you do your life will become the forfeit - Stapleton - Oh! It's only with the governor. I'll come back - he knows me well - Mr. Justice Moore - I shall take very good care that you shall not return before the period at which your sentence shall expire. Intimation shall be given to the governor of your intentions and he shall know what sort of character you are. - Stapleton made no reply, and appeared quite chop fallen. This worthy character only returned last summer from serving his apprenticeship to the Governor at New south Wales. He was tried at the Kilkenny Assizes in 1817 for sheep stealing, 1818 for cow staling, and in the same year he was tried for stealing blankets, convicted, and sentenced to seven years' transportation by Mr. Justice Mayne.

As soon as the Learned Judge passed the sentence, Stapleton with a croaking voice, cried out, ' Oh the d- l's luck to your soul! When I come home I'll bring a monkey with me as ugly as your Lordship, and that's saying enough, if I can get him in Botany Bay, and I'll make him a present to your ugly Lordship.' The Learned Judge smiled for the first time in his life at the delicate compliment paid to his beauty, and Stapleton in due time completed the full measure of his sentence. Upon his return to dear Ireland, with his early impressions confirmed, he was true to his word, brought a monkey of the largest size with him and the first inquiry he made was after Judge Mayne. He inquired at the house in which the Learned Judge lived, with the monkey under his arm, and was much chagrined when he was told that his Lordship was on the continent, but he consoled himself by saying that the monkey would make a good present upon another occasion.

Stapleton then proceeded to Kilkenny, and soon joined a gang worthy of such an associate. The premises of a respectable corn dealer were robbed in the early part of the spring of about three hundred pounds - Stapleton was not present upon this occasion, as he was employed in another quarter; but when he ascertained that his partners got a booty, he contrived to get the entire of the money from the captain upon some plausible excuse. He instantly bolted with the money, went to Dublin, stopped at a first rate hotel, and lived like a Prince whilst the money lasted; but he was surprised in all his glory, sent to gaol for the robbery of the butter, and another opportunity was presented to him for disposing of his monkey. Stapleton has, however, one consolation; his brother was transported in the course of the last summer, and another brother and a sister were sent to Botany Bay a short time before, but none of of them had arrived when Mr. Kenny Stapleton left Port Jackson.

The father was in Kilkenny gaol for 16 years, and was afterwards transported for sheep stealing; about ten years ago he died in Sidney Cove. Kenny and his brother were butchers, and as soon as he shall land at Botany Bay the entire family of the Stapletons will be comfortably settled in the Southern hemisphere. Judith Purcell was the name of the sister. She was tried before Mr. Sergeant Lefroy for stealing a quantity of calico; and when the sentenced was pronounced, she vociferated, in a very grating tone 'the d - l burn ye all, Judge and Jury altogether' to the great scandal of the learned Sergeant who is of a very religious turn of mind....Belfast Newsletter 29 August 1828 *the above-mentioned Kenny/Henry Stapleton first came to New South Wales on the Minerva in 1819.


3). Prisoners and passengers of the Eliza identified in the Hunter Valley

Embarked on the Castle Forbes on 5 August 1823 under command of Lt.- Col. Balfour

Embarked on the Mangles on 14 June 1824 under command of Lt.- Col Thornton