The Andromeda departed Portsmouth on 17 November 1832. 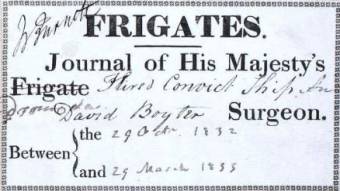 The Guard were embarked in fine weather and under the most favourable circumstances. They were all young men in high health and spirits and completed the voyage without a casualty occurring and were disembarked in the best state of health after a voyage of seventeen weeks.

The convicts were in number two hundred and eighty-six. I received them from the York hulk at Portsmouth. They were mostly young men lately convicted, of very full habit and apparently remarkably clean and healthy at this time. Cholera was very prevalent and fatal on board of the next hulk and from the men having been employed together at work in the dock yard, I was very apprehensive of the disease's appearance on board the Andromeda, but I am happy to remark that with the exception of a mild case of dysentery, not another instance of bowel complaint occurred during the voyage. During the first part of our voyage in crossing the Bay of Biscay we met with a very severe gale of wind, the ship from being just out of port was very ill-provided with tarpaulins and other necessary things to prevent water getting below. The consequence was that the prison was completely inundated and the lower deck was obliged to be scuttled to allow the water to escape below. Many of the convicts were seriously ill from perfect terror but more especially from sea sickness which induced several to the lowest ebb. I was in these cases obliged to administer liberally wine and medical comfort to assist in their recovery. From these circumstances and getting rapidly into a tropical climate sickness prevailed to a greater extent than I had experienced during my two former voyages. [2]

Passengers on the Andromeda included Lieutenant Lonsdale and Lieutenant Armstrong and 29 rank and file of the 21st regt., 5 women and 6 children.

Israel Chapman from the Police establishment and his wife Mary Chapman from London arrived as steerage passengers. In a sly dig at Chapman's past the Sydney Herald on 21st October 1833 reported: Israel Chapman has been appointed Police Runner, an office in itself quite distinct from the ordinary duties of the Town Police. From his extensive acquaintance with the prison population he is infinitely better qualified for such an office than any other person connected with the Police department.. Israel Chapman had first arrived as a convict on the Glory in 1818.

The Andromeda arrived at Port Jackson on 11 March 1833. According to David Boyter's journal, three prisoners had died on the voyage out, all from Continued Synochus. They were John Baker, John Groves and Thomas Kinggett. Another man Robert Ingram died while the ship lay in Sydney harbour.

The prisoners were mustered on board on 15th March 1833. Convict indents include name, age, education, marital status, religion, native place, occupation, offence, when and where tried, sentence, prior convictions and physical descriptions. There is occasional information about pardons, tickets of leave, colonial sentences and deaths, however no indication where they were assigned.

Among the convicts on this voyage were :

James Bennet a violin player
William Buckley, chemist and druggist from the Isle of Wight
Henry Brown a merchant and solicitor's clerk
George Lawrence Howard, Bailiff and Publican
Charles Vaut a 21 year old groom who was born in North America and sentenced to 7 years transportation in Norwich. Charles Vaut would later wreak havoc in the Maitland district before being sent to Port Arthur, Van Diemen's Land.

Prisoners of the Andromeda identified in the Hunter region

1). David Boyter returned to England in August 1833. He was employed as surgeon-superintendent on the convict ships Mermaid in 1830, Camden in February 1831 and the Hero in 1835.

2). Hunter Valley convicts and passengers arriving on the Andromeda in 1833

3).Convict ships bringing detachments of the 21st regiment (Royal Scotch Fusiliers) and Officer in command of the Guard....