The Surry was built in Quebec in 1825. This was her first voyage bringing convicts to New South Wales.

The female prisoners who were transported on the Surry came from counties throughout Ireland including Kilkenny, Cork, Dublin, Limerick, Galway and Mayo. Most were probably held in county gaols prior to transfer to the Convict Depot in Cork to await transportation.

Ten of the women held in Kilkenny County Gaol, five of whom were ordered for transportation, made a serious attempt at escape in May.....

Escape of prisoners - Ten female prisoners - five of whom were under sentence of transportation escaped from our city gaol about twelve o'clock on Saturday last. A small opening was made by displacing a short iron bar from one of the windows in the day room appropriated to the females, through which they passed; they then got on the top of a wall, dropped down in front of Mr. Smithwick's dwelling house, and passed through that gentleman's lodge gate. It has not been ascertained whether the bar was removed within, or by assistance outside. Bridget Delaney and one of the untried prisoners have been retaken at Castlecomer. The prisoners escaped during the absence of Mr. Duncan the Governor, who had gone to Cove to leave convicts on board the hulk Surprise. He arrived on Sunday evening and has been ever since in pursuit. [2]

Twenty year old Bridget Delaney mentioned above was later transported on the Surry.

By the time female convicts reached the depot at Cork they were often debilitated from long incarceration and poor diet, although the following extract from the Report of the Inspectors General on the Gaols of Ireland reveals they were put to work when they reached the Depot......

There was a devastating outbreak of cholera in Ireland in 1832. It was believed by some that the distraction of music and dancing could diminish the spread of the disease......

Since the introduction of cholera into the county gaol of Cork, a novel method has been adopted to prevent its spreading. A musician is engaged to play for the female prisoners (to whom the epidemic is entirely confined) for a few hours every evening; they are all brought together into one of the largest apartments in the prison, and such an interest is excited amongst them by the music and the dance, that they appear to forget altogether the cholera and its terrors. This mode of prevention was suggested by the idea, that as fear is a predisposing cause, nothing could tend more to diminish its influence. The same method has been tried at the convict depot, and with success. [1]

The female prisoners to be embarked on the Surry in 1832 were inspected at the depot in Cork before embarkation and although some were found to be suffering debility 'the consequence of dissolute habits and very low diet at the depot', all were taken, as the surgeon thought 'better food and sea air would be useful to them' [4].

Edward Ford Bromley kept a Medical Journal from 25 August 1832 to 28 March 1833 which reveals that the women on the Surry probably endured a very uncomfortable voyage.

He thought little of the women and gave a very unflattering description of them. He thought that Irish female convicts were 'very inferior to English women of the same class'. He had difficulty stopping them from smoking below decks and to keep themselves clean. Out of 141, only 100 could 'tell their letters' and about '5 write and 10 read'. They were mostly 'taken off the town as common prostitutes, the rest the lowest descriptions of burglars and petty thieves, hardened and old offenders'.

Half a pint of wine was issued to each, twice a week, and was always followed by 'drunkenness and rioting'. The surgeon recommended that this practice should be stopped as producing no good but 'much mischief'. He also recommended that iron collars should be supplied since one girl took off her wooden one and threw it overboard; and that handcuffs and gags should also have been furnished.

The charter party did not provide candles or lanterns for going below into the prison or hospital and the surgeon had to provide his own. He complained that the 'security box or black hole' was not secure and that one woman burst out of it. To prevent this he put a chain round the box with a strong padlock. He suggested a straight jacket should also be provided. [4]

Below is an iron maiden that may be similar to that used on the Surry to punish the women. 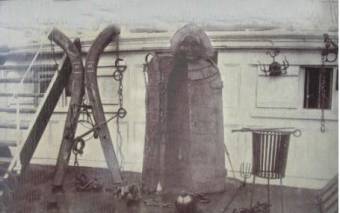 On 16 February 1833, the sugar ran out and on 24 February the wine ran out, and 'this was the signal for a tremendous riot, fighting and quarrelling of every description'. One woman tried to stab a seaman and three of them had to be severely punished. The surgeon repeated his plea that the issuing of wine should be abolished since it has been 'nearly the cause of all the riots in the ship'. Catarrh prevailed a good deal in February because of the cold winds. [4]

Free Passengers on the Surry included 19 females and 40 children.

Names of the free women embarked on board the ship Surry.........

The Surry arrived at Port Jackson on 9th March 1833 with 141 female prisoners and 11 of their children. The women were landed on Monday 25 March and assigned to their various employments. An underwhelming account in the Monitor reported them to be a stout set of women who were generally clean.


Prisoners of the Surry identified in the Hunter region


1). The Surry was one of five convict ships bringing female prisoners to New South Wales in 1833, the others being the Fanny, Caroline, Buffalo and Diana. A total of 639 female convicts arrived in the colony in 1833.

3). Hunter Valley convicts and passengers arriving on the Surry in 1833

4). The Chequered career of William Whitehill (convict husband of Julia Whitehill) by Alfred James in the Illawarra Historical Society Bulletin 1 May 1974