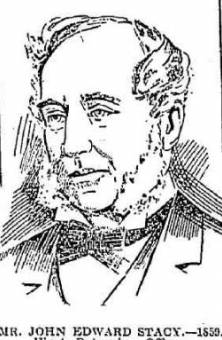 John Edward Stacy arrived in Australia on the Magnet in 1828 with his wife Jane and their child. He was employed as company surgeon by the Australian Agricultural Company. Others employees of the A.A. Co., who came on the Magnet included Thomas Hewitt, Thomas Sawkins, Benjamin Stacey and John Swayne.

On his arrival at Carrington, Port Stephens the Stacy family resided with the other families, the hospital wardsman and the patients in the hospital while they awaited suitable accommodation. Sir Edward Parry thought the hospital no more than a shed.

John Stacy was also a keen botanist and early in his time at Port Stephens established gardens where he planned to grow Tobacco, Olives and Poppies. According to Sir Edward Parry botany was Stacy's forte rather medicine. Two of the convicts assigned to him at Port Stephens were farmer's man Thomas Emmett who arrived on the Manlius in 1827 and Anthony Tunsil a gardener who arrived on the Roslin Castle in 1833.

John and Jane Stacy became friends with the family of Lieutenant William Caswell during their years at Port Stephens. Dr. Stacy attended Susan Caswell during her many pregnancies and the childhood illnesses of the family. Later, in 1859 his son Henry Stacy married William and Susan Caswell's daughter Caroline at Christ Church Cathedral, Newcastle.

John Stacy made plans to settle at the Peel River in 1835. Although convicts were assigned to him at the Peel in 1836/37, he does not appear to have settled there.......

'We understand that Mr. Stacy, Surgeon to the Australian Agricultural company, at Port Stephens, intends settling with his family at Peel's River, for the purpose principally of turning his attention to the culture of Medical plants; but we hope that he does not intend to give up the lancet for the spade, as his professional abilities will prove highly advantageous to the neighbouring settlers. While we admire the independence of Mr. Stacy's feelings, we cannot but regret that a pupil of Sir William Blizzard, and Mr. Headington under whom Mr. Stacy walked the boards of the London Hospital, and whose undeniable approbation he attained, should seclude himself with his family in the bush. We wish Mr. Stacy success in his undertaking, and hope he may never repent having thrown up a good practice in England, to become a settler at the Antipodes.' [1]


He acquired 500 acres at Upper Rowlands Plains near Port Macquarie in 1839. He settled there and began a medical practice. He was visited there by traveller Clement Hodgkinson who was on an overland journey from Port Macquarie to Newcastle:

I passed the fine water mills belonging to Messrs. Freeman and Gorum, and arrived just after dusk at Dr. Stacy's where I stopped for the night.

As the alluvial plains of the Wilson are subject to occasional floods, Dr. Stacy has built his house in a very judicious manner, on strong wooden pillars, sufficiently high to be far beyond the reach of the highest floods. These pillars, being connected by weather boards, form underneath the house a sort of outhouse or store room, which can be easily thrown open on the approach of floods, so as to offer no impediement to the water, whilst a covered wooden gallery, in the Swiss style, surrounds the upper portion of the building in which the family resides.[2]

In the 1840's Dr. Stacy was established at Newcastle as Surgeon-General. The family lived in Newcomen Street. He was Magistrate and Coroner for the town as well as government health officer. He played a prominent role in town functions and celebrations over several years. On one memorable occasion in February 1847 he attended a dinner at the Victoria Hotel in honour of Sir Charles Fitzroy.

In May 1848 he accompanied surveyor Mr. Charlton in Traversing the Newcastle boundaries.

Despite his involvement with the community, he maitained his medical practice. On one occasion he attended immigrant Eliza Milner who was employed by Rev. Wilton at Newcastle. Benjamin Harris, also in Reverend Wilton's employ, had poured boiling fat over the girl's head. The wounds extended from the head and down the back over one side of the face terminating at the chest. Dr. Stacy attended her daily for over a month. Later, when Eliza appeared in Court she was asked to remove her bonnet when a 'most frightful' scald was observed. One of her eyes was also disfigured and the girl's sight, Dr. Stacy said was only preserved by the extreme attention paid to the girl by the benevolent and watchful Wilton family.

One of their daughters Ellen, married Mortimer William Lewis, son of the Colonial Architect in 1847. Jane Stacy and two of the Mortimer grandchildren died of scarlet fever at the Stacy residence at Newcastle in 1854.

On 4th February 1858 John Stacy married Elica Antonia, the eldest daughter of John Nicholas Beit. They had two sons together and in 1860 moved to Parramatta and then Toowoomba.

John and Elicia Stacy sailed to England on the Highflyer in 1872.

5). Plarr's Lives of the Fellows Online