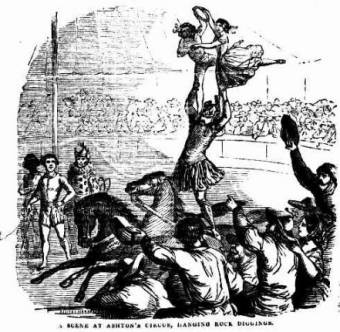 Sir Thomas Mitchell entered the Peel Valley by the old stock route through the Peel Range. He met Joseph Brown at 'Woolomin', camped at Goora (Somerton) and crossed the' Nammoy' (Namoi)

Shearing commenced at Peel River. Before this facilities were not set up at the Peel and the sheep were driven along the track known as the Peel Line to Port Stephens.

The Australian Agricultural Company imported 30 mules and 12 drivers from Valparaiso. They were used to take wool to Port Stephens

Travelling from Sydney to Tamworth in 1855

Tamworth connected to Sydney by telegraph

Harness and saddle maker B and G. Moses


Oakenville Creek 1854 The illustration represents a scene of very frequent occurrence at these diggings. A stray clergyman is performing divine service in the open air to an attentive audience, among which may be perceived a sprinkling of native blacks. While the parson is perhaps settling dialectically some knotty point of controversy, two men in tile back ground are settling pugilistically some old quarrel or disputed claim. For such affairs, indeed, Sunday is set apart as the regular settling day- especially during the absence of the efficient Commissioner, Mr. King.

In and Around Tamworth - Town and Country Journal - 1906