Convicts embarked on the Florentia came from counties in England, Scotland and Wales. They were conveyed from prison hulks to the vessel early in August 1830.

The Florentia departed Ireland on 15 August 1830.

The Guard consisted of soldiers from several different regiments who were on their way to India; 4 women and 5 children, under the command of Lieutenant Maliam who was accompanied by his wife.

This was Andrew Henderson's first voyage as Surgeon Superintendent on a convict ship. He kept a Medical Journal from 16 July to 27 December 1830. 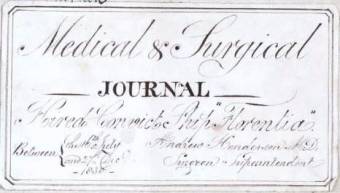 Four prisoners died on the passage out. They were mentioned in the surgeon's journal and the convict indents......

John Brown (alias Horton) age 54 is mentioned in the surgeon's journal - At 3pm, Brown received a severe wound from a musket ball which fractured the neck of the thighbone (femur). He was carefully attended by the surgeon however died at 2.30 on 23 September 1830.

John Brown age 39 a careworn looking man whose appearance indicates him having been in better circumstances of other convicts died on 5th December 1830 of phthisis.

The Florentia arrived in Port Jackson on 15 December 1830.

The convicts were mustered on board by the Colonial Secretary on 17 December 1830. The indents include the name, age, religion, education, marital status, family, native place, occupation, offence, date and place of trial, sentence, prior conviction, physical description and where assigned on arrival. There is also occasional information as to colonial sentences, deaths and pardons.

1). The Florentia brought to the colony the news of the July Revolution in France. The Monitor reported 7000 people had been killed in Paris.

2). Convict Thomas Burdett of the Florentia was executed for the murder of William Noble in Clarence St. Sydney in August 1844

3). Michael John Davis was an attorney age 40 sent for obtaining goods under false pretences. He was the foster father of Edward Davis the leader of a gang of bushrangers who became known as the Jewboy gang. (Australian Dictionary of Biography)

4). Bushranger John Smith arrived on the Florentia as did convict surgeon Patrick Montgomery

6). Hunter Valley convicts / passengers arriving on the Florentia in 1830