Most were probably held in county prisons or Newgate before being transferred to one of the hulks to await transportation. Some of the men who had been tried at the Old Bailey in April and May 1820 were sent to Newgate. They were taken from Newgate on 21st July and sent to the Bellerophon hulk and on 23 August 1821 were transferred to the Asia.

Most of the men were in their 20s and 30s however two were only fourteen years old - Thomas Reed and Walter Preddy and there were several who were 15 and 16 years old. John Hill was the oldest at 56 years of age. 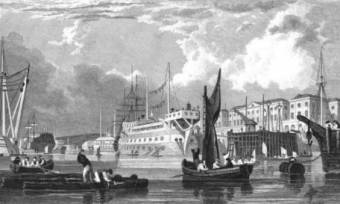 The large Vessel in the centre is the Captivity, this was formerly the Bellerophon man-of-war, of 74 guns, to which ship, when commanded by Captain Maitland, and cruising in Basque Roads, off Rochefort, the Emperor Bonaparte surrendered himself, about six o'clock A.M. on the 15th of July, 1815.* Near the margin, on the left, is the Sheer-hulk, used for fixing the masts and rigging of the vessels in the harbour.

The Bellerophon was paid off and converted to a prison ship in 1815. She was renamed Captivity in 1824 to free the name for another ship. Moved to Plymouth in 1826, she continued in service until 1834, when the last convicts left. The Admiralty ordered her to be sold in 1836, and she was broken up.

This was William Bell Carlyle's first voyage as surgeon superintendent on a convict ship. His medical journal does not seem to have survived however he made a total of six voyages on convict ships over the next ten years and the journals from those voyages are available.......Henry in 1825, Morley in 1823 (VDL) Andromeda in 1827 (VDL), Phoenix in 1828 and Marquis of Huntley. Hundreds of convicts arrived in the colony under his care in those ten years, and in all that time he lost a total of only seven prisoners.

The Guard consisted of 1 non-commissioned officer and 30 privates belonging to the 30th, 34th and 69th regiment under the command of Captain Mann of the 30th regiment.

Other convict ships bringing detachments of the 34th regiment included

The Asia arrived in Port Jackson on Tuesday 26th December 1820 with 189 male prisoners all in good health. One prisoner had died on the passage out.

The prisoners were landed at sunrise on the morning of 5th January 1821 together with the men from the Almorah. They were inspected by Governor Macquarie who was accompanied by Commissioner Bigge, in the Jail Yard at 10 o'clock. The Sydney Gazette reported that........

They were inspected by His Excellency the Governor who expressed to the Commanders and Surgeons of each vessel the highest satisfaction at the appearance of the men, who one and all testified to His Excellency their gratitude to the Gentlemen to whose care and tenderness they had been confided by a benign and merciful Government, in the most lively terms of heartfelt praise, acknowledging they had experienced universal kindness and general attention; indeed, their particularly healthy appearance fully confirmed the expressions of their grateful feelings, which spoke more than language was capable of giving utterance to. [1]

Departure of the Asia from the Colony

1). Gilbert MacLeod was a Glasgow printer and became involved in the 1820 radical uprising in Scotland. He published a newsletter called 'The Spirit of the Union' and with several other men was arrested and convicted of sedition in Edinburgh in March 1820. He was kept in close confinement before his trial.

In correspondence to The Examiner dated 11 March 1821, a friend of MacLeod's described the ordeal after trial....In the meantime my unhappy friend was dragged from his prison manacled and with every circumstance of indignity, linked to felons and wretches of the most abandoned description and shipped for Sheerness. He too a man of the acutest sensibility and delicate constitution. Only imagine, Mr. Examiner, for a moment what must have been his feelings on the occasion! He ultimately was sent to Botany Bay, whither he sailed six months since. By this severe measure a wife and family have been thrown destitute, thus 'visiting the sins of the father upon the children' It now turns out that his sentence was illegal as well as unjust; for by the laws of Scotland banishment is the hardest punishment inflicted for libel but the Judges have in this case, as well as some others, within the last thirty years strained a point, and banishment has become transportation. Would that this abuse had been discovered sooner! Then an individual beloved for his virtues and respected for his talents by all who had the pleasure of his acquaintance would not have been cruelly torn from society and all that he loved. - CASE OF OPPRESSION . The Examiner (London, England), Sunday, March 11, 1821; Issue 688. British Library Newspapers, Part I: 1800-1900

Gilbert MacLeod was sentenced to the unusual term of five years transportation. He was received on the Retribution hulk from Edinburg on 26 July 1820 with sixteen other prisoners from Scotland most of whom were thieves and petty criminals. He was sent to the Asia for transportation on 22 August 1820. In New South Wales, he was assigned to Mr. Wylde and then recommended to be re-assigned to Postmaster George Panton in 1822. Gilbert's wife Catherine and daughter Helen and son George arrived free on the Mary Ann in 1822. In the 1823 muster of convicts they reside together and Gilbert is employed as a schoolmaster.

Gilbert MacLeod was pardoned 2 June 1823 and permitted to return to his country. (HRA), however he applied for a grant of land in 1824 as he had decided to settle with his family in the colony. (CSI). He was granted 320 acres in the Parish of Stockrington (Mulbring) In 1827 he was employed as a Clerk by the Branch Eagle British and Colonial Life Assurance Company.

On 3 May 1828 The Monitor announced the death of Deputy Sheriff of the Colony Gilbert McLeod at his house in Sydney after an illness of only a few days, leaving a widow, son and daughter to lament his loss. ';We fear the widow is not a rich legatee. We trust the benevolence of his friends will be found in exercise on so distressing an occasion'. Gilbert MacLeod was buried on 3 May 1828 age 37. In the 1828 census (November 1828) Catherine is aged 40 and lives in a house at Prince St. Sydney. Catherine MacLeod died at her residence Prince Street Sydney in April 1829. - The funeral of Mrs McLeod, relict of the late Mr. Gilbert McLeod, some time Under Sheriff of the Colony, a gentleman of respectable literary acquirements, and whose premature decease was lamented by all to whom he was known, took place yesterday morning and was attended by a few select and respectable friends. Mrs. McLeod never was in a good state of health since the death of her husband, whose loss she survived scarcely one year. (SG 4 April 1829) Gilbert MacLeod’s land grant was held in trust by Charles Cowper and John Betts for his daughter Helen MacLeod. Helen married engineer William Anstruther Maingy in March 1830 and William and Helen then migrated to Canada in 1831. .

See The Radical Rising: The Scottish Insurrection of 1820 By Peter Berresford Ellis, Seumas Mac a' Ghobhainn.

Principals of the Criminal Law of Scotland

3). Convicts and passengers of the Asia identified in Hunter Valley region

Prisoners of the Asia in the Hunter Valley