The Guard consisted of 2 sergeants, 1 corporal and 30 privates of the 4th regiment, 7 soldiers wives and 10 children. 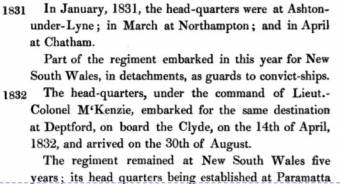 The Clyde departed Portsmouth on 9 May 1832. They were in the vicinity of Madeira on 23 May when Captain Munro boarded the Portuguese brig of war, Conde de Villa Ker which was blockading Madeira.[1]

The Clyde arrived in Port Jackson on 27 August 1832. One hundred and ninety-nine prisoners were landed on 6th September 1832.

A muster was held on board by the Colonial Secretary Alexander McLeay on 29th August 1832.

There were seventeen prisoners under fifteen years of age. The youngest were James Jones (13), Thomas Farnell (13), Henry McCourt (12), and George Beare(12).

Departure From The Colony

The Clyde was advertising to sail for Valparaiso in September 1832.


2). Select here to find out more about Bushranger James Marshall of the Jewboy gang


3). Hunter Valley convicts arriving on the Clyde in 1832

Clyde departd Portsmouth 9 May 1832. Commander of the Guard Lieut-Colonel Mackenzie

Eliza departed Cork 10 May 1832. Commander of the Guard Lieut. Hewson