Voyage: 123 days
Deaths 1
Surgeon's Journal: yes
Previous vessel: Kains arrived 11 March 1831
Next vessel: Waterloo arrived 30 April 1831
Master F. Manning.
Surgeon Superintendent David Thompson
Follow the Female Convict Ship Trail
Prisoners and passengers of the Earl of Liverpool identified in the Hunter Valley
The Earl of Liverpool was the next convict ship to leave England for New South Wales with female prisoners after the departure of the Kains in July 1830.

The Earl of Liverpool proceeded to Woolwich at the beginning of November 1830 and soon afterwards 46 female prisoners were received on board from Newgate. From other parts of England and Scotland more women were received making the total number embarked 89 - 90. Sixteen of the prisoners' children were embarked with them.

The weather was cold and damp and previous to proceeding to sea on the 3rd December 1830, several women had become affected with complaints mostly slight, evidently from change of situation, diet etc to be expected amongst women crowded together on board ship. One woman who had suffered from Catarrh at the time of coming on board had a severe attack of spasmodic asthma and was more or less subject to that disease during the whole voyage. Several children suffered from complaints of the bowels. Many women suffered severely from sea sickness followed by dyspepsia and debility. To a very great number of women it became necessary to administer purgative medicines obstinate constipation being very common from the nature of the diet and the little exercise women in general can be induced to take on board ship.

The lower deck for the prison was always kept in the cleanest possible state and dry except in bad weather and hanging stoves were employed to remove damp. The women were encouraged to keep their persons and clothes clean, two or three days in the week being appointed washing days. Nothing but what might be anticipated in so long a voyage occurred, the behaviour of the women was with very few exceptions quiet and orderly and in every respect the voyage terminated as satisfactorily as could be expected. Three of the women gave birth, with one of the infants later dying. One woman Maria Tinne died on the 6th March 1831 and another was sent to hospital in Sydney on arrival.[2]

The Earl of Liverpool arrived in Port Jackson on Tuesday 5 April 1831 with 88 female prisoners and had the distinction of being the first brig to ever bring prisoners to the colony.

Eighty-seven women were mustered by the Colonial Secretary Alexander Macleay on 7th April 1831. The indents include the name, age, religion, education, marital status, family, native place, occupation, offence, when and where tried, sentence, prior convictions, physical description and to whom assigned on arrival. There is also occasional information such as pardons, relatives already in the colony, deaths and colonial punishments.

They were landed on Friday 15th April, ten days after arriving and immediately sent to their situations assigned to them by the Colonial Government.

Mary Roberts was admitted to Sydney gaol the following day. She was to be sent to the Female Factory at Parramatta for 1 month in the 1st Class. On 17th April Sarah Pepperall, Catherine McGilvray, Mary Kelly and Frances Matthews were all also admitted to Sydney gaol, however probably not for misbehaviour as they were en route to Newcastle for private assignment. [1]

On the 19th April the Sydney Gazette reported that: - Elizabeth Smith, an importation by the Earl of Liverpool, who made her first appearance ashore on Friday last was charged with insolence to her mistress. It appeared that the prisoner was assigned direct from the ship, to the service of a gentleman in Sydney, to whose house she was sent on the day she landed. In the afternoon she obtained permission of her mistress to go out on some business of her own, for a limited time, which she exceeded, and on being reprimanded on her return home, told her mistress she was ' a-good-for nothing hussy,' and that she (Elizabeth) ' knew by the cut of her jib' that the service would not answer her. The bench sentenced her to the third class in the Factory for three months. Elizabeth Smith had been assigned to William Foster in Sydney on arrival. 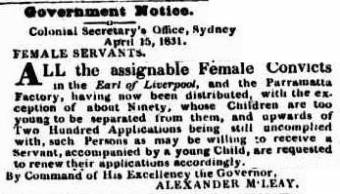 
The following women have been identified in the Hunter Region:

Notes from the Indents

The indents provide details of those women who had relatives on board or already in the colony. Some may have been fortunate enough to be assigned to their relative or perhaps nearby

Thirty of the prisoners had been convicted in Scotland.......

1). Report of the Committee of the Society for the Improvement of Prison Discipline and for the Reformation of Juvenile Offenders (London, England) 1832


2). Sophia Sauces a married forty year old distiller and native of Amsterdam was convicted of forgery at the Demerara-Essequibo court of criminal justice and sentenced to 7 years transportation

[2] Ancestry.com. UK, Royal Navy Medical Journals, 1817-1857. Medical Journal of David Thompson on the voyage of the Earl of Liverpool in 1831. The National Archives. Kew, Richmond, Surrey.