IT IS OVER TWO HUNDRED YEARS since convict Walter Preston was granted an Absolute Pardon in New South Wales. His many years of servitude finally over, he may have left the colony and returned to England, however there is no record found of his departure. The last mention of him is in a convict list dated 1821 in which he is employed by surgeon Darcy Wentworth.

Walter Preston was born about 1787, perhaps in London. At some point in his youth he acquired a knowledge of the art of etching and engraving, perhaps as an apprentice or maybe from a family business. He could probably have lived out a relatively comfortable existence in London, however his descent into a life of crime led him down a path of punishment and deprivation for many years.

He was exiled from his native land however England's loss was Australia's gain as his skill in the form of numerous engravings helped to contribute a lasting legacy for Newcastle and Sydney.

Walter Preston first came to the attention of the authorities in London in June 1810 when he was charged on suspicion of belonging to a gang of robbers. He was taken to the Bow Street Police Station but may have been released at this time. The following account of his arrest was recorded in the Hampshire Chronicle in June 1810.....

[1]
In February 1811 he was arrested again and indicted for feloniously assaulting John Kennedy in the king's highway on the 18th of February , putting him in fear, and taking from his person and against his will, a seal, value 1 s. 6 d. a watch key, value 6 d. and part of a steel watch chain, value 6 d. his property.

He was tried at the Old Bailey on 20 February 1811. His claim of innocence wasn't believed and he received a Sentence of Death. 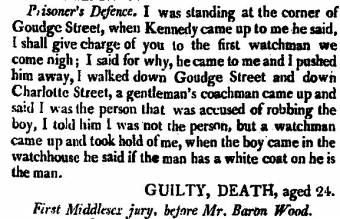 [2]
The sentence of Death was respited to Transportation for Life and he was sent to the Retribution hulk on 23 May 1811.

The Guildford departed 3 September 1811 and arrived in Port Jackson on 18 January 1812.

There are no records to confirm, however on arrival Walter Preston was probably assigned to Absalom West in Sydney. Absalom West was an emancipist - a respectable and prosperous brewer with an enterprising project already well underway with the assistance of artist John Eyre.

Absalom West's project would become the first locally published topographic printmaking venture in Australia - Views of New South Wales. The set consisted of 24 plates, published at various intervals between November 1812 and September 1814 and accurately depicted the growing towns of Sydney, Windsor, Newcastle and Parramatta, as well as landscapes surrounding the settlements. [4]

A small notation on the etching 'View of Shark's Bay in New South Wales' Published 30 November 1812 by A. West in Sydney reveals that it was etched by W. Presston (sic) and drawn by John Eyre.' [6]

By the notice below perhaps another employee was indisposed, so Walter Preston's arrival on the Guildford was a fortuitous circumstance for West -

ABSALOM WEST, Proprietor of the Copper Plate Views of Sydney, and its adjacent admired Campaign, respectfully begs to apologize for the impracticability of publishing so early as expected, owing to the sudden indisposition of one of the Persons employed in their Completion. Notice will in consequence be next week given of the particular day on which the present Subscribers will be furnished with Copies; and the Proprietor takes the liberty to request, that Ladies, Gentlemen , and others, who may wish to patronize this first Specimen of the Graphic Art presented to the Inhabitants of the Colony, will be pleased to forward their Names as soon as possible, in order that the required number of Impressions may be ascertained. Sydney Gazette 5 December 1812

Walter Preston remained in Sydney for nearly two years, however in January 1814, having been found guilty of a colonial crime he was sentenced to two years at Newcastle penal settlement. He was sent on the Estramina on 8 January with three other miscreants - Henry Goucher who also arrived on the Guildford, Catherine Connor per Canada and Joseph Ryan per ship Ann 1810.

Walter Preston was put to work at the lime burners camp. This was notoriously difficult work and in December 1814 he absconded in company with several other prisoners, John Bricks, Isaac Walker, John Lee and Thomas Desmond. These men were some of the most desperate and notorious bushrangers of the time. A Notice to Apprehend was soon issued -

Public Notice - The Persons under named, being Convicts who absconded from Newcastle, all Persons are hereby cautioned against harbouring, employing, encouraging, or in anywise maintaining any or either of the. said Persons on Pain of Prosecution ; Francis Purcelle, and Walter Preston, by the Guildford ; John Bricks, by the Archduke Charles ; Isaac Walker, by the 1st Gambier ; John Lee, by the 2d Gambier ; and Thomas Desmond, by the Atlas ; all of whom absented themselves from the lime-burning Gang, on the 25th of November ultimo. All Constables and others are hereby required to do their utmost Endeavour in apprehending or causing to be apprehended all or any of the said Fugitives. W. Hutchinson, Principal Superintendent. - [7]

They were all captured, punished with fifty lashes, and returned to the settlement. Newcastle penal settlement was under command of Lieutenant Skottowe when Preston arrived however Lieut. Thomas Thompson of the 73rd regiment took over from February 1814 and remained until June 1816.

Captain James Wallis took over command at Newcastle in June 1816. James Wallis was a keen artist with an ambitious project in mind and Walter Preston's fortunes improved from this time.

He was set to work engraving the plates for James Wallis's An historical account of the Colony of New South Wales.....

An Historical Account of the Colony of New South Wales and its dependent Settlements in illustration of twelve Views engraved by W Preston, a Convict, from Drawings taken on the spot by Captain Wallis of the 46th regiment. To which is subjoined an accurate Map of Port Macquarie and the newly discovered River Hastings By J Oxley Esq Surveyor General to the Territory. The Engravings in this Volume are curious and interesting as being the first specimen of the graphic art which this infant community has produced. They are engraved on the common sheet copper used for ships it being impossible to procure a single copper plates fit to engrave upon in the Colony . - Gentleman's Magazine 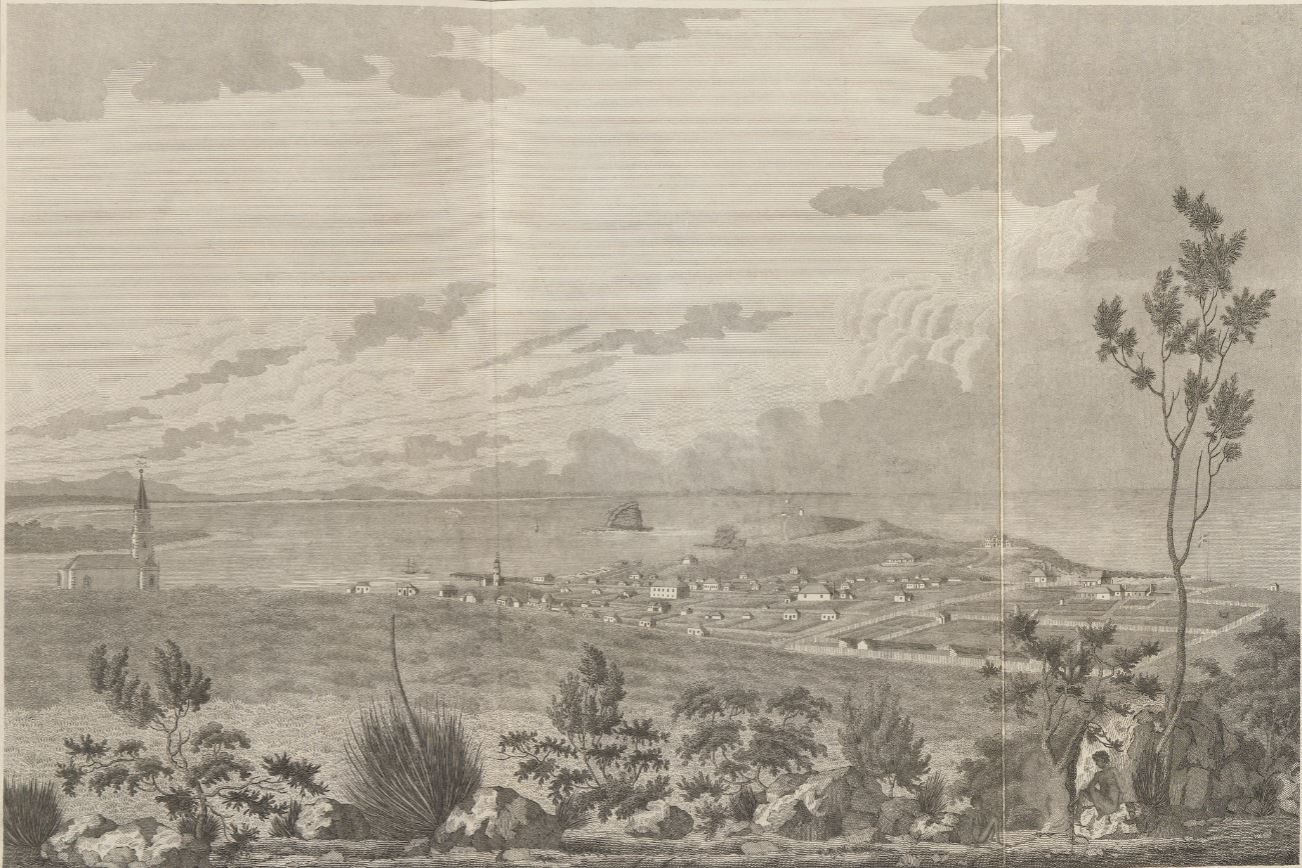 Captain James Wallis was relieved at Newcastle by Captain James T. Morisset of the 48th regiment and returned to Sydney on 19th January 1819. He departed the colony on the Tottenham on 3rd March 1819.

He had a close call in December 1819 when he was apprehended with Mary Baker (arrived per Broxbornebury) and charged with stealing various articles of stationary the previous September, perhaps at Newcastle. Walter Preston was acquitted however Mary Baker was sentenced to Newcastle for a further 12 months.


In an 1820 Muster Walter Preston is still recorded living at Newcastle. In the Muster in 1821 he is employed by Darcy Wentworth.

Walter Preston's date and place of birth are unknown. There are many avenues by which he could have received his training in engraving; the following family business of John Preston and son Thomas is one possibility. -

Preston and Son. John Preston, the founder of the firm, was, according to the directory of 1774, then established at 9, Banbury Court, Long Acre, as musical instrument maker, and possibly as music publisher, though I have as yet found no music bearing this address on the imprint. In 1776, he was at 105, Strand, near Beaufort Buildings, publishing books of Lessons for the guitar, etc. He advertises ' the greatest variety of new music and musical instruments, ruled paper, etc., wholesale and retale.' In 1778 he had removed to 98, Strand, a mistake in the directory possibly for 97, for at this latter number the firm remains from before February, 1781, till about 1822. John Preston's business soon became an important one, and he published a great quantity of the best music of his day. In 1789, Preston, who had just taken his son Thomas into partnership, bought the whole plates and stock-in trade of Robert Bremner, and had additional premises at Exeter Change. Between 1798 and 1801, John Preston disappears from the firm (though in some instances the old style, Preston and Son, is used), and Thomas alone remains. In 1823 Thomas Preston had left the Strand and was at 71, Dean Street, Soho, where he remained until after 1833. In 1837, Messrs. Coventry & Holliers have possession and are re-publishing from Preston's old plates. The Preston publications are very numerous. They include a great number of the English operas in oblong folio and the usual popular sheet music, besides a long series of Country Dances in yearly sets of twenty-four for the violin in oblong 8vo. This series started with the set for 1786 and reached down to at least 1818. British Music Publishers, Printers and Engravers

Joseph Backler arrived on the Portland in 1832

Thomas Bock arrived on the Asia in 1824

Richard Browne arrived on the Providence in 1811

Theodore Constantini arrived on the Ocean in 1823

John Eyre arrived on the Canada in 1801

Francis Fowkes arrived on the Alexander in 1788

William John Lancashire arrived on the Barwell in 1798

Joseph Lycett arrived on the General Hewitt in 1814

George Edward Peacock arrived on the Prince George in 1837

Walter Preston arrived on the Guildford in 1812 (engraver)

Charles Rodius arrived on the Sarah in 1829

Richard Read senior arrived on the Earl Spencer in 1807

Philip Sleagar arrived on the Duke of Portland in 1807 (engraver)

Thomas Watling arrived on the Royal Admiral in 1792