Use the Search Box above to find your Hunter Valley Ancestor.
Lieutenant Thomas Thompson was appointed Commandant at Newcastle in February 1814. He arrived at Newcastle on 16th March 1814. Just one month later four convicts made a daring escape from the settlement. Pursuit of the absconders was hampered by the lack of vessels available as he later explained to Governor Macquarie -


Newcastle 16 April 1814,
Sir,
I beg leave to state for the information of His Excellency the Governor that the under-mentioned prisoners, Edward Scarr, Joseph Burridge, Herbert Styles and John Pierce all of whom are sailors effected their escape from this settlement on the night of the 7th April at about 11 oclock with a strong ebb tide and breeze from the NW in the sloop Speedwell.

The following stratagem I have since learnt they adopted to effect their object. I had sent the launch in the morning up the river to bring down a load of posts and railing. In returning she ground on a flat about half a mile from the camp. As the night appeared very boisterous and fearing she might receive some damage, I directed the Camp Overseer to go with four steady men at high water to get her off. (The Camp Overseer) sent the above mentioned people. They cut out the launch and went alongside the sloop Speedwell under pretence of having been sent by me to borrow a grapple to assist in getting her off. The Master contrary to the port regulations allowed them to come on board as appeared by the enclosed deposition they knocked him down and secured the other one, the sloops crew having slept on shore also contrary to port orders.


They took possession of the vessel without creating any alarm on shore and immediately got her under weigh. The Military patrol seeing her under sail gave the alarm to the night constable. The pilot and the camp overseer were informed who reported the circumstance to me. I proceeded directly to the beach and found it to be the sloop Speedwell ; and should have been able to have retaken her had there been a boat on the settlement sea worthy.

I however sent out a boat belonging to Assistant Surgeon Evans, the only one on the beach, with a party of Soldiers and the pilot to attempt to retake the sloop, but she being small and in a leaky shattered state, the party were nearly swamped before they could reach the shore. I also beg leave to call His Excellency attention to the want of ammunition for the two six pounders there not being a single round for them on the post. Even after the return of the boat, had I ammunition I might have disabled her as she appeared to be then within shot. I trust His Excellency will see the necessity of furnishing the settlement with boats otherwise the vessels can never be secure. 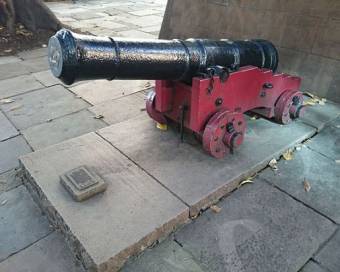 
After the runaways got clear of the land they gave the master and one seaman a boat belonging to the schooner Governor Hunter, then riding at anchor in Hunters River within hail of the sloop when taken. The master and sailor reached the settlement the 8th about 7am. The master's report of the sloop is that she was in a very unfit state for sea being leaky, not quarter ballast, no fuel and little water.

In hopes necessity would oblige them to put in on the north side, I dispatched a party along that coast. They returned on the 12th but with no intelligence but the wreck of the boat. There is little doubt they must have all perished, the weather being very bad.

One of the soldiers unable to proceed on his return got speared and stripped by the natives of his cloaths, arms and ammunition. From circumstances I have since learnt I have reason to suspect that the Camp Overseer Thomas Lawson was accessary to their escape but have not yet been able to get sufficient information to convict him. I have dismissed him from the situation and turned him into the working gang for even allowing him to be innocent of their design he should have gone with them himself agreeable to my directions......Thomas Thompson, Commandant. [2]


The Sydney Gazette reported the incident......


Information is received from Newcastle of the piratical capture of the Speedwell, a schooner of about 21 tons burthen, Patten master, on the night of the 7th instant, by four desperadoes, whose names are Burridge, Styles, Scarr and Pearce.

The report states that the night was a continual heavy rain; and that about midnight the master was awakened by one of the ruffians, who requested in the name of the Commandant the loan of a grapnel, for the purpose of mooring a boat off; which the master went down the hold to procure, and was there secured after a struggle, in the course of which he received several blows on the head. The wife of the master being on board, and a seaman, who was asleep in the forecastle, they were both secured, and the wind favouring the audacious attack, the vessel was taken out of the harbour without the slightest alarm reaching the shore nor was she discerned till at the very mouth of the river; when the people on board the Governor Hunter, which had been that day launched from the beach she had sometime before grounded on, saw her beating about, and concluded she had got adrift, and was endeavouring to work in ; so that as it continued to rain very hard, no further notice was taken of her.

The Governor Hunter's boat had been missed the same night from along side, and it proved afterwards that she had been stolen by these depredators, and was employed in the capture, but given unto the three persons whom they made prisoners, to return with it to the settlement. On board the vessel was a month's provisions, and about sixty gallons of water; which may enable them for a short time to subsist, but they have no boat with them, and consequently can procure no supply of necessaries without the utmost risque to the vessel and their own lives; and thus as has been the case with every former attempt of the kind, may be counted on as the certain destruction of those who have been rash enough to engage in it. [1]

Joseph Burridge Tried at Kent in March 1813. Arrived per General Hewitt in 1814

Herbert Stiles/Styles Tried at Calcutta for Piracy on 4 December 1809. Arrived on the Brig Eagle 17 February 1811