The Broxbornebury was built at Gravesend, River Thames in 1812.[1]

She was the next convict ship to leave England for New South Wales with female prisoners after the departure of the Wanstead in August 1813.

The Surry with male prisoners and the Broxbornebury with females both departed England 22 February 1814.

The Lloyds Marine List of 31st March reported that the Broxbornebury on her voyage from London to New South Wales; and the Cape Packet, Agnew, from London to the Isles of Frances, and Cape of Good Hope, put into Corunna, on 3rd, having separated from the fleet which sailed from Portsmouth 21st ult., under convoy of His Majesty's ship Dannemark, in a very heavy gale of wind. The Cape Packet had received so much damage that it was supposed she would be obliged to discharge.

Jeffery Bent, Barrister at Law, who was appointed Chief Justice arrived as passenger. He was a brother of Ellis Bent, Judge-advocate.

Jeffery Hart Bent kept a Journal on the voyage out. (See Journal of a voyage : performed on board the ship Broxbornebury from England to New South Wales / by J.H. Bent 1814 ; transcribed by Suzanne and Waldemar Lotocki)

The Broxbornebury arrived in Port Jackson on 28 July 1814 the same day the Surry arrived with fever raging on board. They had fallen in with the Surry again off Shoal Haven and on speaking her, learnt that from the relaxed state of the crew, and illness of the surviving officers, her safe conduct into Port Jackson was despaired of, unless assisted from the other ship with some person capable of navigating her in; for which service a seaman capable of the task generously volunteered his service and brought her in. Thomas Raine, a junior officer was the only surviving officer left on the Surry. 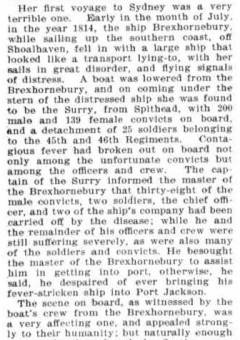 Departure of the Broxbornebury from Port Jackson

The Broxbornebury departed Port Jackson bound for Batavia 16th November 1814. She was condemned in 1843.

1. Convicts of the Broxbornebury identified in the Hunter Valley region:

2. In 11th November 1812 the Emu, commanded by Lieutenant Alexander Bissett R.N., with 49 female convicts on board sailed from England for Hobart. The Emu was captured by the American privateer Holkar. On 17th January 1813 Bissett and the female convicts were landed on the island of St. Vincent, Cape Verde Islands where they remained for twelve months before being returned to England. There were forty nine female prisoners on the Broxbornebury who had been tried in 1812 or earlier and most of these were probably those who had previously been sent on the Emu.

4. Journey to a new life : the story of the ships Emu in 1812 and Broxbornebury in 1814, including crew, female convicts and free passengers on board / written by Elizabeth Hook.

5. The Broxbornebury was one of three convict ships bringing female prisoners to New South Wales in 1814, the others being the Wanstead and the Catherine. A total of 322 female prisoners arrived in the colony in 1814.

9. Mr. Powell and family, free passengers, were drowned six months after arrival.....About three o'clock last Sunday afternoon, a sailing boat containing 6 or 7 persons , including the owner, whose name was Barnes, left that part of Cockle Bay which is about midway between Mr. Blaxcell's salt pan wharf and the market wharf, on a pleasure excursion, but was unfortunately overtaken by a squall, and upset at the entrance of the channel leading to Pyrmont, when all on board perished, though every possible exertion had been made by those who chanced to be spectators of the tragical event, to render them assistance. Mr. Powell, a shoemaker, with his wife and two children, lately from England by the Broxbornebury as a settler, were all of the unfortunate party, of whom not one survives to tell the grievous tale. Mrs. Powell and one of the two children, whose bodies had never sunk, were found floating within 15 or 20 minutes from the upsetting of the boat - but past the possibility of being restored to animation - Sydney Gazette 28 January 1815.

10. Mary Lawrence (nee Pete) from Dorset was sentenced to 14 years transportation. In Sydney she married George Davis (arr. Earl Spencer in 1813) and together they built a home and family at Gounyan Creek near Yass. It is unusual to see a portrait of a convict woman transported at such an early time. The Read her story here 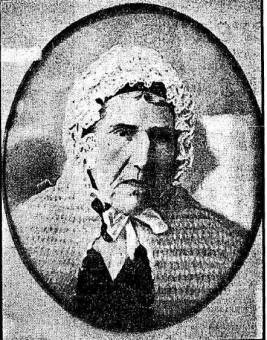