The Competitor was built at Whitby in 1813. She was the next convict ship to leave England for New South Wales after the departure of the Countess of Harcourt in May 1828. The previous female convict ship leaving England was Louisa in August 1827.

The women had been forwarded to London from county prisons or held in Newgate prior to embarking on the Competitor.

Among them were 47 year old Elizabeth Fisher and her daughter Anne age 13. The case was reported in the newspapers - Eliza Young, aged fourteen, convicted on 4 indictments of stealing different articles of linen drapery, from the shops of Mr. Hutchinson and Mr. Smith at Gloucester and was sentenced to two separate punishments of seven years transportation each; also similarly sentenced - Elizabeth Fisher, Anne Fisher age 13 and Mary Woodcock for receiving the property stolen by Eliza Young knowing it to have been so obtained.

Thomas Hunter kept a Medical Journal from 31st May to 20 October 1828.

He recorded that the prisoners were generally healthy - there were no attacks of dysentery, scurvy or fevers of an infectious kind. The illness of Jane Burt was the only case of importance; she suffered 'the most determined visceral inflammation' the surgeon had ever witnessed.

From the Cape of Good Hope until the coast of New Holland hard gales constantly kept the Competitor shipping large quantities of water, making the lower deck very uncomfortable. Fires were kept burning constantly and the ventilating stove used. The surgeon found 'the long range of funnel' supplied to prison ships extremely useful and moved it from one side to another of the prison, on alternate days, to distribute the warmth. The women found the bad weather hard to bear. Elizabeth Cooper aged 36 suffered with sea sickness between July and October. She was reported to be dying and when Thomas Hunter examined her he found her 'countenance expressive of the utmost debility, her skin cold and moist, hardly any pulsation at the wrist... great oppression about the praecordia, difficulty of breathing and her extremities were cold'.

There were accidents as well. Five year old Thomas Hayley, son of Mary Hayley was seriously injured when he fell ten feet down the main hatchway and hit his head on a water cask and Harriet Williams, aged 24 was lucky to survive after being struck by the end of a spar being used for hauling in salt water while she was seated on the leeside of the quarter deck.

Those women mentioned in the surgeon's journal included:

Sophia Shepperd, aged 27, convict; pseudo syphilis. Put on sick list, 10 June 1828, at Woolwich. On arrival at Sydney she was able to go out to service in a gentleman's family.

Jane Burt, aged 24, convict; disease or hurt, hepatitis. Put on sick list, 23 September 1828, at sea. Discharged to the hospital at Sydney, 14 October 1828. Had been cured of a previous attack on 27 August 1828 but had not been sufficiently careful during the very severe weather the ship experienced and caught cold. On 25 September 1828 she was accused of theft by one of the other prisoners and her symptoms became worse.[3]

The Competitor arrived in Port Jackson on 10 October 1828.

On Saturday 11th October the Colonial Secretary Alexander McLeay boarded the vessel to muster the women prior to landing.

The indents record the name, age, education, religion, marital status, family, native place, trade or calling, when and where tried, sentence, former convictions, how disposed of (assignment) and physical description. The indents of the Competitor contain more information than most including occasional details of husbands and colonial circumstances. The descriptions of some of the women are also more informative than many indents. As well as the usual complexion and colour of eyes, hair etc there are also extra notes, and so it is revealed that

On arrival the women were assigned to various settlers and townsfolk whose names are recorded in the indents but not their residence.

Nineteen women, probably some of those children were sent to the Female Factory at Parramatta.

Below are the assignment details of some of the women:

Abby Desmond was assigned to Arnold Fisk at Newcastle

The Competitor was reported to have sailed for Manilla on 10th November 1828.

Convicts and passengers of the Competitor identified in the Hunter Valley -


2). The Competitor was one of three convict ships bringing female prisoners to New South Wales in 1828, the others being the Elizabeth and the City of Edinburgh. A total of 471 female convicts arrived in the colony in the year 1828.

3). Report from the Select Committee on Transportation showing the number of females sent from the convict ship Competitor to the Parramatta Female Factory in 1828: 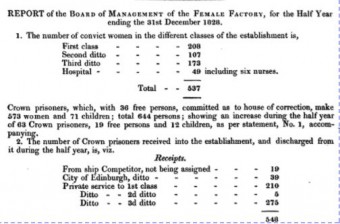 - Report from the Select Committee on Transportation

[3] National Archives - Reference: ADM 101/17/8 Description: Medical and surgical journal of the female convict ship Competitor for 31May to 20 October 1828 by Thomas Hunter, surgeon, during which time the said ship was employed on a voyage from England to New South Wales.