Prisoners of the Mangles came from counties throughout Ireland. They were transferred to Dublin to await transportation. 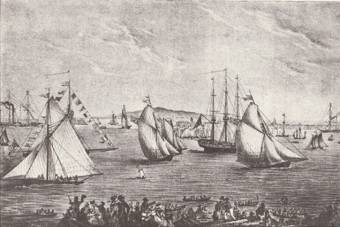 The Mangles departed from Dublin on 23 February 1828.

Harman Cochrane was employed as Surgeon-Superintendent. He was also previously employed as surgeon on the convict ships Mary in 1823 Mariner in 1825 and the Boyne in 1826.

The Mangles arrived in Port Jackson on 2nd June 1828, one of the shortest runs made at the time.

Inclemency of Sydney weather did not prevent the Colonial Secretary Alexander McLeay boarding the Mangles on Thursday 5th June. Despite the rain he carried out his duties, mustering the men prior to their dis-embarkation and distribution.

The indents include name, age, education, religion, marital status, family, native place, trade, offence, when and where tried, physical description and where assigned on arrival.

The oldest men were John Cannovan aged 58; Patrick Whelan aged 60 and John McKenna aged 63. Francis Biggs, a Commissioned Officer in the Army who was sent for manslaughter was 54 years of age.. According to the indents, he was run over by a cab in Sydney on 18 March 1851.

On Friday 13th June the prisoners were landed and escorted to the Prisoners' Barracks in Hyde Park where they were inspected by Governor Ralph Darling and afterwards distributed throughout the Colony to districts including Wilberforce, Prospect, Bathurst, Minto, Windsor, Sydney, Parramatta, Argyle, Wallis Plains, Patterson Plains and the Hunter Valley.

Thomas Tracey, aged 40, a physician from Kings County was the only convict from the Mangles sent to Wellington Valley. He died in Sydney Hospital 18 September 1828.

Convicts of the Mangles identified in the Hunter Valley -

4. An account of the trial of Thomas Tracy in the Freemans Journal.....Recorder's Court - From the sitting of the Court up to the hour of two o'clock the Records and Jury were engaged with petty cases, not worthy of publication. After which, Thomas Tracy was put to the Bar, charged upon an indictment that he feloniously stole three yards of linen cloth the property of Henry Tuthill. The prisoner, on being called upon to plead, in a faltering and low voice, said that he was guilty; but being subsequently required to withdraw his plea by persons near him, he pleaded not guilty. On being asked if he was ready for his trial, he replied in the negative, and requested, as well as we were able to collect, a week's time. The Recorder intimated to him, that unless legal cause were shown by affidavit this day (Saturday), the trial should be forthwith proceeded on. We understood from professional gentlemen convenient to us, that since the occurrence of this lamentable affair, the appearance of the prisoner had become careworn and haggard....Freemans Journal Saturday November 17 1827.

Recorder's Court - On Friday, Doctor Thomas Tracey, M.D. pleaded Not Guilty to the indictment for stealing in the shop of Mr. Tuthill. At the sitting of the Court on Saturday. Mr. Hamilton said, he was desired by the prisoner to apply to the court, to withdraw the plea of Not Guilty, which he had put in on Saturday. After some observations from the Records, The prisoner was again arraigned. The indictment was read to him. In it, he stood charged for stealing three yards of linen, the property of Henry Tuthill, of Dame street, and to which the prisoner pleaded guilty. The Recorder then proceeded to give Judgment and sentenced the prisoner to seven years transportation. - Freemans Journal Monday November 19 1827

Anne Walker a country servant age 26 and her husband Thomas Daley a farm servant age 24 were convicted at Monaghan on 30 July 1827 of stealing hats. Thomas Daley arrived on the Mangles in 1828 and was assigned to Joseph Brooks Weller.

Ann Walker arrived on the Edward in 1829. Anne's Ticket of Leave 31/757 issued 29 September 1831 states permission for her to remain in the district of Paterson's Plains.

Their daughter Sarah Daley was born in Maitland in 1831.