Sir James Dowling was born in London in 25 November 1787. He married Maria Sheen in 1814. On his appointment as Judge in the Colony he sailed to Australia on the Hooghley arriving in February 1828. Accompanying him were his wife Maria and children Maria age 13; Vincent T.W. 12; Ann, 10; James Sheen, 9; Elisa 7; Susannah 5; and younger relative Willoughby James Dowling age 18.

James Grant was granted 2560 acres of land in 1828 which he took up on the Williams river - located middle top on the map below.... 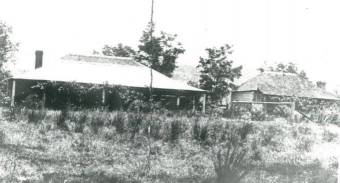 Justice Dowling held the first Circuit Court in Maitland in 1829.....The Court of Criminal Circuit has commenced proceedings under the guidance of Mr. Justice Dowling, who put up at Campbelltown on Monday, with a smart equipage, High Sheriff, Crown Officers, Pursuivants, and so forth. Campbelltown has been pitched upon by the Court Supreme for the first assize of this first Court of the kind in the Colony. Windsor follows next, and the township of Maitland, in the district of Wallis' Plains, where court day is to come on the 17th August 1829. [1]

The Circuit Court was to be held in Muir's newly opened Union Inn which boasted a distinction of apartments, excellent wines and spirits and promised prompt and obliging attendance. [2]

James Dowling succeeded Sir Francis Forbes in 1837 as Chief Justice of New South Wales. He was knighted in 1838. He has been described as industrious, meticulous, urbane, mild mannered and indefatigable.

Sir James Dowling died in 1844. One hundred and five carriages stretched from St. James Church to Campbell St in the Funeral procession of Sir James Dowling. Pall Bearers were Sir Maurice O'Connell, Mr. Riddell, Dr. Dawson, Mr. E.D. Thomson, Dr. Bland, Mr. Norton. The Bells of St. James Church and the Roman Catholic Cathedral were tolled during the morning and a vast concourse of people were in attendance on the whole line of the procession.

His Obituary from The Sydney Dispatch {Extract}:

We feel deep sorrow to have to announce the death of Sir James Dowling, chief Justice, who expired yesterday about three o'clock in the afternoon. Amongst the various circles of society in this colony, we know of none in which this intelligence will not spread deep gloom and unfeigned regret.

Few, very few men in his exalted situation, with the severe, responsible and arduous duties which he had to perform, have so deported themselves as to ensure that almost unanimous feeling of respect and esteem which pervaded almost every mind towards our lamented Chief Justice. As a judge, learned, patient, and impartial - impressed with a deep sense of the solemnity and responsibility of the duty entrusted to him - acting ever with that strictness of integrity, that unbiased and unwarped judgment, which gave to all his decisions the sanction of an implicit trust in the justice of the man who pronounced them. As a man, how many, how very many in this colony will have to lament the death of sir James Dowling. How many a vacant place will appear in these circles both of social intercourse, and benevolent and charitable communion, in which it was his lot to move. Men perhaps of higher talent, of more glittering abilities there may be in this colony, but none, we will venture to say, who joined to a deep sense of the duties he had to perform - the industry, the capacity to act up to the requirements which that sense imposed upon him.... Long and faithfully did he fulfil the trusts reposed in him; long and faithfully has he served his Sovereign, and the people among whom his lot has been cast.

In the discharge of those duties - alas that it should be so - domestic ties, the clinging to life, the careful sustenance of health have been alike disregarded. Gradually under the pressure of that burden Sir James Dowling gave way. The energies which had been so long so usefully exerted, performed their functions to the last.

Ours alas, is the loss, his the relief. 'After life's fitful fever, he sleeps well,' but amidst the annals of these earlier days in the history of Australia, we prophecy the pen of the historian will still assign one page of respectful and affectionate remembrance to the name of Sir James Dowling.'


From the Gentleman's Magazine:

Sir James Dowling. Sept. 27. At Darlinghurst, Sydney. New South Wales, in his 58th year, the Hon. Sir James Dowling, Knt., Chief Justice of that colony. He was born in Ireland, and was second son of Vincent Dowling, esq. of the Queen's County, afterwards of Kentish Town, Middlesex, who was many years a reporter to the public press in Dublin, previous to the Union, and subsequent to that event was attached to the London press.

Adopting the legal profession. Sir James became a student of the Middle Temple, and was called to the bar in 1815. He practised on the Home Circuit and at the Middlesex Sessions many years, and was generally looked upon as a leading member of the Common Law Bar. His name is, however, perhaps better known to the public as the original editor and establisher of the New Term Reports, in connection with Mr. Archer Ryland, Q. C. The value and utility of these reports, which are a second series of the Cases in the Court of Queen's Bench, is sufficiently attested by the fact of their having been regularly continued from their first establishment in 1822. The services of these gentlemen in their capacity of reporters have been, indeed, universally acknowledged by the profession, though the honour and emolument acquired by them perhaps little repaid the anxiety and labour attendant upon the undertaking in which they embarked. In addition to the regular Reports of the Queen's Bench, edited by Messrs. Dowling and Ryland, which are in nine volumes, they published also Reports of Cases exclusively relating to the duty and office of Magistrates in 4 vols. 8vo.

Sir James Dowling was appointed to the office of Puisne Judge in New South Wales in June 1827, and, on the retirement of Sir Francis Forbes in August 1837, he was elevated to the Chief Justiceship, on which occasion he had the honour of knighthood conferred upon him. Sir James Dowling had been suffering from ill health for some time past, and bad just obtained leave of absence for two years to enable him to return to England in the hope that a change of climate might re-establish it. He had taken his passage with Lady Dowling, and every preparation for his departure had been made, when be was seized by a severe relapse of the attack to which he was subjected, and which carried him off in a very few days. His loss will be deeply and universally felt by all the inhabitants of the colony, by whom he was sincerely respected, not only on account of his high talents and impartiality as a Judge, but for his unwearied benevolence and ready liberality to every institution calculated to promote the interest or happiness of the colony. Shortly previous to his death, the Legislative Assembly, impressed with the value of his past services, voted him the full amount of his salary, 2000/. a year during his contemplated absence in England, although it had been always customary on such occasions to reduce the stipend one half. Farewell addresses, moreover, of the most flattering description bad been presented to him by the Corporation and almost every public institution in Sydney, while the Bar not only joined in the universal expression of sympathy and gratitude evinced by all, but presented to him a valuable piece of plate as a memorial of the high esteem they entertained for him, and the regret they felt at the cause of his departure. His duties as Chief Justice had been more than ordinarily laborious of late, having been delivered of the assistance of his former colleague, Mr. Justice Burton, who had been removed to Madras, and the pressure of his judicial functions at length completely broke down a constitution already impaired by his constant and unwearied application in the discharge of his office.

Sir James married first, in 1814, a daughter of T. W. Sheen, esq. of Kentish Town, and secondly a daughter of John Blaxland, esq. of Newington, N. S. Wales, whom he has left his widow, together with two sons and two daughters, to deplore his irreparable loss. His second son, Mr. James Dowling, has been recently called to the Bar, and was on the eve of his departure for the colony. The Governor of New South Wales attended the funeral of the deceased Chief Justice, with all officers of the Civil Government. The deceased gentleman was younger brother of Mr. Sergt. Dowling, and there are other members of the same family whose names are well known to the legal profession. Sir James's eldest brother is at present editor and in part proprietor of the well-known sporting journal 'Bell's Life in London.' Mr. A. Beckett, the Solicitor-General of N. S. Wales, has been temporarily appointed as Judge of the Supreme Court, and Mr. W. Montague Manning Solicitor-General. The latter gentleman is a nephew of Mr. Sergeant Manning, and has for the last seven years filled the situation of Chairman of Quarter Sessions for the colony. Both of the appointments, there is reason to believe, will receive the confirmation of Government.

The pension due to his wife on his death was not immediately forthcoming and in 1848 Lady Dowling, still dealing with financial issues, was forced to apply to Earl Grey for the amount of her pension to be paid from the date of his death to the date the pension was granted.

The Canningalla estate became the seat of Vincent F.W. Dowling after the death of his father Sir James Dowling.

2). The death is recorded of Mr. Vincent W.F. Dowling at his residence at Mosman, North Sydney. He was the eldest son of the late Sir James Dowling, the second Chief Justice of the colony, and elder brother of the late Judge James Sheen Dowling and Lady Hodgson. He was born on 26th November, 1816 at St. Margarets Westminster, London. He came to this colony in 1828 in the barque Hooghly and had resided in the State ever since For many years he engaged in legal pursuits at Dungog, on a property known as Canningalla, granted by the Crown to his late father. In later years he resided at Mosman. His wife and four sons and four daughter survive him - Maitland Weekly Mercury 3 January 1903