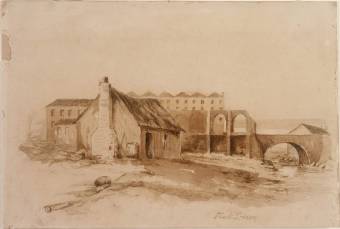 In 1789 drought threatened the colony, and the small freshwater stream that ran into Sydney Cove proved an inadequate source of water. To overcome this, holding tanks were later cut into the sandstone banks to provide storage for the water. This stream became known as the Tank Stream.

Officers of the Marines invited to dine at the Governor's table

Death of Captain John Shea of the Marines who died of consumption after a long illness.

Six marines executed in Sydney for stealing food - James Baker, James Brown, Richard Dukes, Thomas Jones, Luke Haynes and Richard Askew. - An awful and terrible example of justice took place towards the close of this month, which I record with regret, but which it would be disingenuous to suppress. - Six marines, the flower of our battalion, were hanged by the public executioner, on the sentence of a criminal court, composed entirely of their own officers, for having at various times robbed the public stores of flour, meat, spirits, tobacco, and many other articles. - Extract from 'A Complete Account of the Settlement at Port Jackson: In New South Wales' ... By Watkin Tench

Outbreak of Smallpox amongst the aborigines at Port Jackson. In April and May, 1789, an extraordinary calamity was observed among the natives. In all the coves and inlets of the harbour of Port Jackson, were found dead Indians, whose bodies were covered with pustules similar to those occasioned by the small pox; and the disease being ascertained to exist in several others, the sick were, by the directions of the governor, treated with all possible attention. To the gentlemen of the hospital the malady seemed inexplicable; and Captain Tench has given the following note on the subject: No solution of this difficulty had been given when I left the country, in December, 1791. I can, therefore, only propose queries for the ingenuity of others to exercise itself upon. Is it a disease indigenous to the country? Did the French ships under M.de Perouse introduce it? Let it be remembered, that they had now been departed more than a year; and we had never heard of its existence on board of them. Had it travelled across the continent from its western shore where Dampier and other European voyagers had formerly landed. - Was it introduced by Mr. Cook? Did we give it birth here? No person among us had been afflicted with the disorder since we had quitted the Cape of Good Hope, seventeen months before. It is true, that our surgeons had brought out variolous matter in bottles; but to infer that it was produced from this cause were a supposition so wild as to be unworthy of consideration. Tench's Complete Account of Port Jackson in The English Review

Mutiny on the Bounty .

Death of Arabanoo from small pox

First Police Force in the colony - known as The Nightwatch.

First Launching of a vessel in Sydney - The launch that was begun in May by the carpenter of the Supply being completed, was put into the water on the 5th October. From the quantity of wood used in her construction, she appeared to be a mere bed of timber; and, when launched, was named by the convicts, with a felicity that is sometimes visible in the allusions of the lower order of people, The Rose Hill Packet; but she was afterwards better known as The Lump - An Account of the English Colony in New South Wales

Lieutenant William Dawes led a party into the mountains across the Nepean River, penetrating 15 miles (24 km) in 3 days - An Account of the English Colony in New South Wales From Its First Settlement in January 1788, to August 1801 - By David Collins

The Store ship Guardian, Captain Riou, laden with stores and carrying 25 convicts and a crew of 123 struck an iceberg 400 leagues from the Cape of Good Hope.