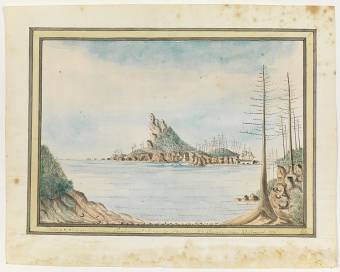 
Governor Philip introduced a land grants scheme; and a dry store on the east side of Sydney Cove was completed.

Departure of the Supply for Norfolk Island with more convicts. A party left on Lord Howe Island to 'turn turtles'.

Departure from England of the Second Fleet

Sirius wrecked at Sydney Cove off Norfolk Island. Capt. Hunter and the crew landed safely. Lieut-Gov. Ross' correspondence to Governor Philip March 1790 re the loss of the Sirius at Norfolk Island

News of the wreck of the Sirius reached Sydney by the Supply. Famine threatened the colony necessitating a reduction of rations. Governor Philip requested permission to return to England because of his failing health.

Departure of the Supply for Batavia to obtain supplies

Arrival of the Lady Juliana with provisions, 221 female convicts and news of the outbreak of the French Revolution.

Arrival of storeship Justinian in Sydney Cove. - From the History of Sydney Hospital by Dr. J. Frederick Watson on the centenary of the laying of the foundation stone of the hospital.....By the Justinian, a portable hospital was brought out, but in addition to this it was necessary to pitch between 80 and 100 tents about the hospital, each to contain four patients. In these tents there were no comforts, except a bed of grass for each Invalid, and one blanket for four occupants which was naturally seized by the strongest, and utilised for himself alone on the cold winter nights. To attend on these sick people were the five surgeons and a number of convicts as nurses. - Sydney Morning Herald 28 October 1911.

Arrival of the Second Fleet - Surprise, Neptune and Scarborough with the first detachment of New South Wales Corps sent to replace the Marines. Darcy Wentworth assistant surgeon. The Second Fleet brought provisions but food shortages were exacerbated because of the number of convicts on board.

Two marines and a midshipman drowned in Sydney Harbour when their boat was destroyed by a whale.

In this month one convict was executed for sheep-stealing.......The preservation of stock was an object of so much consequence to the colony, that it had become indispensably necessary to protect it by every means in their power. Had any lenity been extended to this offender, it might have been the cause of many depredations being made upon the stock, which it was hoped his punishment would prevent. The female convicts were now employed in making the slops for the men, which had been sent out unmade. Each woman that could work at her needle had materials for two shirts given her at a time; and, while so employed, was not to be taken for any other labour. The storehouse which was begun in July was finished during this month. Its dimensions were, one hundred feet by twenty-two. - An Account of the English Colony in New South Wales.

Governor Phillip speared in the shoulder by aborigine Willemering.

Return of the Supply with provisions