He qualified as surgeon's second mate in the Navy in February 1778 and was gazetted naval surgeon in March 1780, serving for two years in the Pilote. In November 1786, aged 30, he joined the Sirius, sailing in her next year in the First Fleet to New South Wales.[2]

John White served as Surgeon-General on the First Fleet. George Worgan was one of eight surgeons who served under him, the others being - Dennis Considen, Thomas Arndell, William Balmain, John Turnpenny Altree, Arthur Bowes Smyth, James Callam and Thomas Jamison.

George Worgan being musically inclined took with him to New South Wales his piano. Before his departure for England in the Waaksamheyd in 1791, he gifted the piano to Mrs Elizabeth Macarthur. 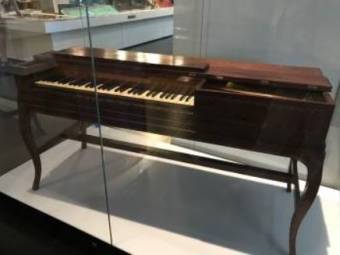 The piano eventually became a part of the Stewart Symonds Collection, which was donated to Edith Cowan University in 2016. The piano, shown above, was on loan to the WA Maritime Museum until 2017.


George Worgan kept a journal which is an account of the first five months of settlement. It was attached to a letter written to his brother Richard Worgan. He describes in detail the natives they encountered and troubles with convicts. Being a musician himself, he also describes official celebrations when music was played such as that of the King's Birthday when the Band played....... At Sunrise the British Flags were displayed on Board the Ships, and on the Shore. The Sirius, and Supply fired 21 Guns each; this Ceremony they repeated at 1 O'Clock, and at Sunset. At 12 O'Clock the Battalion was drawn up before the Governor's House, where, they fired three Vollies of Musketry, the First part of God Save the King being played by the Band between each Volley. [1]

Unfortunately there is no other mention of music in the journal although he does refer to singing the evening away while on a bush excursion.......

Mon. 9th. Two of Captain Hunter's Servants having gone on Shore Yesterday Noon, to take a Walk in the Woods, and not being yet returned, we were apprehensive that they had missed their Way, or that some Accident had happened to them, therefore Boats were sent up and down the Harbour close along the Shore with Directions to the Officers of them, to Fire a Musket now and then. I having a Mind for a Ramble, offered, with three other Gentlemen, as a Volunteer to go into the Woods, in search of Them, therefore arming Ourselves, and equipping our Snapsacks (?Knapsacks), we went on Shore, and directing our Course N.W. Inland We walked till 3 O'Clock in the Afternoon, hollowing, and firing our Guns every half hour, but not being able to meet with them, we determined upon staying out all Night, accordingly We laid down our Bread an Cheese Wallets, made up a Wig-wam of green Boughs, cut some dry Ferns for a Bed, lit two or three rousing Fires near our Hut, and set down to Dinner. We sung the Evening away, and about 9 O'Clock retired to Rest, taking it by turns to keep watch, and supply the Fires with Fuel. [1]

George Worgan joined several other expeditions to the Hawkesbury River and Broken Bay and attended to medical duties as required such as recommending that Lieut. William Collins and Lieut. Maxwell be returned to England because of incapacitating illness. He signed the document G.B. Worgan, Surgeon of the Sirius, General Hospital, Sydney Cove. [3]

George Worgan died of apoplexy at Liskeard on 4 March 1838.

4). John Turnpenny Altree also returned to England on the Waaksamheyd.

5). General View of the Agriculture of the County of Cornwall - G.B. Worgan

Magnify the map above by scrolling then click on the ship icons to read accounts from First Fleet Journals. Each of the eleven ships is represented by a different colour. Enlarge the map using the icon on the top right. Select here to find out more about this map