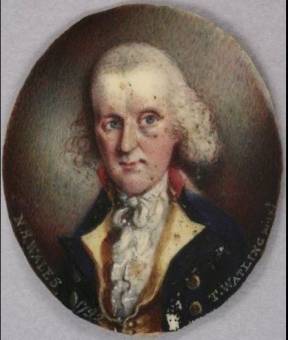 John White was a naval surgeon. Having received his diploma of the Company of Surgeons on 2 August 1781, his naval service took him as far as the West Indies and India over the next five years.

He was appointed chief surgeon to the First Fleet in 1786 after a recommendation by Sir A.S. Hamond....

Sir A.S. Hamond to Under Secretary Nepean,
Chatham, 16th October 1786
Dear Sir,
Mr. White, the surgeon of the Irresistible, is a candidate for Botany Bay. He is a young man of much credit in his profession, and of that sort of disposition and temper that render him a very proper person for such an establishment. If no surgeon is yet appointed, and you will do me the favour to recommend him to Lord Sydney, I shall think myself much obliged to you, and shall consider myself bound to Government for his good behaviour, I am etc., A.S. Hamond. [1]

George the Third, etc. to our trusty and well beloved John White greeting: We do, by these presents, constitute and appoint you to be Surgeon to the settlement within our territory called New South Wales, You are, therefore, carefully and diligently to discharge the duty of surgeon by doing and performing all and all manner of things thereunto belonging ; and you are to observe and follow such orders and directions from time to time as you shall receive from our Governor of our said territory for the time being, or any other your superior officer, according to the rules and discipline of ward. Given at our Court at St. James's the twenty fourth day of October 1786, in the twenty sixth year of our reign, By his Majesty' command, Sydney. [1]

Magnify the map above by scrolling then click on the ship icons to read accounts from First Fleet Journals. Each of the eleven ships is represented by a different colour. Enlarge the map using the icon on the top right. Select here to find out more about this map

On arrival in the colony many convicts were suffering from illnesses arising from scurvy and other diseases, although there was no small pox yet encountered. Soon a 'tent' hospital was established in what would later become George Street north. This was replaced by a more permanent building.

From the History of Sydney Hospital by Dr. J. Frederick Watson on the centenary of the laying of the foundation stone of the hospital......In the beginning of February, 1788, the erection of the first hospital was commenced on the west side of Sydney Cove, near what are now known as the Commissariat Stores, George street North; it was completed by twelve convict carpenters and sixteen hired men from the ships. An soon as it was finished it was filled, and the overflow occupied tents around it. Some of the drugs were found to have perished during the prolonged voyage, and others were of inferior quality; but it is interesting to read that the native sarsaparilla proved to be powerfully anti-scorbutic, and an infusion of wild myrtle astringent in dysentery, the honour of these discoveries being claimed by Dennis Considen. [4]

Governor Philip reported to Lord Sydney in correspondence dated 9 July 1788 that the hospital was a building that would stand for some years. It was clear of the town and the situation healthy. [5] A portable hospital also arrived with the Second Fleet in 1790. John White was a keen amateur naturalist and took an intense interest in the unique flora and fauna of his new surroundings. He sent many specimens and drawings to England. When Thomas Watling, convict and artist, arrived in the colony in October 1792 on the Royal Admiral he was assigned to John White and in the next two years made many drawings for him. [3]

John White kept a journal on the voyage out, which was published in London in 1790, as Journal of a Voyage to New South Wales with Sixty-five Plates of Nondescript Animals, Birds, Lizards, Serpents, curious Cones of Trees and other Natural Productions

The above Journal was written while his enthusiasm for this unique country was still at its height. Two years later when the correspondence below was penned, his passion and excitement had waned......

In 1791 the following letter written by John White was published in the Belfast Newsletter. The letter was written in Sydney on 17 April 1790 and details of the desperate plight of the colony at that time emerge from his writings. He couldn't have foreseen it as he lamented their dire situation, but worse was yet to come as just three three months later the Second Fleet sailed into Sydney Cove with over seven hundred and fifty convicts many of whom were sick and dying....

His Majesty's ship Sirius, and Supply tender, sailed from hence the 6th March last, with the Lieutenant governor, half the marines, and about 200 convicts for Norfolk Island and landed them safe the 16th. This division of our numbers the Governor thought necessary, on account of the low state of our provisions. The ship stood off and on until the 19th before an opportunity of landing the provisions and stores offered; then the Sirius stood in as close as possible to hasten and facilitate getting the things thought a heavy surf, which continually rolls in on the beach, but by a current, or some other unforeseen cause, she was driven on a reef of hidden rocks and irrecoverably lost. The ship's bow is in a position which will probably make her hold together until every thing is got ashore, where all the officers and men are safe, with a greater store of provisions than we have here.

Had the Sirius arrived safe, she was immediately to be sent to China for some relief for us, and on her dispatch our all depended; but, alas! that hope is no more, and a new scene of distress and misery opens to our view.

When the Supply arrived (from Norfolk Island) with the melancholy tidings, the Governor called all the officers together to consult and deliberate on what was left to be done in our present distracted and deplorable situation. He laid before us the state of the provision store, which contained only four months flour, and three of pork, at half allowance, which has been our portion for some time past, every other species of provision being long since expended. We therefore determined on the necessity of reducing our half allowance of those two articles to such a proportion as will enable us to drag out a miserable existence for seven months.

Should we have no arrivals in that time, the game will be up with us, for all the grain of every kind which we have been able to rise in two years and three months, would not support us three weeks, which is a very strong instance of the ingratitude and extreme poverty of the soil, and country at Large: though great exertions have been made.

Much cannot now be done; limited in food, and reduced as the people are, who have not had one ounce of fresh animal food since first in the country; a country and place so forbidden and so hateful, as only to merit execrations and curses; for it has been a source of expense to the mother country, and of evil and misfortune to us, without there ever being the smallest likelihood of its repaying or recompensing either. From what we have already seen, we may conclude that there is not a single article in the whole country, that in the nature of things could prove of the smallest use or advantage to the mother country or the commercial world.

In the name of Heaven, what has the Ministry been about? Surely they have quite forgotten or neglected us, otherwise they would have sent to see what become of us, and to know how we were likely to succeed. However, they must soon know from the heavy bills which will be presented to them, and the misfortunes and losses which have already happened to us, how necessary it becomes to relinquish a scheme that in the nature of things can never answer. It would be wise by the first steps to withdraw the settlement, at least such as are living or remove them to some other place. This is so much out of the world and tract of commerce that it could never answer. How a business of this kind (the expense of which must be great) could first be thought of without sending to examine the country as was Captain Thompson's errand to the coast of Africa, is to every person here a matter of great surprise.

M. Perouse and Clanard, the French circumnavigators we well as us, have been very much surprised at Mr. Cook's description of Botany Bay. The Supply tender sails tomorrow for Batavia, in hopes the Dutch may be able to send in time to save us. Should any accident happen to her, Lord have mercy upon us! She is a small vessel to perform so long and unexplored a voyage, but we rely much on the abilities and active attention of Lieut. Ball, who commands her.

Lieut. King, Second of the Sirius takes his passage in her to Batavia, and from thence to the Cape of Good Hope (in his way to Europe) where he has orders to charter a ship and send her to us immediately, should no other ships have passed that place in their way here. [2].

John White returned to England on the Daedalus, departing Sydney in December 1794 and arriving in England 1795. He died at Worthing on 20 February 1832 aged 75 and was buried at St Mary's, Broadwater.[3]