Correspondence dated 13 June 1822 from Dr. Edward Trevor, Cove of Cork, to William H. Gregory, Under Secretary of Ireland, Dublin Castle, reported on examination of convicts on board ship Mangles bound for New South Wales, Australia - included is a copy of a letter from surgeon Matthew Anderson to Dr. Trevor, acknowledging receipt of various articles for use of prisoners on voyage which include two Gallons of Ink 190 combs and Twelve Spelling Books -

The only thing we now require is Two copies of some book on Arithmetic which many of our Convicts are desirous of making themselves acquainted with - Chief Secretary's Office Registered Papers.

Matthew Anderson kept a Medical Journal from 23 February - 12 November 1822. The Journal is available at the National Archives and at Ancestry 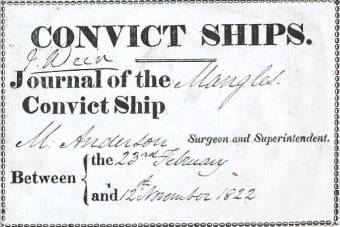 Matthew Anderson was also employed as surgeon on the convict ships Surry in 1819, Mangles in 1820 and the Castle Forbes in 1824.

The Mangles departed Cork on 21st June 1822, called at Rio de Janeiro and was there at the same time as the Caledonia. She departed Rio with a fresh supply of food and vegetables on 1st September 1822.

The Mangles arrived in Port Jackson on 8th November 1822 with 190 prisoners. One man had died of epilepsy on the voyage out.

The detachment of the 3rd regiment (Buffs) that arrived by the Mangles, disembarked on the 8th November and were marched to their quarters in the Barrack square.

The Governor Sir Thomas Brisbane came to Town on Tuesday 12th November. About one o'clock he inspected the prisoners who had been landed in the morning when he found their general appearance portrayed the kind treatment they had experienced during the voyage. His Excellency returned to Parramatta in the afternoon.

1). State of Ireland leading to the Insurrection Act 1822 with information about men who arrived on the Mangles .....by Frank Murray

2). Men of the Mangles 1822 - The Old Limerick Journal by Valerie Thompson

6). A Convict's Letter to his Wife... The following is an authentic copy of a genuine letter sent by a convict to his wife, now a prisoner in Armagh: June the 2nd 1822

Dr. Elonir, I received your last letter, dated the 21st of March, and my reason for not answering it was wating to I would have a full account of what would happen me; but now I can inform you that I am on bord the convict ship in the Cove of Cork, bound for Botaney Bay, which I am not sorry at; all that grieves me is the parting of you, and I would give all ever I seen to have you transported along with me. When your time is up, my advise to you is to not lave the town of Armagh to you will do something that will have you sent after me; you will have my blessing night and morning if you do that - and as Ireland has turned out so bad, and nothing but hunger and hardship in it, you need not be sorry to leave it. Thanks be to God, my mind never was contenter in my life, for my hart if broke with confinement, and I have every promise to do well when I reach the other side. The ship I am in has the best comendations for pashaners, and is kept so clane that is a pleasure to be in her; and the different officers on bord gives every well behaved man heer every indulgence. We are trated very well in regard of alowance, and will be better when we set out to sail. I dont expect to get as much hardship to I gow to Butney Bay as I get coming from Dublin heer. Dont be afraid of not seeing me when you reach the other side; but if you wish to come, mind the ship's name and the time that I was sent away, and the Governor, when you reach the other side, will have you sent to me. There is one hundred and ninety convicts to gow over in this ship, and gentlemen and ladys that is paying there passage, and is in a part of the buy themselves. White to me as fast as you get this, for I think that we will not sail to there will be an answer back; and give my love to Robert Boulter, and send another letter with him to the other side. Give me all you know. No more from your loving husband to death. Direct your letter as follows:
To the care of Mr Sargent, bord of the Mangles, Cove of Cork, for..... .....convict from the County of Tyrone.
My blessing and God's blessing be with you and remain with you to I have the pleasure of seeing you in the other side, I will direct all my letters that I will send to you to the care of James Robinson Monaghan. (Belfast Newsletter 25 June 1822)

7). Major Charles William Wall transferred from the 35th Battalion to the 3rd Battalion......

He became Commandant at Bathurst.....
Lieutenant Colonel Charles William Wall, a Waterloo veteran, succeeded Lieutenant John Fennell as Commandant in September 1826 and held office until 1829. When the land on the west bank of the Macquarie was thrown open to settlement in that year he acquired a large grant of 2560 acres, adjoining General Stewart's Mount Pleasant estate on its 'western boundary, which he named 'Whislow', and upon which he formed an extensive establishment. He was a district magistrate from 1826 to 1836 when he removed to Parramatta - National Advocate 2 September 1936

9). Hunter Valley convicts and passengers arriving on the Mangles in 1822

[2]. National Archives - Reference: ADM 101/47/2 Description: Medical and surgical journal of convict ship Mangles for 23 February to 12 November 1822 by M Anderson, Surgeon, during which time the said ship was employed on a passage to New South Wales