The Hull Packet reported that on the morning of 18th February the following female convicts left York Castle, in order to be delivered on board the Canada transport lying at Woolwich, under orders for Botany Bay -

Free passengers included George Phillips; William Walsh (later appointed Constable in Sydney) and William Walsh junior; Missionary Henry Bicknell who had recently been married to Miss Mary Adams of Adber. He had recently been at Otaheite where he resided for thirteen years, and was returning there with his new bride via Sydney. His nephew George Bicknell also came on the Canada. Ann Well came free, she was the wife of William Wells who arrived on the Fame.

Cargo brought out included 5 cases of hats, 10 trunks of prints and 5 crates of earthenware. [2]

The Canada departed England on 23 March 1810 and sailed via Rio de Janeiro.

They were off the Heads at Sydney on 7th September however could not get into the harbour until at least late on the evening of the 8 September 1810. The date the Canada entered Sydney harbour is officially given as 10th September 1810 (HRA). 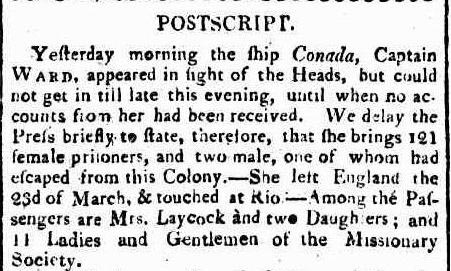 Extract from a Dispatch from Governor Macquarie, to the Earl of Liverpool; dated Sydney, New South Wales, 27th October 1810. .....

The Canada transport brought hither one hundred and twenty-one female convicts, all of whom arrived in good health, and had been well treated by the Commander and Surgeon of that ship during the voyage, one only having died on the passage, who, according to the Surgeon's Report, was in ill health when she was embarked.

The greater part of these Convicts soon after their Arrival were assigned over as Indented Servants for the Space of three years to the different Settlers, who were on the occasion required to execute the Bonds for retaining them for that Period in their respective Services and for their humane and proper Treatment of them. Out of the entire Number of one hundred and twenty-one, there are now only thirty-two remaining undisposed of, and they are Usefully employed in the Government Cloth Manufactory, some time since established at Parramatta. By the Canada I have received the Assignments of Sixty- two female Convicts, transported hither some time ago in the Indispensable, and also of One Hundred and Ninety-Nine Male Convicts, transported in the Ship Anne. The assignment for the females last arrived has not yet reached me.

Provisions and Slops Shipped on board the Canada for the use of the convicts during the voyage and for nine months after their arrival were deposited in the King's Stores. [1]

A Public Notice from the Sydney Gazette in September reveals that the system of assignment didn't always work as it was supposed to: - Several persons having obtained female convicts on Saturday the 15th September from on board the Canada, for whom they were to have entered into Security at this Office for the proper treatment of them, and for the retaining them for three years in their service, and having since neglected to enter into this Security, this is to give Notice that all persons who thus obtained servants are required on or before Saturday next to enter into the usual obligations.

The women who weren't privately assigned were sent to the Cloth Manufactory. On 17th September orders were issued to Lieutenant Durie that accommodation in the Old Store (or Old Granary) be made ready in the best manner for their reception. The Old Granary adjoined the old kiln and was situated in George Street opposite the Government Lumber Yard. It was broken up in 1816.

Crew on the Canada included John Newton, John Thompson, John Gordon, John Ryan, Maurice Connor, John Irwin and William McCall. A reward was offered for their apprehension after they deserted the ship in Sydney in November.

The Canada departed Port Jackson bound for China on 12th November 1810 and returned to Australia with convicts in 1815.

2). Hunter Valley convicts/passengers arriving on the Canada in 1810

3). One of the Canada women, Louisa Smith, was assigned to Sir Henry Browne Hayes at Parramatta. Louisa Smith had been tried at the Old Bailey and sentenced to 7 years transportation for stealing a handkerchief from the premises of Lord Lucan.

4). Sarah Acton arrived on the Canada. She was the wife of Joseph Ogle/Acton who arrived on the Indian in 1810. She was sent to Newcastle penal settlement in 1812. In 1824 she was sentenced to transportation for life for breaking and entering the Rev. George Augustus Middleton's house at or near Newcastle. She was incarcerated in Sydney gaol in 1824 when she petitioned government to be allowed to reside at Port Macquarie where her husband had been sent. Thomas Acton and Mary (Ogle) Acton are both recorded in the 1828 Census residing at Port Macquarie -

17 March 1824
Permission for Sarah Acton to join her husband at Port Macquarie,

I beg your polite attention to the perusal of this letter and fondly crave your assistance by the observance of it. I have been long in imprisonment and have no means of support excepting the allowances given. I have likewise a child to support that it is with the greatest difficulty, I can in any way provided for him.

A Vessel I understand is about proceeding to Port Macquarie but I have received no information relative to myself proceeding thither.

My husband has been at Port Macquarie some time. I have been married to him thirty-two years and it is my ardent wish to join him, this opportunity if you would , Sir, be good enough to order me for embarkation by this draft I must confess your humanity on this occasion, in so doing it, will be ever observed.