The Atlantic was one of eleven vessels of the Third Fleet.

Following is a list of transport vessels provided by Messrs. Camden, Calvert and King contractors for the Commissioners of the Navy, for the conveyance of convicts to New South Wales[5].

The Mary Ann departed England in February 1791 and the rest of the fleet departed in March 1791 and later met with the Queen from Cork at Madeira.

The New South Wales Corps formed the Guard on the vessels of the Third Fleet. On the Atlantic was a sergeant and seventeen privates

Embarking on the Atlantic

In January 1791 the Belfast Newsletter reported on the progress of some of the convicts who were travelling overland to join the vessels of the Third Fleet at Plymouth:

Exeter - On Thursday evening last arrived here, under the care of the gaoler of Bristol, on their way to Plymouth to be shipped for Botany Bay, twenty-two convicts in an open waggon, and two who are stiled Gentlemen Convicts, in a tilted cart.

They had each of them an iron collar, and an iron chain run through a ring in each collar, which fastened them all together - the next morning, at eight o'clock, they set off again in the same manner, and though there was a violent storm of hail, wind and rain, they were singing and hallowing as they passed through the street, with great glee and jollity. Whilst these convicts were passing the streets of Exeter in the manner above mentioned , a woman, struck at their hardened conduct, called out to them 'Ah! you wretched creatures, how can you be so merry in your dreadful situation?' Merry, mistress' replied one of the, 'why bless your funny heart, if you was in our situation you would not only be merry, but actually transported!?

On 17th March at twelve o'clock, two of the transport ships from Portsmouth appeared off the harbour at Plymouth and made a signal to the Atlantic, Salamander and William and Anne vessels lying in Cawsand Bay; on which they weighed anchor, and got under sail immediately. [3]

The evening before they arrived at Port Jackson the Atlantic anchored in a deep bay - Watkin Tench's account - The 'Atlantic', under the direction of Lieutenant Bowen, a naval agent, ran into a harbour between Van Diemen's land, and Port Jackson, in latitude 35 degrees 12 minutes south, longitude 151 degrees east, to which, in honour of Sir John Jervis, Knight of the Bath, Mr. Bowen gave the name of Port Jervis. Here was found good anchoring ground with a fine depth of water, within a harbour about a mile and a quarter broad at its entrance, which afterwards opens into a basin five miles wide and of considerable length. They found no fresh water, but as their want of this article was not urgent, they did not make sufficient researches to pronounce that none existed there. They saw, during the short time they stayed, two kangaroos and many traces of inhabitants. The country at a little distance to the southward of the harbour is hilly, but that contiguous to the sea is flat. On comparing what they had found here afterwards, with the native produce of Port Jackson, they saw no reason to think that they differed in any respect.(6)

The Atlantic anchored at Sydney Cove about midday on 20th August 1791, a voyage of 146 days.

From An Account of the English Colony in New South Wales....On the 20th, the Atlantic transport anchored in the cove from Plymouth, whence she sailed with two other transports; from whom she had parted five weeks since in bad weather between Rio de Janeiro and Port Jackson, the passage from which had not been more than ten weeks.

She had on board a serjeant's party of the new corps as a guard to two hundred and twenty male convicts, eighteen of whom had died on the passage: except nine who were sick, the remainder were very healthy.[2]

One hundred convicts were sent from the Atlantic to Parramatta, the remainder were landed and disposed of at Sydney. The small amount of livestock was also landed at Parramatta directly after arrival and placed in an enclosure separated from the others.[2]

A black, the same who had secreted himself on board the Supply when she went to Batavia, having found means to conceal himself on board the Atlantic on her departure for Calcutta, and to remain concealed until she had left Norfolk Island, was brought back again to the settlement (Sydney), notwithstanding he endeavoured to escape from the ship in the Ganges. As it appeared that he had served the term for which he was sentenced to be transported even before he got off on board the Atlantic, no punishment was inflicted upon him, and he was left at liberty to get away in any ship that would receive him on board. [2]

The Atlantic returned to Port Jackson from Calcutta on 20 June 1792.[7]

On 11 December 1792 she departed Port Jackson bound for England. She was carrying the retiring governor Arthur Phillip, accompanied by the Aboriginal Australians Bennelong and his friend Yemmerrawanne. Also on board were the last of the First Fleet New South Wales Marine Corps detachment


1). Simeon Lord arrived as a convict on the Atlantic 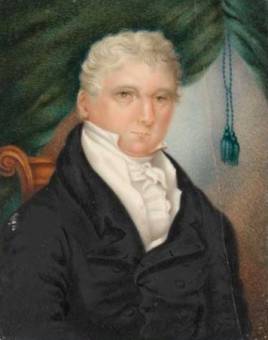 
2). John Heard who arrived as a convict died in March 1813 age 70 years. He was buried in the Old Sydney Burial Ground

3). Thomas Alford who had been tried in Somerset was transported in the Atlantic. He leased a farm at Farm Cove. In 1814 he applied to Governor Macquarie to have his wife Mary Alford join him in New South Wales, however Thomas returned to England on the Kangaroo in 1817........

Governor Macquarie to Under Secretary Goulburn.
Sydney, N. S. Wales, 17th May, 1814.
Sir,
Thomas Alford, an Old and very faithful Servant to Government, who has been for upwards of Twenty five years in this Colony, the greater part of which time he had served as Head Government Gardener to the entire Satisfaction of every successive Governor, having determined to pass the remainder of his days in this country, is particularly desirous to have his wife (who is still alive in England) and any of his family who Request for free may be willing to accompany her, sent out to join him, provided it could be done without any expense, which he is unable to defray. I have therefore to request you will be so good as to move Lord Bathurst to have the Goodness to order a Passage to be found for Thomas Alford's Wife and such of her family, as may wish to accompany her, at the expense of the Government on board of one of the first Convict Ships from England to this Colony. The following is Mrs. Alford's Address, viz. Mary Alford, Curry Rivle, near Taunton, Somersetshire, England. I also enclose a letter from her Husband for her, which I take the liberty to request you will have the goodness to forward, and shall esteem it a favour if you will be so good as to give the necessary facility to the request contained in his Letter - HRA, Series 1, Vol. VIII, p. 252.

4). Some of the vessels of the Third Fleet were to proceed to the Southern Whale Fisheries after unloading the prisoners; the rest were bound for Bengal where they were to be freighted back to England with cotton. The sailors on board the Nootka ships were to have nine guineas for the run to Botany Bay after which they were to share as whale fishermen do. The other sailors were paid twenty five shillings per month. (The Times 15 March 1791)

[6] The Settlement at Port Jackson, by Watkin Tench