The Mary Ann was the next convict ship to leave England bound for New South Wales after the departure of ships Surprize, Neptune and Scarborough.

One hundred and fifty female convicts were brought to the Mary Ann from counties and cities throughout England. An article in The Reading Mercury and Oxford Gazette describes a Court Session at the Old Bailey in 1789 when the sentence of Death was first handed down to some of the women who were later transported on the Mary Ann....

Thursday at the Old Bailey, the Recorder passed sentence of death upon 26 capital convicts. He stated that it was a circumstance much to be lamented, and too plainly deplored the increasing depravity of the times, to have so many wretched criminals standing at the bar to be prematurely cut off from society for their several offences.

When the law consigned so many unhappy vicims to death, it held forth this wise lesson to prudent persons, that to be honest industrious and viftuous is to be happy. He then bid them a solemn farwell, desiring them not to indulge any hope of mercy, to employ the short space allowed to reconcile themselves with their offended God, and offered up an earnest prayer that the Father of all Mercies would pardon their crimes and offences.

It is the determination of Government, that all future pardons shall be on condition of transportation for life. And as a further means of clearing the country of thieves and vagabonds the destination of all felons convicted on transportable offences, is to be New South Wales. [6]

The Times reported in February 1791 that on the morning of the 14th February female felons in Newgate preceded by Mr. Akerman, the gaoler, were put on board lighters to convey them to the transports at Woolwich. [2]

The Mary Ann departed England on 16 February 1791 with one hundred and fifty women. This brought the total of female prisoners embarked in England to 650 women. 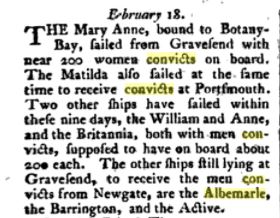 The Mary Ann was one of the vessels of the Third Fleet provided by Messrs. Camden, Calvert and King contractors for the Commissioners of the Navy for the conveyance of convicts to New South Wales [1]

Other vessel of the Third Fleet included:

One of the prisoners on the Mary Ann was a young mother of three by the name of Mary Talbot. She had previously been put on board the Lady Juliana but managed to escape before the vessel sailed. She was re-captured and tried at the Old Bailey. She received a sentence of Death with recommendation for mercy. After finding that she was with child, her sentence was stayed and she remained in Newgate prison. In December 1790 the London Times reported that she was on the list of capitally convicted prisoners who had received His Majesty's pardon on condition of being transported to New South Wales for their natural lives; except for Mary Talbot, who said she had rather die, as she had three infants, and it was that which made her return from transportation. The Recorder pointed out the fatal consequences in vain; she persisted in dying, and was taken from the bar in convulsions. Despite her protestations, she was embarked on the Mary Ann for transportation to New South Wales.

Read Mary Talbot's Letter published in The Times in October 1791 which gives an account of the voyage of the Mary Anne.

The Mary Ann arrived at Sydney Cove on 9 July 1791 with 141 female convicts and six children, almost all in good health. She brought stores and nine months provisions for the women.......

On the morning of the 9th, the signal for a sail was made at the south head; nd before night it was made known that the Mary Ann transport was arrived from England, with one hundred and forty one female convicts on board, six children, and one free woman, some clothing and the following small quantity of provisions; one hundred and thirty two barrels of flour; sixty one tierces of pork, and thirty two tierces of beef. [5]

The Mary Ann had been only four months and sixteen days from England; and had touched at the island of St. Jago, where she remained ten days. The Master landed a boat in a bay about fifteen miles to the southward of Botany Bay; but made no other observation, than that there was a bay in which a boat might land. [5]

The convicts were brought out by contract at a specific sum for each person. But to demonstrate the effect of humanity and justice, of one hundred and forty-four female convicts embarked on board, only three had died; and the rest were landed in perfect health, all loud in praise of their conductor. The master's name was Munro; and his ship after fulfilling her engagement with government, was bound on the southern fishery. If however the good people of this ship delighted us with their benevolence, here gratification ended.

I was of a party who had rowed in a boat six miles out to sea, beyond the harbour's mouth, to meet them; and what was our disappointment on getting aboard, to find that they had not brought a letter (a few official ones for the governor excepted) to any person in the colony! Nor had they a single newspaper or magazine in their possession ; nor could they conceive that any person's wished to hear news; being as ignorant of everything which had passed in Europe for the last two years as ourselves, at the distance of half the circle. 'No war' the fleet's dismantled' was the whole that we could learn........'For heaven's sake, why did you not bring out a bundle of newspapers; you might have procured a file at any coffee house; which would have amused you and instructed us?' 'Why, really, I never thought about the matter, until we were off the Cape of Good Hope when we spoke a man of war, who asked us the same question and then I wished I had'. To have prosecuted inquiry farther would have only served to increase disappointment and chagrin. We therefore quitted the ship, wondering and lamenting that so large a portion of plain undisguised honesty should be so totally unconnected with a common share of intelligence and acquaintance with the feelings and habits of other men. [3]


1). Mary Talbot's Letter published in The Times in October 1791 which gives an account of this voyage.

2). Governor Philip's correspondence to Lord Grenville regarding the arrival of convicts of the Third Fleet dated November 1791

3). Mary O'Brien arrived on the Mary Ann 1791. She was later granted an absolute pardon and resided in Newcastle in 1825.

[5] An Account of the English Colony in New South Wales: From Its First ... By David Collins