James Thompson was employed as assistant-surgeon on two convict ship voyages to Australia:

Atlantic to New South Wales in 1791

Surprize to New South Wales in 1794

The Atlantic arrived in Port Jackson on 20 August 1791. Eighteen convicts died on the passage out. According to Charles Bateson in The Convict Ships, the high death rate occurred because of the British authorities sanctioning the embarking of men in bad health.....The convicts embarked at Woolwich and Plymouth and those taken aboard at Dunkirk hulk at the latter port had been in bad health. At least a dozen had been so ill that they had been unable to scramble up the ship's side, and they had to be hoisted aboard in a chair. Surgeon James Thompson had wished to exchange them for men physically better able to withstand the rigours of the voyage, but had failed to obtain the necessary authority. Six had died before sailing and another 12 of whom all but one had been number among the 50 on the sick list when the Atlantic had sailed, had died on the passage. However there were only nine men on the sick list when the Atlantic arrived. [1]

David Collins remarked on the return of James Thompson to the colony in October 1794...... We found also on board the Surprize a Mr. James Thompson, late surgeon of the Atlantic transport, but who now came in quality of assistant-surgeon to the settlement. [2]

Lieutenant-Governor Grose was informed by Henry Dundas that it was intended that James Thompson would succeed Thomas Arndell as an assistant surgeon [3].

By November 1802 James Thompson had become unwell. He applied to Governor King for a passage home......

Governor King to Lord Hobart
Sydney 17 November 1802
{Extract} As Mr. James Thompson had applied some time past to go to England to arrange some private affairs as well as to restore him to health, having some time past laboured under an asthmatic complaint, I took on myself to grant him that liberty on Mr. Thomas Jamison's return. It was intended he should have gone by a whaler but as he was disappointed by the ship not calling here, he has taken his passage in the Naturaliste; and as I have charged that gentleman with my dispatches to your Lordship, I beg leave to mention him as well qualified to give you every informaton your Lordshpi may require and which a twelve years' residence as Staff Surgeon will enable him to give.[6]

The Naturaliste, Captain Jacques Hamelin, with surgeon James Thompson on board, departed the colony on 18th November 1802. [7] 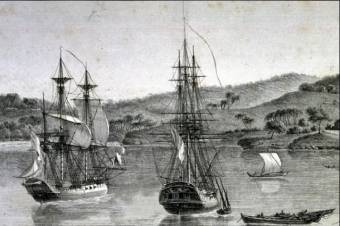 Already ill when he departed, James Thompson never returned to the colony. Governor King appointed John Connellan in his stead in 1806. [8]

James Thompson was entered in the Navy List in 1814[9]

[2] An account of the English colony in New South Wales : with remarks on the dispositions, customs, manners, etc. of the native inhabitants of that country, to which are added, some particulars of New Zealand / compiled, by permission, from the Mss. of Lieutenant-Governor King by David Collins p. 395

[3] The Right Hon. Henry Dundas to Lieutenant-Governor Grose. 15 November 1793
Mr. Thomson, who will succeed Mr. Arundel (Arndell), as an assistant-surgeon, will go out in one of the vessels, I have mentioned in the beginning of my letter; and by one of his Majesty's ships, which will follow, a Mr. Leeds will go out as an assistant-surgeon, upon whose arrival Mr. White will certainly be at liberty to return home. It may be proper to add here that it is intended that the assistant-surgeons shall succeed to the office of chief surgeon by rotation and according to their seniority from the dates of their commissions. I am Henry Dundas HRA, vol. I, p.455


[4] 27 July 1801 - Governor and General Order - William Balmain, Esq., principal surgeon having the Governor's consent to avail himself of the Secretary of State's leave of absence and being about to embark for England in the Albion whaler, Mr. James Thompson, first surgeon's assistant, will, on Mr. Balmain's departure, take that officer's duty in his absence and Mr. D. Wentworth will take the duty of assistant surgeon at Parramtta. HR NSW, vol. IV, p.421

[7] The Baudin Legacy. University of Sydney

[8] Governor King to Earl Camden, Sydney 22 February 1806 (Extract) - Being informed that Mr. James Thompson, assistant surgeon now on leave in England, has no intention of returning to this colony, and not knowing what the event of the sentence passed on Mr. Savage, another of the assistant surgeons, may be, and there being a great want of the necessary medical gentlemen to do duty here, I have taken it upon me to appoint Mr. John Connellan, who has been so strongly recommended by the Irish Government, as stated in the enclosed copy of Mr. Secretary Marsden's letter, to act as surgeon at Norfolk Island until you Lordship's further commands are received thereon...HRA NSW., Vol. IV, p20