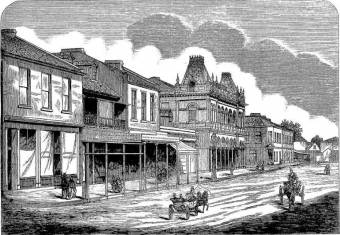 
A Trip to Maitland in 1826 - In 1826 a correspondent to the Monitor who possessed land in the vicinity of Wallis Plains (Maitland), made a voyage from Sydney to Newcastle in a cutter before transferring to a smaller vessel to convey him to Maitland. In a series of letters to the Monitor in June 1826 he described the trip up the Hunter River.


Colonial Military Officers -Officers who served or settled in Newcastle, Maitland and the Hunter Valley


Edward Denny Day -Police Magistrate at Maitland who was known throughout the district for his courage, integrity and persistent pursuit of justice.


Frank Darcy was the brother of Maitland's famous boxing champion Les Darcy. Frank Darcy died of the Spanish Flu in 1919


Hannan House - Hannan House was built on a 40 acre veteran's allotment by John Hannan. By the end of 1843 Hannan House had become a temporary hospital for the district when the Benevolent Asylum situated in Caroline Chisholm's barracks became inadequate for the needs of the community. The house was used in this capacity until the new Maitland Hospital was opened in 1849.


Hunter Valley Steamers - Information about some of the paddle steamers that plied the Hunter River in 1830's and 1840s.


Inns and Hotels in Maitland - Links to information about Inns and Innkeepers in East and West Maitland 1820's - 1840's.


Maitland Gaol - Find out more about the history of Maitland Gaol which in 1848 became the main gaol for the Northern Circuit District. Prisoners confined in Newcastle gaol numbering about forty were transferred by Steamer to Morpeth and transferred to Maitland Gaol in December 1848.


Police Force in Maitland - A list of Police Magistrates, Chief Constables and Constables known to have served at Maitland 1830's - 1850's

Residents and Landowners at Maitland 1840s -