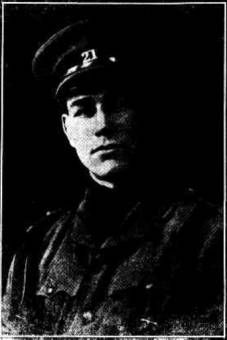 ...Frank Darcy in his uniform as a compulsory trainee

Francis Michael Darcy, known as Frank, was born at Oakhampton near Maitland on 8th April 1899, the fourth son of Edward and Margaret Darcy. Also known as Frosty Darcy, he was the younger brother of Maitland's famous boxing champion Les Darcy.

In 1915 when just sixteen years of age, Frank took part in the preliminaries at the famous boxing match between Les Darcy and American Frank Loughrey at Sydney Stadium - Frank Darcy's opponent was Tommy Ryan who was known as a very fierce little fighter. After a nervous beginning, the 'East Maitland kid' began to get into his stride and hit with great strength and good direction. The very large crowd cheered him continually. Every time he landed a good punch the whole house roared encouragingly. It was Frank Darcy's first win in Sydney and he was magnificently cheered at the end. [1]

Will Lawless otherwise known as Solar Plexus described Frank Darcy - 'if less promising than Les, he is notwithstanding, chockful of fighting instinct and ability. Although he did not follow in the footsteps of the champion of champions and take on blacksmithing, preferring the calling of a baker, he has the same strong neck and shoulders, and now that he has started to grow, has developed into a fine figure of a man with a K.O. punch in either hand, as was shown by the manner in which he outed Dan Tierney, and Al Cullen and the Victorian champion Barney Thompson in recent battles.' [2]

Frank's brother Les Darcy died in Memphis Tennessee from pneumonia following septicaemia and endocarditis on 24 May 1917.

Frank out-lived his famous brother by only two years, succumbing to the Spanish Influenza just over a hundred years ago on 8th May 1919.

In a later article in the Newcastle Morning Herald the writer revisited the dark days of the Spanish Influenza and the effect it had on Newcastle and Sydney as the epidemic swept through the country in the year following World War 1.

Interstate trade and travel were practically brought to a standstill by Commonwealth and State Government restrictions. State borders were closed, and interstate and coastal ships met rigid restrictions at quarantine stations. The epidemic raged in Victoria before spreading to New South Wales.

While scores of patients were being admitted to hospital each day in Sydney, a rigid check was kept on people leaving the city . All who left by train had to sign a declaration that they had

1. Not been in contact with an influenza patient for three days.

2. Passed through an inhalation chamber in the 24 hours before travelling.

3. Been inoculated within three months.

In addition to these requirements, they needed a medical certificate stating that they had no symptoms of influenza. Interstate travel on ships was similarly restricted and all ships coming and leaving had to be held at quarantine for four days.

At the Government's request, a medical consultative council was formed. The council, mainly of doctors, advised the Health Department and municipal authorities throughout the epidemic. They recommended the use of masks, border restrictions, compulsory notification of patients, and their early removal to hospital, as well as strict quarantine.

The council advised people to avoid crowds, observe personal cleanliness, keep in the sunshine, and prevent spitting and dirty habits. Most doctors said over indulgence of alcohol was dangerous because it lowered resistance to infection.

In Sydney, where the incidence was the highest in the State, health authorities closed theatres, picture shows and schools in the metropolitan area. Because of the risk of infection, church services, auction sales and race meetings were banned. A bylaw was passed forcing men and women to wear air filter masks. Police who patrolled the streets warned of the possibility of arrest of pedestrians continue to walk with the masks slung about their necks. In the Central Court, those caught not wearing the filters in trains were fined £2.

Many businesses had their own inhalation rooms where staff stood in the foggy interior before leaving work. On the railway station passengers walked through a canvas tent-like maze, attempting to seek immunity before donning their masks for the train trip home.

About October 1918, Newcastle residents evidently realised they would be fortunate if the epidemic did not reach the city . A start was made to clean up the municipality . A house-to-house inspection was made so a record could be kept of general cleanliness, respirators were stocked in Newcastle shops, and continuous warfare was being waged against rats. Health Department inoculation centres similar to those operating in Sydney were set up in the municipality .

In the first two months of 1919, 725,000 people were inoculated in N.S.W., including 225,000 from the country . Thousands had died in Sydney and Melbourne before there was notification of a case in Newcastle, early in February, 1919. The patient came from Islington, and appeared to be an isolated case. A month later when there was a lull in Sydney and the Medical Consultative Council recommended that masks were no longer needed, the epidemic started in Newcastle. On March 3 an influenza patient died in Newcastle Hospital. Two days later five nurses a wardsman and a patient who had been in the same ward had caught influenza. In the following months emergency hospitals at Wallsend and Waratah Benevolent Home received hundreds of patients. Each day lists of the dangerously ill, seriously ill, ill and convalescent patients were published. With the epidemic there came distress. Kitchens were opened in Newcastle district to feed those unable to fend for themselves. There was a shortage of staff at practically all shops and offices. The Post Office staff was so depleted that telephone services were delayed and no telegrams were delivered for a period. In two years 11,552 people died in Australia as a result of influenza. Other countries suffered far more. It is now estimated that about 20 million people died in the world in the 1918 -19 epidemic .[3]


Taken Before His Time

In 1936, seventeen years after the death of Frank Darcy, his friend and trainer Dave Smith penned an article for the Sydney Truth posing the question - What chance had Frank (Frosty) Darcy of emulating the deeds of his famous brother Les had he not been taken before his time by the devastating pandemic sweeping the world, the Spanish Influenza? -


' The younger brother, Frank, helped by the successes of Les, was better educated and was a charming companion. He was a baker and handling the heavy dough had developed muscles that made him a terrific puncher. He was a heavier thumper than Les, but was not so rugged and tough. Frank started his boxing career well, with a run of successes and was defeated only once. That little tiger, Fred Fitzsimmons, stopped him in fourteen rounds when Frank was but 17 years old. Frank's advisers showed possession of little grey matter when they matched a mere novice against such a wily veteran.

On his defeat, Frank lay off for a couple of years. But the lure of the ring saw him back cleaning up nicely in a few minor bouts. He then placed himself in my hands. And how that lad revelled in his work! He won a few more scraps, then finally we see him as a principal opposed to the Victorian welter, Barney Thomson. Our corner collected over £300 for this effort. T'was heartening indeed for Frank, to receive such an amount for his first 'main' in Sydney.

For this bout he had taken a holiday and trained diligently. He won all right, but to me his effort was disappointing. Heavy work had contracted his arm muscles so that his punches lacked weight and speed. Inhaling flour continually had also played havoc with the lad's innards. He needed a months' absence from employment to shake off the ill effects. So we accepted an invitation to join a fishing camp at Lake Conjola on the South Coast.

Les Darcy's late host and friend Harry Pearce, and his brother Sid, were sending loads of fish to the markets from the lake, so both of us looked forward with pleasure to the holiday at their camp. So Conjola was our next outing, and what with swimming, pulling heavy boats and the heavy nets, the outdoor life was glorious. Sleeping in tents midst the trees was truly grand. Darcy benefited especially. He was on the move at break of day, and kept going until darkness appeared. The worst of it was he also kept me on the move.

Some members of the Milton Progress Association motored down one day to our camp and invited us to their sports and the following dance. They asked Frank and me to give an exhibition of boxing at the dance. As the Association funds were at a low ebb we agreed to the proposal. We began with a lecturette, illustrating as we proceeded the various blows and stops. Then we finished off with three rounds of snappy boxing, and, believe me It was snappy! In all my experiences I never received such a drubbing. He hit me with everything and I had just 'to grin and bear it.' Later Harry Pearce remarked, 'Say, Dave, Frank gave you some hurry up to-night all right.' 'Sure he did,' said I. 'I'm through, Harry, but I'm sure he's coming and I had to make him look good.'

We had a further request for a similar show in aid of the funds of the Nowra Football Club on the following Friday. The bout was staged in a picture show and I thought, getting into the ring, 'You're not going to have it all your own way tonight, me lad.' Again we ran through the various punches, in preparation for the three serious rounds that were to follow. Someone belted the gong. The fastest rounds I ever boxed followed and as the final gong sounded I slapped him on the back and said, 'You're going to be a good 'un, son,' to which he replied, ‘This trip has made a man of me. I think I can beat Tommy Uren now.'

However, that was the last time he ever donned the mitts. The Grim Reaper was swinging his scythe awaiting our return to Sydney where Frank contracted pneumonic influenza, at that time taking toll in all directions, and this fine lad passed on May 8. 1919 .[4] 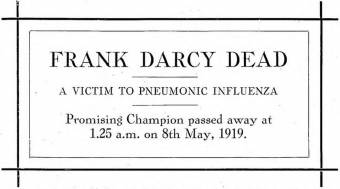 Frank's death occurred at 1.30am on 8th May 1919 at St. Vincent's Hospital Sydney. According to The Maitland Daily Mercury he had been visiting his family home in Emerald Street, East Maitland and had returned to Sydney three weeks previously. He became rapidly ill and died within a week. His funeral was to leave East Maitland railway station on arrival of the train from Sydney on the afternoon of 9th May 1919 for the East Maitland Roman Catholic cemetery.[5]

Solar Plexus - How terrible it is to think that but one week or so previous to that 8th day of May, poor Frank was fairly bubbling over with health, and with happiness at the thought that almost immediately he would be starting to prepare, under his tutor manager Dave Smith for his contest with middle weight champion Tommy Uren. Poor Frank had had his last fight, and if there is to be another champion from that family we must wait until little Jackie, now about sixteen years of age, has sufficiently developed to take up the running so suddenly left incomplete by his famous older brothers.[2]

Such had been Dave Smith's confidence in Frank's boxing ability that he believed he would go far in equalling the wonderful deeds of his famous brother. 'But that was not to be as the poor lad is no more, and all that remains of one brother that was going to electrify the boxing world now lies in his last resting place, with the brother who did.'