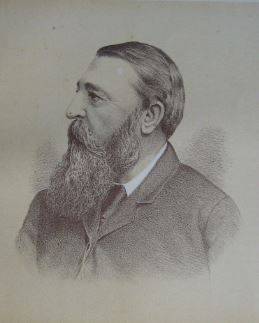 
Cosby William Morgan was born at Michelmarch, Hants, son of Margaret and John Morgan. He was Christened on 14 January 1835. In the 1851 census he was recorded as a medical pupil aged 16, residing at Carmarthenshire, Wales with his mother, a widowed fund holder and sister Emily aged 12. His older brother Allen Bradley Morgan, born 1831 in Somerset, had already left home in 1851 and was living and working as an assistant at the residence of Andrew Davies, Petwyn Surgery. [1] Allen Bradley Morgan emigrated to Australia in 1856 arriving at Melbourne on 2 May 1856.[2]

In November 1859 Cosby W. Morgan of St. Bartholomew's Hospital was reported to have passed his preliminary examination in Anatomy and Physiology. When eligable would be admitted to the pass examination for the membership of the Royal College of Surgeons. [3]

Cosby Morgan emigrated to Australia soon afterwards; he was residing at Newcastle by December 1859 when he gave evidence at an enquiry. He married Jessie Howison Paterson (b. 1834 in Lanark, Scotland) at Sydney in 1860. He was appointed surgeon of the Newcastle company of volunteer rifles in April 1861 - [4]

Some of the many cases he attended at Newcastle included:

Treated Elizabeth Hunter after her clothes caught fire at a house in King Street Newcastle and later testified at the inquest into her death. Illawarra Mercury 30 April 1861

The first building used for a hospital at Newcastle was a dwelling that had been built by Sir Henry Browne Hayes c. 1810. When he departed the settlement the cottage was purchased by Government for use as a hospital.

In 1817 a building intended for a gaol which had been built by convict stonemason James Clohesy was converted to a hospital to replace the early cottage building.

In 1827 the Sydney Monitor reported that the hospital building, formerly a gaol, was in a great state of dilapidation and that a site had been selected by authorities to construct a new building. In 1831 plans were set in place to convert the old prisoner barracks into a hospital, however these plans may have come to naught.

The hospital at Newcastle in 1861 was said to be still an old convict building and although committees had been appointed and plans were underway to build a new hospital, it wouldn't be started for another four years, the foundation stone being laid on 9th November 1865. Meanwhile the old hospital was in a dilapidated and dirty state with decayed timber and poor ventilation.

Cosby Morgan gave no indication of the poor state of the hospital in his report for the year 1861....Medical Officers' Report - Newcastle Hospital - It becomes my duty, at the close of this current year to give you a detail of the cases which have been treated at the Newcastle hospital, and while thanking you for the confidence you have reposed in me during the past year, I have the satisfaction of reporting that the mortaility during the year is nearly four per cent lower than on any previous year, and that there now remain in the hospital but two patients - one rapidly convalescing, and the other patient employed as wardsman. Seventy three patients have been under medical treatment at the Newcastle hospital during the past year - seventy males and three females. Of these sixty eight have been discharged, three have died and two remain. The causes of death have been peritonitis, one; dysentery, one; phythises, one; total three. The cases which are generally known as medical cases, or those under the physicians' care have been thirty seven in number. The surgical cases have been thirty six. - Asthma, five; bronchitis, four; pleurisy, one; pneumonia, two; haemoptysis, one; phthisis one; peritonitis one; dysentery, four; diarrhoea, three; diseases of the liver, two; colic, one; typhoid fever, three; rheumatism, five; neuralgia, one; hemiplegia, one. Surgical diseases and injuries - abscesses, one; ulcer, three; erysipelas, one; burn, two; opthalmia, two; inflammation of joints, two; haemorrhoids, one; catarrhus , one; stricture, one; hydrocele, one; phymosis, one; fracture of the thigh, two; fracture of the leg six; fracture of the arm one; fracture of the ribs, two; minor injuries six. [5]

In September 1862 an inquest was held at the Caledonian Hotel on the body of Frederick Hemphill who had been treated at the Newcastle Hospital prior to his death. Dr. Morgan was the attending surgeon and later gave evidence and described the terrible state of the hospital as it was at that time: the conveniences which the present hospital affords for the treatment of surgical cases are most inadequate; I never saw a worse hospital during the course of my experience in any part of the world; in my opinion, I think the patient would have had a great chance of recovery in an airy well ventilated cheerful hospital, and if he had had the convenience of a separate apartment; there are only two wards in the Hospital; I was obliged to put him in a ward where there were several persons seriously ill of various diseases. I am the sole acting surgeon of the Hospital; I believe patients suffering from severe diseases or accidents would be prejeduced as to their recovery by the miserable accommodation of the Newcastle Hospital. [6]

Apparently intent on updating his qualifications, Cosby Morgan disposed of his practise to Dr. Bowker in 1863 and departed for England as Surgeon on the Rifleman - the attention, talent, and energy displayed by this gentleman while resident in Newcastle has endeared him to a host of friends as well as professional acquaintances whose sorrow at his departure will not be unlinked with pleasure if it should turn out that his leaving Newcastle has been the means of bettering his professional status. [7]

He did not return to Newcastle at this time however as he was working at Forbes, Gundagai, Bathurst and Sydney until 1877 or 1878.

He was Honorary Surgeon at the Sydney Infirmary in 1877 - He attended an ovariotomy performed on 20 June 1877 in Sydney by Drs. Fortescue and Scheutte. Allen Bradley Morgan assisted in theatre. Dr. Cecil Morgan administered methylene [10]

In 1878 after an absence of fifteen years Cosby Morgan returned to Newcastle. By this time the old convict built Hospital had been replaced. The first section of the new building had been constructed in 1865 - 66 by architect and builder George Hery Cox under the superintendence of Mortimer Lewis. 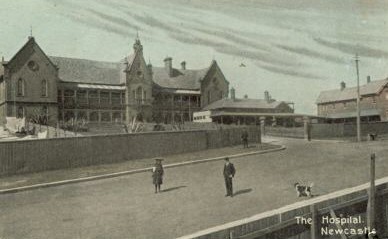 Cosby Morgan was appointed Government Medical Officer and additional vaccinator for the district of Newcastle in 1878 - [11]. He was also a member of the United Grand Lodge of England Freemason at Newcastle from 1879 [12]

In 1880 he replaced Dr. Samuel Knaggs as Honorary Medical Officer at Newcastle Hospital and in that same year was elected alderman.

When the new wing of Newcastle Hospital was opened in 1883 he was medical officer in charge and at the time claimed that he was probably the only remaining officer of the original hospital. [13] He served as mayor in 1885 and was also a magistrate.

3). Cosby Morgan's daughter Annie was married at the residence of his brother Allen at Bowral in 1890.....
Marriage of Miss Annie D. Morgan, daughter of Dr. Crosbie Morgan of Newcastle and niece of our esteemed townsman Dr. A. B. Morgan with Mr. Edgar A. Cottee, eldest son of Mr. W.A. Cottee, Manager of the Australian Mortgage, Land and Finance Company of Sydney took place on Wednesday last 26th February at St. Simon and St. Jude's Church Bowral. The bride was given away by her father and had four bridesmaids, her two sisters Miss Carrie and Miss Rosie Morgan and her two cousins, Miss Jessie and Miss Amy Morgan. Goulburn Evening Penny Post 4 March 1890

5). Patients and staff at Newcastle Hospital in the early days