Francis Moran arrived on the Mary Anne in 1822. He sailed to Newcastle later that year where he accepted a medical appointment replacing William Evans.

Francis Moran became an early land owner at Hunter's River. He was a member of the 48th Regiment and was appointed assistant surgeon at Port Macquarie after Abraham Fenton in 1824.

Francis Moran was probably in Port Macquarie in 1825 when one of the assigned servants at his Hunter River estate absconded before joining other runaways from the farm of Vicars Jacob. Together they formed a gang of bushrangers who became known as Mr. Jacob's Irish Brigade (Jacob's Mob) This gang terrorised the district for months.

In June 1827, Moran announced he was retiring from his position in the Public Service Medical Department at Port Macquarie. At this time he had not decided whether to enter his profession in Sydney or retire to his estate at Hunter River however by February 1828, he was living in Pitt Street Sydney while his farm was leased out.

The farm called Duck River Farm he leased to William Bucknell in June 1828 for &;pound100 per annum. The property consisted of a dwelling house and out offices and a large farm; the ground, cultivated with corn and potato crops, was fenced in and surrounded the dwelling house. Moran and the Bucknell family were in conflict over a wheat crop and Moran evicted the family from the property when William's daughter and young son were present, William having left the farm to attend Court. The Bucknells then moved to Elmshall at Vacy. John Eales marriage to Jane Lavers took place at their residence at Vacy at this time. Later the Bucknells moved to the nearby property belonging to Dr. Shortt.

An overseer was employed to run Moran's estate in his absence. In 1828 Bryan Spolin (Spalding) who had arrived on the Britannia in 1797 was overseer. His wife Mary was employed as a dairywoman. Servants assigned to Dr. Moran who worked under Spolin in 1828 included John Skycroft, John Buckley and William Bullingham.

Francis Moran resided at Maitland from 1828 to 1831. He successfully treated children afflicted with whooping cough in 1829 and was present when the Lord Liverpool ran aground at Newcastle in 1831. Read about his contribution to the rescue here

His duties and remuneration are noted in the following correspondence from Governor Darling to Viscount Howick in 1831......

Employment of F. Moran as surgeon at Maitland. Governor Darling to Viscount Howick. (Despatch per ship Sovereign.)
My Lord,
Government House, 12th April, 1831.
I have the honor to acquaint Your Lordship, in reply to Mr. Hay's Letter of the 18th of September last, that Dr. Moran was employed to attend the Sick of the Mounted Police at Maitland from the 1st of January to the 31 December, 1828, Supplying Such Medicines as they might occasionally require, for which he received the Sum of &;pound38. From the 1st May, 1829, to the 8th of January, 1830, he was allowed at the rate of &;pound100 per Annum, the care of such Convicts, belonging to Road Parties or otherwise employed in the Service of Government, having been added to his former duties. The principal object of Mr. Moran's employment was to prevent the necessity of Sending Such Men to the Hospital at Newcastle, a distance of 20 Miles, as did not require Hospital treatment, it being a common practice with the Prisoners to feign illness, in order to avoid Working on the Roads. By this arrangement, all slight cases were attended by Dr. Moran, and, as he inspected the Men at Maitland, coming from the interior on their way to Newcastle, many were prevented proceeding who did not require being Sent to Hospital. I did not report the Circumstance, as the Situation of Mr. Moran was not considered in the Nature of an appointment but as a Contingent Expense, as he was bound by his agreement to supply the Men whom he attended with Medicines. I have, etc, Ra. Darling. [3]

The convict ship Southworth arrived in Sydney under command of John James Coombes in June 1832. Francis Moran departed Sydney on the Southworth in July 1832 bound for Madras. They called at Timor 6th September 1832 before arriving at Madras on 14 October 1832.

Francis Moran remained in India for some years before returning Australia. When he returned he was already unwell, having been plagued with rheumatism for years and under the effects of an intemperate lifestyle. He took lodging in Pitt Street Sydney at the house of Mr. Quinn. Within a few months of his return he was in trouble with the authorities and was imprisoned for 'an impropriety of conduct in the Police Office'. Although he was released the next day, from that time he complained of pains in his limbs and became confined to his bed for several weeks, attended by an elderly man Miles MacDonald. As his end neared he became delirious, requesting MacDonald to remove his boots, although his feet were bare, and taking excessive doses of laudanum. After his death an inquest into his death by Dr. Hosking at Wood's Hotel in Pitt Street, found that he had died of disease induced by intemperate habits. Mr. Quinn was to apply to the Commander of the Military Forces to establish whether Dr. Moran was to be buried with Military Honours. 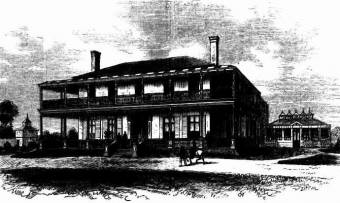 His estate was acquired by H. Osborne who later sold it to John Eales. Duckenfield House was then built on this property by John Eales. [2]

The estate was described when it was put up for auction in January 1834 - That well known very fine Estate situate on the South Bank of the River Hunter, distant about four miles from Green Hills called Moran's Farm, and adjoining the Estate of Mr. Eales. This property comprises nine hundred acres of very superior land, well watered in the driest seasons, and suitable either for Agricultural or Pastoral purposes. It has the advantage of a frontage of upwards of a mile on the most navigable part of the Hunter, with sufficient depth of water up to the bank for the Steamers, which pass daily or other vessels to receive produce. About one hundred acres are cleared and principally in cultivation; a very considerable quantity of Fencing has been put up, and a Barn, Cottage and other Buildings are placed on a gently rising eminence commanding an extensive and beautiful view of the River and surrounding scenery. [1]

The Maitland Mercury gave the following description of Duckenfield House in 1872: -

The Duckenfield Estate is situated near Miller's Forest, between five and six miles below Morpeth, on the banks of the river Hunter. The House, which stands on a slightly rising ground, about five hundred yards from the river, forms a prominent object in the landscape, and must be familiar to all who have travelled by the steamers between Morpeth and Newcastle. It was built some sixteen or seventeen years ago, and was until lately simply a large square stone building, with no pretensions to architectural beauty, and noticeable solely for a certain air of massiveness and solidity. Being built of Sydney sandstone, of various colours, laid without any attempt at uniformity it presented a rather patchy appearance - some of the substantial blocks of stone being for instance of a light shade, others of a dark and sombre hue; some were red, and some yellow; some were veined, and some were streaky. A very plain verandah surrounded the front portion of the edifice, and a great ungainly door such as would grace a barn, formed the principal entrance.

At the time Duckenfield House was built the elegancies of life were little studied, and the house, being comfortable inside, was considered rather a model of architecture than otherwise, as indeed it was, compared to the ugly brick buildings so dear to the heart of the venerable Governor Macquarie. A change has now, however, come over the spirit of the dream. The present proprietor, John Eales Esq (junior)., with commendable enterprise and liberality, has determined to make Duckenfield House a mansion worthy of the present enlightened age, and with this view he has spared neither time, trouble nor expense. The whole aspect of the place has been altered; every improvement that modern art and science could supply has been adopted, and the result is a success that reflects credit alike upon the proprietor and upon those whose taste, industry, and skill have been engaged in carrying out the plan. On travelling to Duckenfield House the traveller passed by Berry Park, where the late Mr. John Eales resided for many years, and where the present inheritor of the name was born. This building is now unoccupied, and presents the somewhat mournful appearance that is inseparable from an empty house. Not very far distant on the left of the road is Berry House, the residence of Mr. William Eales, apparently a comfortable and cheerful spot. A few minutes drive brings the traveller to Duckenfield House.....continue

[2] Mitchell, Cecily Joan , Hunter's River : a history of early families and the homes they built in the Lower Hunter Valley between 1830 and 1860 : Administrator of the Estate of Cecily Joan Mitchell, Newcastle West, N.S.W., p. 58