George Brooks arrived in Hobart on the David Shaw on 16th October 1819. [3] He was appointed assistant surgeon at Sydney by Principal surgeon James Bowman in 1819. 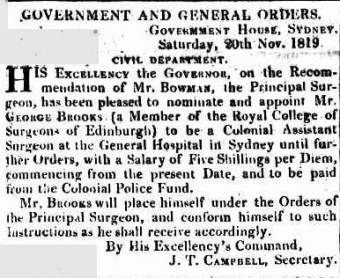 He was appointed to Newcastle in 1822 and promoted to the position of Surgeon in 1829. At Newcastle he resided in a brick built house with out-buildings and a garden. (See Newcastle buildings in 1822)

In 1824 he had the burden of running the hospital with untrained, inadequate female assistants and convicts and probably inadequate supplies.

As Magistrate and Doctor in the town, George Brooks' duties probably often overlapped. In 1830, acting as Magistrate he sentenced convict John Mason to 100 lashes for threatening the life of his overseer. One of the surgeon's duties was to witness the flogging of prisoners and he had left instructions that Mason was not to be flogged without his presence. While awaiting punishment at the gaol, Mason died with a noose around his neck and his hands tied. Brooks arrived in time to pronounce him dead and later testified in the Court case that ensued.

Mary Stephena Cowper was the daughter of Hannah (Horner) and Rev. William Cowper. She arrived with her father and three brothers Henry, Thomas and Charles and Rev. Cowper's new wife Ann Cowper on the Indispensable in 1809.

Mary brought to the marriage a land grant of 1280 acres to be named Maryland. They built their family home on land he had purchased nearby. By 1829 George and Mary had a daughter Hannah. John was born in 1833 and Mary in 1837.

Below George and Mary Brooks' land near Iron Bark Creek.....

In January 1831 George and Mary Brooks accompanied Sir William Parry to Maitland. They called on Captain Aubyn, Mr. Bloomfield and Mr. and Mrs. Wood with whom they dined in their new log hut. They stayed the night at Mr. Bloomfield's property and heard the news of the latest devastating floods, Maitland being in broad sheets of water at the time. In December that same year George Brooks and Rev. Threlkeld were on board the steamer Sophia Jane when she received the first two tons of coal from the new A.A. Company workings. [1]

On a stormy day in 1836 he accompanied traveller James Backhouse around the settlement, acquainting him with the Christ Church burial ground where convicts could be seen toiling as well as other sights around the town. [4]

An interesting article regarding George Brooks' living quarters at Newcastle was published in the Newcastle Morning Herald in 1911......

The Colonial Secretary informed the Police Magistrate at Newcastle on 29th January 1838 as follows:

'Sir, - The commanding Royal Engineer having submitted a letter from Lieutenant Lockhart, at Newcastle, representing that his horse which he had placed for a short time while bathing, in the plot of ground in front of the quarters formerly occupied by the Colonial Surgeon, has been impounded by Dr. Brooks with a charge of five pounds as damages, I am directed by his Excellency the Acting Governor, to request that you will inquire and report the circumstances under which the horse was impounded, and how the pound keeper levied such heavy damages, which you will ascertain by calling him before you should you consider it necessary. It appears by the report of the commanding Royal Engineer that Dr. Brooks has no claim on the building or the ground attached to it, he being in the receipt of lodging money and therefore can have no right whatever, to call for any damages'

The above letter was received by the police magistrate on 30th January having evidently been despatched by boat on the day that it was written. The magistrate appears to have shown it to Dr. Brooks or else to have given him a hint of the nature of it for on the 31st January the doctor wrote as follows to the Colonial Secretary:

'Sir, - I beg that you will have the goodness to submit at your earliest convenience this my application to his Excellency the Acting Governor for his Excellency's permission to occupy the garden attached to the surgeons quarters until it is required for the public service. I have been at some expense in improving that garden and my family depend on it for supplies of vegetables; the sick in the hospital have the benefit of it also. Perhaps I may add that the fire which compelled me to leave these quarters has occasioned me a loss of &;pound30 and persons who have no right to those premises have begun to make use of them' The letter was signed 'Geo. Brookes, Col. Surgeon

A corner of the letter had been turned down, and in the Colonial Secretary's hand writing were written the words: 'I know nothing of this matter. Request the report of the police magistrate Febr 2' A letter was accordingly sent to the magistrate requesting him to furnish the colonial Secretary with a report on the circumstances alluded to in the doctor's communication.

That report was submitted, and, so far as the Colonial Secretary was concerned, the matter closed with the despatch of the following letter to the police magistrate on 19th February 1838: 'Sir I have had the honor to receive and to submit to the Acting Governor your letter of the 3rd instant, enclosing communications from Surgeon Brooks and Lieutenant Lockhart relative to the impounding of a horse of the latter gentleman by the former, and in reply I am directed by his Excellency to request that you will inform the parties that although Lieutenant Lockhart does not seem to have used much courtesy to Dr. Brooks on the occasion yet the latter had no right to lay damages for the trespass on property which was not in his charge. The law however, admits of every person impounding an entire horse, if found loose and it is the duty of every constable to do so particularly if found within a town and on Government land without authority. If Dr. Brooks wishes to retain for any time the use of the premises formerly the surgeon's quarters at Newcastle and now in question his Excellency is not aware that there will be any objection to it under the circumstances; but it will be necessary for him to apply and obtain such sanction through the commanding Royal Engineer.'

The building that had been in use as surgeon's quarters in Newcastle was sold and demolished in 1838 as the following letter, dated 6th July 1838 from the Colonial Secretary to the Police Magistrate shows: Sir, I duly received and submitted to the Governor together with the report of the commanding Royal Engineer thereon, your letter of the 4th ultimo recommending that the contemplated sale of the materials of the late surgeon's quarters may not take place. In reply, I am directed by the Governor to inform you that it appears a portion of the ground on which the building stands encroaches on the line of the street; from which circumstance, in addition to the bad state of the house, his Excellency considers it better that the arrangement already ordered for disposing of the materials should be carried into effect.

George Brooks was one of the citizens of Newcastle who campaigned to make Newcastle a free warehousing port in the 1840's. Other Newcastle citizens who attended meetings with him were James Henry Crummer, James Reid, Simon Kemp, William Wilton and Mr. Wallace. Around the same time charters of incorporation were issued for Newcastle and Brooks became a member of the district council along with Alexander Walker Scott, William Croasdill, William Brooks, Lancelot Threlkeld, Simon Kemp and Henry Boyce.

In 1841 his residence was nearby the Hospital - Newcomen Street Newcastle. He resigned from his position of Colonial Surgeon due to ill health in April 1847.

George Brooks died in 1854 aged 57 and was buried in Christ Church burial ground where Mary who died in 1859, was also laid to rest.

The grave site was described in 1902.......Close to the gate leading into the church yard there is a grave which links the present with the period when Captain Bingle first became interested in Newcastle. The tomb is that of Dr. George Brooks one of the early colonial surgeons. Although the memorial is fast wearing away the inscriptions can still be plainly read and are as follows - Sacred to the memory of George Brooks Esq., who departed this life May 2 1854 aged 57. Also Mary Stephena, wife of the above and eldest daughter of the Venerable W. Cowper D.D., Archdeacon of Cumberland who died April 17 1859 aged 54.

[4] Extracts from the Letters of James Backhouse