Charles Inches kept a Medical Journal which commenced on 18th December 1832 while the ship was still in England.

The Guard consisted of 1 subaltern of the 26th regiment, one sergeant, one corporal and 27 rank and file of 21st Fusiliers accompanied by 5-6 women and 11 children under command of Captain Frazer of 26th regt., They embarked at Deptford on 28 December 1832.

Cholera was still rampant in Ireland and as well the prisoners had a very restricted allowance of food in their diet on the hulk amounting to only 20 ounces a week per man, so that by the time they were embarked on the Portland their health was in a poor way. Later the surgeon remarked that the longer they stayed on the Portland, the better their health got.

On 2nd February 184 male convicts were embarked and on the 9th February eight more men were received on board. The Portland departed Cork on 21st February 1833 with 193 male convicts.


Illness During The Voyage

There was an unusual degree of sickness which the surgeon attributed to the convicts of Ireland being much inferior in health and vigour than the convicts in England. As well their clothes were worse, being more or less worn and thin. By the time they reached the cooler weather in the southern latitudes the surgeon reported that their clothes were in tatters.....By this time, notwithstanding the pains actually taken by most of the poor fellows their clothing very generally gave way and with difficulty was held together, however by procuring patches of old canvas and sewing them to the most needy, they continued to keep themselves covered and to get into Sydney in good condition as to health.

In need of water and with 15 prisoners seriously ill, the Portland had touched at Lisbon however in consequence of one man on board having already died of cholera, on entering the Tagus, the ship was immediately ordered off. [1] During the voyage two more deaths occurred from cholera. The last case of this appeared in March. Six people also died from fever and other diseases. According to Charles Inches' journal nine people died altogether.

The Portland arrived in Sydney Cove on 26 June 1833. In consequence of rumoured illness on board, despatch of the mails that had arrived was delayed until an examination of the vessel had taken place.

The convicts were mustered on board on 1st July 1833. The indents reveal the name, age, religion, education, marital status, family, native place, offence, sentence, date and place of trial and physical description. There is no indication in the indents as to whom the men were assigned on arrival.

Dr. Bowman on behalf of the Board of Health boarded the Portland and submitted his report to the Executive Committee who sat at a late hour to receive it. He pronounced the vessel healthy and the men were landed on Saturday 13th July 1833.

The detachments of the 21st Fusiliers that arrived by the Asia and the Portland, proceeded on the Funchal to join the strength of the Regiment stationed at Hobart.

In the Sydney Herald on 22 July 1833, distribution of the convicts reported:

9 assigned to the Commissariat Department

4 assigned to the Surveyor General's Department


Departure of the Portland

Two of the seaman William Ambrose and John Raine, refused to sail on her stating, that they had signed articles under Captain Ascough, and that they were not forced to serve under a new captain. They could not, nor would serve under Captain Coghill who was taking over as captain of the Portland. They were sentenced to 7 days hard labour in the Gaol.

The Portland was wrecked seventeen miles to the East of the George Town Heads in October 1833. All but two survived the wreck. The infant daughter of Mr. Cox was washed from it's mother's arms and although rescued from the sea by a sailor could not be saved. The carpenter of the ship also drowned. The Master of the vessel was said to be lying dangerously ill at George Town. [3]

3). Captain William Ascough made his fortune as a ship's captain and owner bringing convicts to the Colony in the ships.......

4). Hunter Valley convicts and passengers arriving on the Portland in 1833.


5). Convict ships bringing detachments of the 21st regiment (Royal Scotch Fusiliers) and Officer in command of the Guard.... 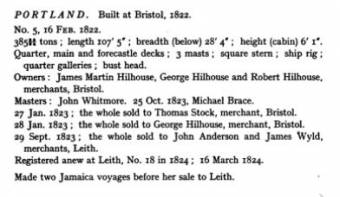