The Mellish was the next convict ship to leave England for New South Wales after the departure of the Vittoria in September 1828.

At the end of October and the first week of November 1828, thirty soldiers of the 63rd regiment under Captain Pery Baylee, three women, four children were embarked on the Mellish which was moored on the River Thames.

Pery Baylee was born in Limerick Ireland, son of Sexton Baylee and Anne Tavernor. He died in Limerick in 1845. More about Captain Pery Baylee at the Australian Dictionary of Biography

The Morning Chronicle reported on an escapee from the Mellish in December 1828.....

A convict named James Hawkins succeeded in escaping from the Mellish on the 8th December. In 1821 Hawkins had been transported for life, and arrived at Sydney in December of that year; he escaped in 1824 and arrived in England in the following year. In 1826, he was apprehended, tried and again sent to New South Wales and again escaped. In October 1827, he was again apprehended in London, tried, and convicted and a third time sentenced to transportation, but contrived to escape from the caravan which was conveying him from Newgate to the Hulks. He was re-taken in August last, and again sentenced to transportation, and sent on board the Retribution hulk. On the 21st of November, he was embarked in the Mellish upon the voyage to Sydney. The Mellish sailed and about dusk on the evening of the 8th, as the vessel was sailing through the Needles, he slipped his irons, and lowering himself from a port hole, cut away the hawser of a small boat, and rowed ashore to the Isle of Wight. The boat and himself were soon missed and an immediate search was made through the Isle of Wight but he was not found. He ascribed his repeated and daring escapes to a doting fondness for his wife. (1)......

Later in the month it was reported that Hawkins had drowned - The master of the vessel forfeits a thousand pounds for not having taken proper precautions to prevent the flight of the prisoner. (2) James Hawkins was previously transported on the Prince of Orange and the Marquis of Huntley.

Surgeon Superintendent Joseph Cook kept a Medical Journal between 7 October 1828 and 28 April 1829. In consequence of westerly winds during November and December the ship was detained at different Ports in the English Channel and having frequent gales, with rain and generally damp weather, the health of the convicts was at first considerably affected by it. The prevailing complaints were dysentery, diarrhea and fever.

Joseph Cook outlined his methods for keeping the prisoners healthy - In the treatment of the convicts to preserve health, they were daily examined by mustering and were made to wash clothes, twice a week. The 'tween decks were kept as dry as possible by dry holystoning and scraping the deck and airing with the stoves in wet weather. When within the tropics their woollen clothing was taken from them and returned as the ship advanced to the southward and an additional pair of flannel drawers issued.br>

One hundred and seventy prisoners were originally embarked on the Mellish. One boy Ralph Richardson age 13 was returned to the hospital onshore suffering from dysentery and James Hawkins had escaped before departure.

When the Mellish proceed on the voyage from Falmouth on 2nd January 1829, 168 prisoners were on board.

On the 10th the Mellish anchored at Teneriffe. As the ship came into warmer weather the health of the convicts improved. They crossed the Equator on 31st January 1829.

The following men were treated by the surgeon before and during the voyage:

The Mellish arrived in Port Jackson on 18 April. 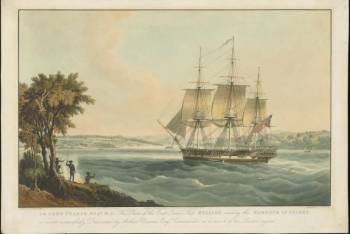 The indents include name, age, religion, education, marital status, family, native place, trade, offence, when and where tried, sentence, prior conviction, physical description and where they were assigned on arrival. There are also occasional notes, so that it is revealed that William Bowen was blind in the left eye and Andrew Brown was lame in the fingers and Richard Sale had served 7 years in a hulk for a prior crime. William Vandy was considered 'idiotical'.

The youngest prisoners such as Thomas Connelly, Henry Williams, Thomas Wayling and Thomas Sadler age 16 were sent to the Carter's Barracks.

The Mellish departed Sydney bound for Singapore in May 1829.


Convicts of the Mellish identified in the Hunter Valley

4). The Mellish arrived in VDL with convicts on 22nd September 1830

5. National Archives - Reference: ADM 101/53/1 Description: Medical and surgical; - Reference: ADM 101/53/1 Description: Medical and surgical journal of the Mellish convict ship for 7 October 1828 to 28 April 1829 by Joseph Cook, surgeon and superintendent, during which time the said ship was employed in a voyage to New South Wales.