Thomas W.M. Winder was born in London. Before coming to Australia he was a captain in the Merchant Navy.

He arrived in Sydney on the Frederick in 1817. He was a merchant, however abandoned trading after sustaining financial losses in a deal with Captain Ritchie, who failed to bring a promised cargo from Calcutta.

He was granted a large allotment on the corner of Bligh and Hunter Streets Sydney where he built a store house, advertising his goods as early as May 1818.

In partnership with Samuel Terry, Winder established a water mill for grinding flour at Botany Bay.

In the early 1820's Thomas Winder received several grants of land at the Hunter river. He was granted 760 acres on Hunter River on 31 October 1821. In April 1823 he accompanied Lieut. William Hicks to the Hunter. After this Hicks was granted 1120 acres which he named 'Melville' and Winder was granted a further 2000 acres. Thomas Winder acquired by purchase, 320 acres from Luke Dillon - it was on these acres that the sandstock brick Windermere House was later built with the use of convict labour[2]. A grant of 2000 acres was transferred to Winder by
Henry Hawes and by 1828 he owned 7,400 acres of land as well as allotments in Maitland.

In partnership with George Williams, Thomas Winder owned the famous cutter Lord Liverpool. Captain Alexander Livingstone of Bowthorne was master of the Lord Liverpool for many years. T.W.M. Winder also owned the Currency Lass and the St. Michael storeship.

Thomas Winder married Ellen Johnson in 1819. They had nine children together. Their daughters, mentioned in the article below were Jessie, Ellen, Ann, Mary, Agnes and Fanny. 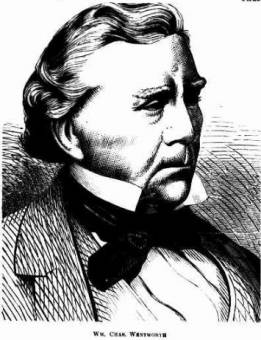 William Charles Wentworth was the son of Catherine Crowley and D'Arcy Wentworth. Catherine Crowley was convicted at the Staffordshire Assizes in July 1788 of feloniously stealing 'wearing apparell' and was sentenced to transportation for seven years. She was sent to Australia on the convict ship Neptune in June 1790. Dr D'Arcy Wentworth, who also sailed in the Neptune acknowledged William as his son. [1]

William C. Wentworth owned Vaucluse estate on the south side of Sydney harbour, and his father's estate Homebush as well as many sheep stations however he lived at Windermere estate for several months each year. It was he who later extended Windermere homestead into a thirty room house. There were cellars, stables, coach house and a vineyard.[1]

A few of the many convicts who were assigned to work at the estate when it was owned by Thomas Winder were:

Winder and Wentworth in partnership with Charles Nott established a boiling down facility for the manufacture of tallow at Windermere in the depression of the 1840's. They were advertising their establishment in the Maitland Mercury by August 1844.

By 1847 William Wentworth had established extensive vineyards at Windermere. He entered samples of Burgundy wine, sweet water wine, brandy and vinegar in the Hunter River Agricultural Society show in April 1847.


In 1848 the estates of Windermere were advertised for lease in small lots, with or without the magnificent Windermere House. Later, in 1851 the estate was purchased by Charles Nott.


In 1868 the proprietor was Peter Green. He put the estate up for auction in that year. It was described as a magnificent estate situated within an hour's drive by road or fifteen minutes by train from West Maitland and comprising between 950 and 1000 acres, a considerable portion of which was of the richest alluvial character. There was a steam boiling establishment with a twenty horse power engine with pulverizer, bone crusher etc.

Windermere House was considered a commodious family mansion with over thirty rooms and cellars, and the very best ideal of a gentleman's country residence; it was tastefully designed and elegantly finished in the best style of workmanship. The interior was in excellent order and condition, though the outside had unfortunately been neglected, the proprietor having bestowed more attention to home appliances than outward decoration, looking to substantial and lasting improvements to the general estate rather than out door embellishments. It was estimated that the original expense of the erection of the house must have exceeded £4000.

In addition, the outbuildings were most complete consisting of an eight stall stable (two stories) built of brick, coach house, hay loft etc. with men's rooms all in excellent condition; and a spacious and cellar for wines 90 x 27 x 24 was in the course of being constructed. There were also between 13 to 15 acres of five year old vines in the vineyard and an orangery that covered 12 acres of land and contained from 1000 to 1200 luxuriant trees.

Windermere was purchased by Charles Solomon Capp in 1870. The homestead burned down in a fire in 1882 and a new house was later constructed on the foundations of the old convict built mansion.