He arrived in Hobart with his wife Ann and their daughter on the Medway in 1822 with the intention of entering the mercantile industry. 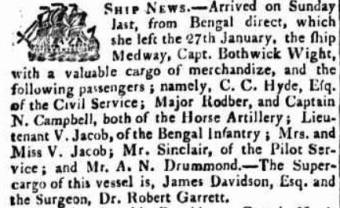 Arrival of Vicars Jacob in Hobart


An article in the Sydney Gazette in 1823 gives the reason for his decision to settle in Australia:

'Vickers Frederick Jacob, son of Vickers Jacob of George Street died on 9th instant. He was the third child of the Jacobs to die within four years. All had died from fever due to teething. The loss of the two former children was ascribed to the influence of the Indian climate. Mr. Jacob had retired from the service of the East Indian Company and settled in New South Wales under the hope of being here spared a similar trial but this last infliction has shewn the deceitfulness of such hopes and the inefficiency of human precautions.'


By 1822 he had transferred to Sydney where he commenced business as a merchant in George Street.

He was granted land on the Hunter River named Knock Finn and Millers Forest. The location of his grants can be seen top left on the map below.

Vicars Jacob was resident in the Hunter region by 1824. His name also appears alongside 192 other men who were first granted allotments of land in Newcastle. His allotment adjoined that of James Reid.

He was involved in a dispute with the military at Newcastle in this year when Magistrate Captain Henry Gillman entered Jacob's property without permission and was sued by Jacob for misuse of a search warrant. [1]

Vicars Jacob also had difficulties with his convict servants. In correspondence to the Sydney Gazette in 1824 he vented his frustration....

Extract....In the month of December last, in consideration of a grant of land received from Government, I took upon myself the maintenance of twenty convicts, whom I sent to the farm ; it so happened, that the greater proportion of them had just arrived from Ireland, for, in their own words, 'doing nothing,' an art of which they appear perfect masters. About the 1st of April I visited them, cherishing all the moderate characteristic expectations of a Settler, of seeing ' 80 acres of the finest maize in the Colony,' my land being the very best any where to be found ; but fancy, Mr. Editor, my disappointment at not finding one stalk. I had, however, the satisfaction to perceive that the Irishmen had not injured my timber, they having left the blue gum's and iron barks in statu quo antes.

Their huts appeared desolate, until I hailed ' Dennis' On his appearing, I enquired his present occupation ? ' Frying a rasher and a couple of eggs to keep the hunger out of my stomach.' 'And where's Larry ?' ' He's holding the frying-pan while I'm wid your Honor.' ' And where's Paddy ? ' - ' He's gone to Mr. M'Leod's smith to mend the gridiron which he broke on the dog's back, for looking at him doing a bit of a stake off one of the kangaroos the boys hunted this morning.' And where's Tim, and Jem ? - .'They are gone with the dogs after another kangaroo.' ' And where's Roger?' - ' He's gone to the stock-yard for milk to cool the tay.' 'And where's Morgan?' 'He's gone wid him to carry it ;'and similar throughout was the result of my enquiries

Vicars Jacob departed Sydney on the Princess Charlotte in February 1825.[2]

His assigned servant Patrick Riley absconded in July 1825 after being sentenced to 50 lashes for losing sheep. Riley was soon joined by other convicts from Jacob's Estate as well as two more from the nearby estates of Dr. Moran and John McDonnell. They formed a bushranging gang that became known as 'Mr. Jacob's Irish Brigade. This gang terrorised settlers in the lower Hunter for months.

Vicars Jacob died of fever died in Calcutta in 1836 shortly before embarking for Hobart. His wife continued the journey with their four children and died soon after arriving in Hobart.

3). Find out more about Vicars Jacob