The story of Towrang and its Stockade was largely part of the story of the Great South Road.

This road, surveyed by Major Mitchell in 1830 was constructed by convicts under the supervision of military detachments from the various regiments stationed in the colony.

The use of convict labour necessitated the building of stockades along the route at points where there was no accommodation. One existed at Wingello but the one at Towrang was the principal one in the southern districts.

There was some indication that this particular station had hopes of being ultimately a settlement or village, but the Stockade lasted only for 13 years from about 1833 to 1846. 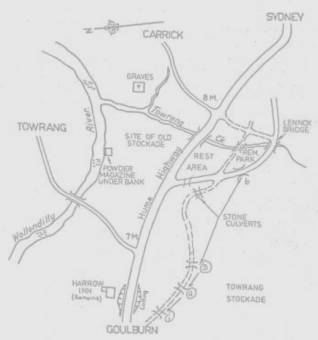 
Probably the demolition of the Stockade began in 1843 for Surveyor Larmer, in a document in the Lands Office, showed the area divided into small allotments with a view to sale.

Lot 1 had thereon a small stone cottage, 8 old huts and four boxes, evidently horse boxes, and a shed. It was suggested that this collection should be converted into an inn. The buildings were valued at £60 and the grounds at £4 an acre.

In its heyday, the Stockade must have been the proverbial hive of industry, for there were seldom fewer than 250 prisoners at Towrang; the accommodation must have been inadequate even for those days, when one took into account the number of soldier guards required, many with families.

Life at Towrang Stockade was on a par with that at Port Macquarie, Port Arthur and other establishments of the same nature. The working bullock received far better treatment than that meted out to the human labour force. One thing they had in common-both worked in chains.


Ten in a Cell

The men slept ten men to a cell with bare boards with a blanket apiece, whilst those serving 14 years, worked in irons. All wore black and yellow uniforms. Punishment for any misdemeanour, however trivial, was swift and terrible - 25 to 50 lashes for having a smoke or speaking to a passing traveller, and for the crime of absconding, 100 lashes after being caught.

One, suspected of malingering, was handed 25 by Captain Rossi and Mr. Stewart, the P.M. This man was genuinely ill and died. These sentences were left in the capable hands of one Billy O';Rourke, known as the 'Towrang Flogger.' On one occasion he was relieved by 'Black Francis,' euphemistically referred to as 'The Goulburn Castigator.'Undoubtedly a lot of accounts were marked paid when Black Francis was murdered near 'Run o'Waters' by some ticket-of-leave men he'd reported.

It was from the Towrang Stockade that Lieut. Gorman with the convicts formed the road over the Big Hill or Governors Hill in the early forties . [3]

Gradually the red coat, musket and shako gave way to the peaked cap, blue tunic, white moleskins and carbine of the rapidly growing Mounted Police. The name 'trooper'' alone connected the two. Many of the soldiers at the Stockade joined the Police Force.

By 1843 the Stockade was becoming a memory. In 1951, a stock-taking of what was left revealed the relic of a powder magazine, a little cemetery, two convict built culverts and a bridge. - Adapted from The Story of Towrang Stockade, Goulburn Post 12 November 1951

Of the three, the bridge is outstanding from an historical and aesthetic point of view. Beautiful work in a beautiful setting, the keystone bears the date 1839. It is believed to have been designed by David Lennox but the hands that built it were the hands of the convicts of the Towrang Stockade.

The bridge has a segmental arch and it is built of dressed coursed sandstone. In 1840 a correspondent to the Sydney Monitor commented that he had seen 10 men from the Towrang Stockade working under a soldier from Paddy's River. They were preparing stone for the Towrang Bridge. 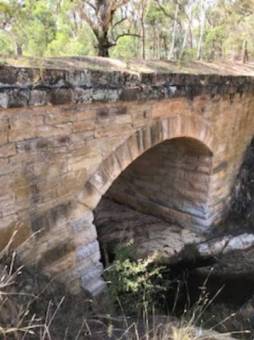 There were both soldiers and convicts buried in the cemetery across Towrang Creek from the Stockade however only three gravestones remain.

The inscription on one headstone reads: 'Sacred to the Memory of John Moxey, Private Soldier 80th who departed this life 16 November 1838, aged 38 years, 22 years service. Remember me as you pass by as you are now so once was I, as I am now so you must be, prepare for death follow me. This stone was erected by his comrades as a token of respect towards a good and deserving soldier’.

A sign at the Cemetery site erected by the trustees of the Towrang Stockade states that the following three persons may be aburied there:

James Fielder per Guildford 1824 buried 17 February 1839 and ? Monks by the Lancashire buried 15 February 1839 who were killed by blast exploding

Henry Sears and John Dagley absconded from the Stockade in 1840 and were apprehended at a farm having fire arms in their possession.

Thomas Yates alias Badgery's Scrubber pleaded guilty of stealing fire arms in a dwelling house. He arrived in 1834. While working in the ironed gang attached to Towrang Stockade, he knocked down the sentry on duty, seized his musket and effected his escape. One of a gang of three armed bushrangers. Captured and sentenced to transportation to a penal settlement for life. Sydney Herald 29 March 1842

William Miller a runaway from Towrang Stockade charged with having fire arms in his possession transported to a penal settlement for life. The Australian 28 October 1842