Rinaldo Scheberras was born in Milan in 1808, the eldest of twelve children of Count Camillo Scheberras and Maddalena Ravenelli.

The Scheberras family returned to Malta where Rinaldo enlisted in the 80th regiment as an ensign by purchase on 16 March 1826. [1]

The 80th regiment served at Corfu and Cephalonia before returning to England where they were stationed in Manchester, Chatham and Belfast. Ensign Scheberras was promoted to Lieutenant on 16 April 1833.[2]

In 1837 the 80th regiment was ordered to embark for Australia where they were to be employed guarding convict gangs and other military duties. Lieutenant Scheberras came in command of the military detachment on the convict ship Calcutta arriving in Sydney on 5th August 1837.

Detachments of the 80th served in various localities in New South Wales and Van Diemen's Land. Lieutenant Scheberras served at Wingello Stockade in 1837 and also by some accounts at the Towrang Stockade.[3]

In 1839 Lieut. Scheberras was appointed Assistant Engineer and Superintendent of the Harper's Hill Stockade at Maitland [4]. He was Police Magistrate and in command of the Stockade until 1842.

It was in Maitland that he probably met and married Jane Platt in 1842. Jane was the eldest daughter of former settler Lieut. John Laurio Platt.

By the time of Jane and Rinaldo's marriage in 1842 the Platt family had already been decimated by misfortune and tragedy. Two of the sons Robert aged 13 and and John Laurio aged 4 were killed in a devastating bushfire in 1831. Weighed down by grief Roseanne and eldest daughter Jane were affected with 'delerium' for months. [5]

Unable to recover from the tragedy John Laurio and his wife Roseanne both died in 1836, leaving their orphaned offspring to be taken in by the family of Edward Close of Morpeth. Select here to read correspondence written by John Platt in January 1835 outlining his misfortunes....Transcribed by Gionni Di Gravio 27th June 2006 Cultural Collections (Archives), Auchmuty Library University of Newcastle.

In November 1842 Rinaldo Scheberras resigned from his position as Superintendent of the Stockade at Maitland. A dinner was held in his honour by twenty of his friends on 17th November 1842 at Cox's Hotel, previous to his leaving the district. [6]

In March 1843 he was promoted to Captain and adjutant of the regiment [7]. The following year the 80th was called for service in India.

When Captain Scheberras sailed for India with his regiment on the Royal Saxon, his wife Jane accompanied him. Also on the Royal Saxon was Jane's sister Mary Anne Platt who may also have had a beau in the 80th regiment.

Rinaldo Scheberras was first stationed at Fort William at Calcutta and later at Agra and Ambala.

He died a hero in the battle at Sutlej on 21 December 1845 at age 37 and was later awarded the Sutlej Campaign Medal.[8]

Jane Scheberras was only 31 years of age when she was widowed. She never re-married. Jane and her sister Miss Mary Ann Elizabeth Rosetta Platt returned to Australia on the Phantom arriving in Sydney in November 1846 [9]

Jane and Mary Anne seem to have stayed together for the rest of their lives. They are listed in shipping as cabin passengers on the Sobraon bound for London in February 1870. [10] 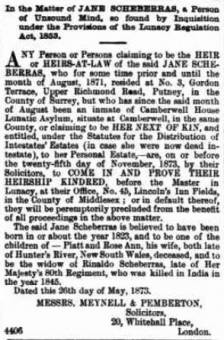 1). The tragic circumstances of Jane Scheberras and Mary Ann Platt are recorded at Sarah Wise's Inconvenient People site in her article about Mrs. Georgina Weldon of Tavistock House.

[4] Returns of the Colony