Use the Search Box above to find your Hunter Valley Ancestor.
The Newcastle Hotel may have been Newcastle's first licenced premises. Gentleman John Smith advertised the opening in the Sydney Gazette on 28th August 1823.........

JOHN SMITH respectfully begs Leave to announce to Gentlemen, Settlers, and Others, that he has, on the Recommendation' of Major Morisset, Commandant of the Settlement, obtained a licence for vending Wines and Spirituous Liquors, and that his House, The Newcastle Hotel, is now Open for their Reception and Accommodation.

J. Smith begs Leave also to state, that, having a substantial Store on his Premises, Gentlemen, visiting this Settlement, may be accommodated with secure storeroom for such Goods as they may bring with them; and, if required, may be supplied with Boats, properly manned, to proceed up Hunter's River.

J. Smith also informs Settlers on the Banks of Hunter's River, that, having recently opened a Connection with the Waterloo Company at Sydney, it will be in his power to supply, at this Settlement, any Quantity of Flour from that Establishment, on the most reasonable Terms.

Location of the Inn

The location of John Smith's Inn approximately on corner of Watt and King Streets, can be seen on John Armstrong's Map of Newcastle 1830.... 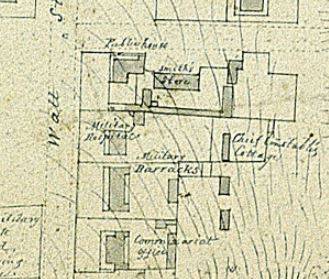 In January 1828 a correspondent to the Monitor visited Newcastle and gave the following account of John Smith. At that time according to the journalist John Smith's establishment was known as the Crown Inn.......

I was lying in bed this morning listening to the noise of the surf, and thinking that Christmas was as far distant as ever again, when my friend - who sleeps in an adjoining chamber, knocked at my door to tell me, that The Liverpool had just come in. You would hardly imagine what a stir is created amongst us, when the flag, which denotes the approach of this particular vessel is hoisted. I equipped myself hastily en dishabille and sallied forth to hear the news.

The passengers were just landing; a trio of J.Ps and some four or five of the Sydney Dons were making the best of their way to Gentleman Smith's (for so the Crown Inn is familiarly designated, from the peculiar neatness of attire, which distinguishes this Newcastle Boniface, under the most unfavourable circumstances, even in former times when famine and misery had attained their climax).

But the newspapers were the centre of attraction. One was running up the hill to 'Frank Batties' for the Monitor, and another down the town to Fred Boucher for the Australian. (The Gazette does not find its way down, in any thing like the numbers that the other Journals do). - The Monitor 3 January 1828.

1). More about John Smith and Convicts assigned to him at Newcastle and Maitland