Francis Beattie, Charles Booth, John Barker and John Dewhurst were tried in Lancaster on 23 March 1809 and sentenced to 14 years transportation for forging notes. They were sent to the Perseus hulk from Lancaster Castle on 23 May 1809 and transferred to the Indian convict ship which departed England on 18 July 1810.

In Sydney in 1817 Francis Beattie was found guilty of receiving a quantity of meal that had been stolen from Mr. Dixon's steam engine. He was sent to Newcastle penal settlement for a term of seven years. [1]

In 1823 he petitioned Governor Brisbane for a lease of land. His petition is interesting for the fact that he called the location of his house Walliss' Hill.....

The Humble Petition of Francis Beattie,
Most respectfully shewith,
That your Excellency's Petitioner arrived at this settlement upwards of five years back under sentence of 7 years transportation.
That shortly after Petitioner's arrival Captain Wallis (46th Regiment) then Commandant was pleased to give him an allotment of ground on which he erected a substantial dwelling house. No. 4 Walliss' Hill, and has expended a considerable sum thereon.
That Petitioner being an aged man and having a wife to maintain, is desirous to spend the remainder of his days at this settlement. And therefore humbly hopes your Excellency will be pleased to confirm his present title to the aforesaid land by granting him a Town Lease thereof [2].

Francis Beattie was assigned to Alexander McLeod at Newcastle in October 1824 according to papers in the Colonial Secretary's correspondence. His trade was given as 'turner'. He became free in December 1824 and was recommended for a land grant by Commandant Henry Gillman so that he could build a commodious Inn with stables and out buildings which according to Major Gillman were much needed at the settlement. [3] Captain Francis Allman was Commandant when Francis Beattie's approval came through in 1825. He was to be allowed two allotments of land upon entering a bond to build his Inn complete with stables and out houses.[4]

Francis Beattie was granted a publican's licence to sell spirits, beer and ale in March 1825. He established the Crooked Billet Inn in 1825. During his years at Newcastle as well as his business running the Inn he also worked as a bailiff, gaol keeper, pound keeper, auctioneer and store keeper.

In 1829 Francis Beattie came into financial difficulties and the following action was advertised:

At Newcastle on the premises of the defendant and at such other places as at the time of sale may be found convenient, the sheriff will cause to be sold the following property belonging to this defendant: A dwelling house with stabling and bakehouse standing on two town allotments situated in Bolton Street at the Bottom of church hill and a licenced house known by the sign of the Crooked Billett now paying the weekly rent of twenty shillings [5]

Francis Beattie, the original proprietor of the Crooked Billet died in October 1835 age 57 and was buried in Christ Church Burial Grounds.[7]

John Smith was named as executor. Some of his belongings were advertised to be sold from John Smith's Stores in Newcastle: 10 cows, heifers, steers, 1 mare 1 pony, gig, cart, saddle, household furniture, clothes, sofas and a bedstead [8]. The premises of the Inn may have come into the possession of Edward Biddulph at this time.

Frederick Dixon held the licence at the Crooked Billet in 1828 - 29. The Inn was used by seamen.

.....From the Sydney Monitor...(The following has been sent to us, but we consider it a mere joke. Ed.) Newcastle Police- A person in a state of intoxication having gone into the house of Mr. Dixon at Newcastle, called the Crooked Billet, and laid himself down in the tap, was robbed of two pounds and a gold ring; a month and two days after this affair, Mr. Dixon was summoned before the bench on account of a man being robbed in his house; Mr. Dixon appeared before Captain Wright, Superintendent of Police in that district, and Dr. Cunningham. During, the course of the investigation, he was asked, what sort of characters were in his house on that evening? Mr. D. replied, different characters, Oh replied the Bench, “indifferent characters !” We fine you then one pound for keeping a disorderly house”. [9]

According to an article written in 1947 by W.J. Goold, president of the Newcastle Historical Society, the Crooked Billet, under the Page family, became known as the Miners' Arms. The frontage almost faced Hunter Street and the street was known as Market Square. The Maitland coach departed the Miners' Arms for the Northumberland Hotel in Maitland.

The building was used as a Customs House under the control of Major Charles Bolton. Major Bolton had under him a clerk by the name of Henry Parkes, who later became Premier of New South Wales.[10]

The building reverted to its original role, that of an Inn in the 1860's, under the sign of the Shipwrights' Arms, the licence being held by John Peterson who later transferred his licence to a new building in Hunter Street.

The Shipwrights' Arms re-opened as the London Tavern but was de-licenced and conducted as a boarding house known as Northumberland House. The building was still standing in 1947 however plans were underway to built a three story hostel for Catholic Women. [10]

1). In February 1836 Allotment 69 also known as the Crooked Billett was conveyed from Edward Biddulph to Samuel Ashmore, John Hosking and Archibald Campbell (the executors of the estate of the late Richard Charles Pritchett.) This document of conveyance states the site of the Crooked Billett to be allotment 69. (seen on the map below between the land of Parry Long and Leslie Duguid[11]. This is a different location that that of the Miner's Arms which was allotment 100 ∴ the two Inns may have been at different locations. 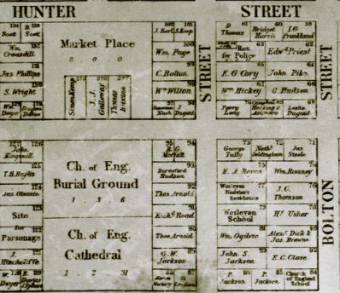