Use the Search Box above to find your Hunter Valley Ancestor.
On Wednesday 9th December 1880 flags of the ships in harbour and on the various mercantile houses throughout Newcastle were flown at half-mast in memory of an old and esteemed resident, Captain John James Coombes, who died at his residence, Onebygamba, about 4 p.m. on the previous day.

John James Coombes first came to Australia in 1832 as Master of the convict ship Southworth with a consignment of female prisoners on board. His wife Catherine accompanied him on the voyage. The Southworth departed Cork on 6 February 1832 and arrived in Port Jackson on 14 June 1832.

The position of Master on a convict ship was one only obtainable by ship masters specially qualified, and selected after great consideration by Government; more especially with regard to female convict passengers -the regulations requiring a commander, amongst other things, to be married, strictly temperate, and of unblemished character. [1]

The first child of Catherine and John James Coombes, Eleanor Moatis Coombes was born in Sydney on 29 July 1832. [2]

John James Coombes had married Catherine Lewis in London in 1830. Their children included:

John George Nathanial Gibbes was a Crown-appointed member of the New South Wales Legislative Council and the Collector of Customs for the Colony of New South Wales.

In 1842 Captain Coombes was in Sydney on the Hope when the Lady Raffles caught fire and was later scuttled. Despite many attempts to raise her all were unsuccessful until Captain Coombes took on the task, who, by great exertion succeeded, and Lady Raffles was towed the same night up to Sharp's Bay, where she was left aground at high water. The method was very simple - having fastened a lighter on each side of her, and with a little purchase from on board the Pyramus, they managed to get her afloat with very little damage allowing all her cargo to be got out. [6]


4). 1847 Medway - The frigate built ship Medway under Captain Coombes departed Sydney for London on 25th January 1847.[7] She returned to Sydney on 16 January 1848 bringing on board some very esteemed passengers including:

In June 1850 as Master of the Constant, Captain Coombes gave testament as to the quality of the meat from the Newcastle Meat Preserving Company [9]. In 1852 the Constant sailed from San Francisco on 28 May 1852, touching at Honolulu and arrived in Port Jackson 6 August 1852


6). 1869 - Planet - Captain Coombes brought the Clipper ship Planet, 667 tons, from London to Sydney via Brisbane in January 1869. Passenger Mrs. Coombes and their son.

John James Coombes was appointed assistant wharfinger at Newcastle in 1875 [10]. He resided at Onebygamba, later known as Bullock Island or Carrington and perhaps worked at the new wharf facilities that were constructed in the next few years after his appointment.

This was a time of expansion to coal loading facilities at Newcastle and extensive works were commenced by the Public Works Department for the purpose of increasing the wharfage accommodation and shipping facilities of the port.

A new engine house for the reception of machinery to work hydraulic cranes was built at Carrington and new wharves 8000 feet in length were planned to cover an area of 102 acres. The wharfs were connected with the Great Northern Railway by a branch line crossing Throsby's Creek by which coal could be delivered alongside the vessels. The hydraulic cranes were erected at intervals of about 300ft along the front of the wharf. Steam cranes that had been used previously caused a great deal of smoke and dust by the steam boilers and there was a continual jar and rattle of machinery. All this would be eliminated by the new hydraulic cranes.

The engine house which would contain the large pumping engines, was a substantial structure built of compressed bricks and Sydney Sandstone, and was built on a massive foundation of concrete. [11]

By the end of 1877, the first section of this hydraulic powerhouse (as the engine house came to be called) was nearing completion. [12] 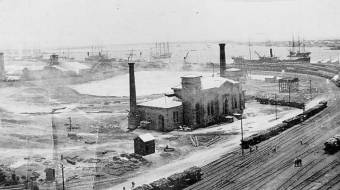 John James Coombes held the position of wharfinger until his death in 1880 at the age of seventy-nine, and was said to be hale, hearty and jovial up to the last.[13]