George Forbes arrived in New South Wales with his brother Sir Francis Forbes on the Guildford in 1824. 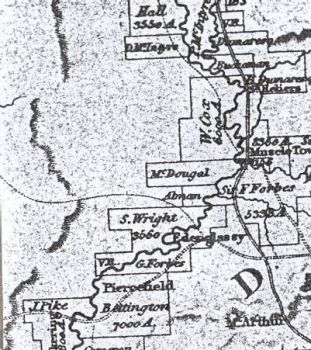 Peter Cunningham described the area in 1826 -

You enter first upon Edinglassie, the property of Mr. George Forbes, brother to our able and amiable chief justice, who possesses many thousand acres here, which he is stocking with fine woolled sheep. To the right is Captain Dickson's farm, and to the left in succession, the farms of Messrs. Carter, Mills, and Ogilvie. On the opposite bank there are only two resident proprietors, namely Captain Pike and Mr. Greig, the remainder of the land being all occupied as stock runs by distant proprietors. Mr. Ogilvie and his family are resident upon their property at Merton, the scenery whereof exceeds even that of Edinglassie, being still more various in its features; in fact, I may add, that it is the only place which , having before heard much praised, I was not disappointed in.

James White arrived on the Fairfield in 1826, having been employed by the Australian Agricultural Company to bring a flock of sheep to Australia. On arrival he took the sheep  to 'Retreat Farm at Parramatta before moving them to Port Stephens.

In 1830 James White left the Australian Agricultural Company and moved to Ravensworth, the property of James Bowman where he was employed as superintendent.

Edinglassie was purchased by James White in 1839. 2) More about Edinglassie at NSW Heritage 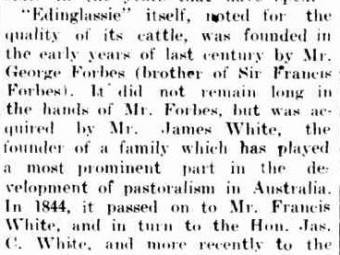