Use the Search Box above to find your Hunter Valley Ancestor.
George Galway Mills was born in 1765.

Governor Brisbane was informed in January 1824 that George Mills had been appointed Registrar of the Supreme Court of New South Wales....

His Majesty having been pleased to appoint Mr. Mills to be Registrar of the Supreme Court in New S. Wales, I am to desire that you will put him in possession of his Office and afford him every support and assistance in your power. The following are some of the duties which will devolve upon him:

First. - In his Office all Writs will be sued out and prepared for the Signature of the Judge. He will receive and record all Declarations, Pleas, and other written Pleadings, both at Law and Equity. He will be charged with the Custody of these Records. He will prepare and issue Official copies of them.

Secondly. He will always be present in Court at all Civil Proceedings. He will take a Process Verbal of all that passes. He will draw up from the Notes thus taken all Judgments, Decrees, Orders and Sentences, that is to say the adjudication of the Court in its different Jurisdictions, as a Court of Law and of equity, as a criminal and as an Ecclesiastical Tribunal. He will of course be assisted by Clerks, who with leave of the Court may sit for him occasionally, but he will not be allowed to act by Deputy.

You will not understand these directions as an accurate specification of the duties to be executed by the individual, but merely as a general summary for your guidance.

With reference to the above duties, I think it necessary to inform you that Mr. Mills should receive a Nett Salary of £800 per annum, which should arise from the fees payable to him as Registrar, and the Chief Justice should be directed to draw out a Docket of Fees, which will on an average afford him the above sum. If however they should exceed £800 per annum, Mr. Mills will be directed to pay the Surplus into the Police Fund ; and in the event of their not amounting to that sum, the deficiency should be made good from the Colonial Revenue. I have, etc, Bathurst.' HRA, Series 1 Vol. XI p. 192

George Mills sailed from London on the Lang on 21st March 1824; The Lang touched at Rio and arrived in Hobart in July 1824 before sailing to Sydney.

He was granted 2000 acres which he took up in the County of Durham, Parish Barnard Castle. This grant was later increased to 2,560 acres however George G. Mills probably did not ever reside at the Hunter River.

George Galway Mills' wife remained in England however he was expecting his son Douglas Cowper Mills of the 90th regiment to arrive in the colony and applied for a grant of land on his behalf. 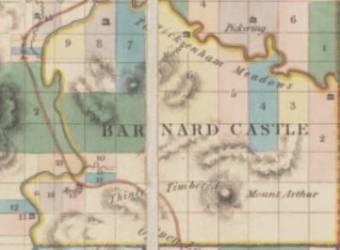 George Mills died from a self inflicted injury in February 1828. His funeral which proceeded up Pitt street was attended by his Honor the Chief Justice, and Mr. Blaxland of Newington as chief mourners, the late Sheriff Mr. Mackaness, the Colonial Secretary, Colonels Lindesay and Shadforth and most of the Civil and military officers.

The sale of his estates was reported in December 1832......On Thursday the valuable estates of Colonel Mills at Hunter's River were brought to the hammer by Mr. Bodenham at Polack's London Tavern. The first estate, containing 2000 acres of Whinstone land, was knocked down to Mr. W. Webb for £540. The second of 560 acres was bought by Mr. James Robertson for £205 . [2]