Use the Search Box above to find your Hunter Valley Ancestor.
In 1947 the Daily Telegraph produced a souvenir supplement to commemorate the 150th anniversary of the founding of Newcastle. The following article titled 'Australia's Strongest Sports Centre' mentions many of Newcastle's sporting heroes of the day .........


Newcastle in proportion to its size is the strongest sporting centre in Australia. Eighty per cent of its male population of eligible age take part in some sort of sport. And Newcastle's greatest successes have been in the tougher sports - football, boxing, racing. As it was with their forefathers more than 100 years ago, sport is always the topical conversation over a pot of beer, on the pit tops, and in the factories champion becomes a public idol.

Rugby League players and supporters are just as proud that young Cyril Burke is getting a trip to England with the Australian Rugby Union team as they were when League men like Wal Prigg and Herb Narvo went abroad.

Newcastle began to organise its sport in the latter part of the 19th century. Rugby Union was the first to take shape, and competitions were arranged.

A sporting visitor is always well received and cared for at Newcastle. Sixty years ago the captain of the English Rugby Union touring team, W. Sneddon, was drowned while swimming at Maitland. Newcastle and Maitland people still look after Sneddon's grave in the local cemetery as if he had been a local born idol. It all developed from a time more than 100 years ago - long before organised sport was thought of, and Newcastle sport was a weird and wonderful thing.


The miners made their own sport on pay Saturday. Publicans provided it on back Saturdays. Miners played a strange game of Rugby, in which rules were few. They also loved their racing on the small tracks in the outskirt villages. The publicans arranged pie eating, cock fighting and porridge waddling contests, quoits, and club swinging. The publicans' sports continued until early this century. The porridge waddling contests were famous and Newcastle had its champions. The porridge was cooked in a huge copper behind the hotel. Contestants would gorge themselves. On lookers would bet big money about which candidate would eat most. Those porridge waddlers could eat too. A character known as 'Bibby' is supposed to have eaten 84 plates of porridge to win the title at Lambton in 1889. Newcastle was as proud of 'Bibby' then as it is of champion boxer Dave Sands today.

Newcastle produced quoits champions too. The old miners will tell you that 'Chook' Henderson was the greatest quoits player Australia has produced. Henderson threw 25 successive ringers with two and a half pound iron quoits on clay ends 18 yards apart in 12min. 5 sec. at Empire Hall, Kurri Kurri in 1905. Quoits is still played on the distant coalfields, but only in a small way.

Before quoits reached its heyday the men bet on all sorts of freak sports. A character known as 'The Flying Pieman' became famous for his performances in freak sport just 100 years ago.

These are some of 'The Flying Pieman's ' performances:

The same year he walked backwards half a mile in 6 min., ran one mile in 7 1/2 min., and wheeled a barrow one mile in 15 minutes without a rest.

The Flying Pieman is still talked about in Newcastle and a local racehorse was named after him.

C. Hearne was another notable in the freak sports. He defeated T. Wall in a 100 yards race backwards in 15 sec. for a &pound20 side wager at Maitland in 1935. In 1884 Joe Byrnes cleared 120 ft. in 10 standing jumps. Bill Hickey, one of the colony's best rowers, on three successive Saturdays in 1865 beat J. McLear for &pound100, R. Green for &pound200 and H. White for &pound200. He used a different type of boat each Saturday Hickey won 15 successive races that year, including the championship of Australia. He again won the championship of Australia in 1873.

Newcastle had its track champions in those days too. In 1875 Bob Walson broke the Australian 440 yards record when he ran the distance in 50 1/4 seconds.

The first fight on record in the Hunter Valley took place at Hanging Rock, a gold digging near Nundle on November 1852. H. Young beat Quinn in 11 rounds for a side wager of &pound100. They fought bare knuckle and each knock down ended a round.

The Paddy Sinclair v. 'Yellow Jimmy' fight at Maitland in 1857 was the first fight stopped by police in Australia. Sinclair beat 'Yellow Jimmy' in seven rounds and won a side wager of &pound100.

Newcastle boasts it has produced more than 20 Australian boxing champions.

Soccer football, which has developed into Newcastle's strongest sport, had its birth there in 1884. Four Scotsmen, named Jack Winning, Bill McCrorie, John McCrorie, and Bob Frame, received a newspaper from home. They read about the growth of Soccer in Scotland, and decided they should have soccer in Newcastle too. They sent home for a book of rules and a ball. The book of rules and a five panel ball arrived 12 months later.

The four Scotsmen posted a notice on the pit top at Lambton inviting anyone interested in the ';new game of football'; to attend practice in a nearby paddock. They got a good roll up, and after a few weeks practice, the players had learned enough to arrange a match against a Sydney team called the Caledonians. The match was played at Lambton on August 17 1885. The Newcastle team won 3-2. The Newcastle Herald reported the match two days later in its district news column. The paragraph was headed ' A Strange Game of football' .

Newcastle played a prominent part in the founding of Rugby League in Australia in 1908. It formed a team and played in the Sydney competition that year. Under thorough organisation Newcastle sport began to flourish. Many champions were produced, and Newcastle soon was well represented in international contest.

In recent years it has been the feeding ground for Sydney in both Soccer and Rugby League football.

About 15 years ago Wallsend could put a Soccer team on the field worthy of representing Australia. At least 80 per cent of Australia's greatest Soccer players came from Newcastle. In Rugby League Newcastle players have built up almost every Sydney club. Newcastle has produced nine Rugby League internationals in the past 20 years - Wal Prigg, Jim Gibbs, Len Dawson, Herb Narvo, Dave Parkinson, Ron Bailey, Noel White. Seven of the New South Wales team of 17 which toured Queensland this year learned to play in Newcastle. Many champions would never have got a chance if they had not gone to Newcastle settled there, and learned the ideas on which local champions are built.

Test cricketer Arthur Chipperfield is the outstanding example of this. Chipperfield was an 'unwanted' in Sydney, could not even get a job. He settled in Newcastle, immediately became happy with real friends all around prepared to help him. Within two years Chipperfield was chosen in the Australian team to tour England in 1933 - 34. His selection was a shock in Sydney, but it wasn't in Newcastle. Newcastle people had seen how his form had improved under the happy life they had helped give him. For since the days of the porridge waddlers and 'The Flying Pieman' friendliness has been one of the characteristics of Newcastle sport. 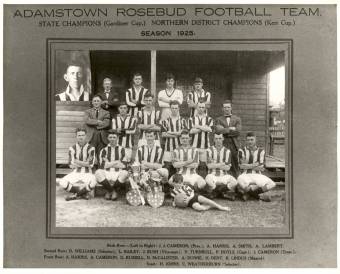 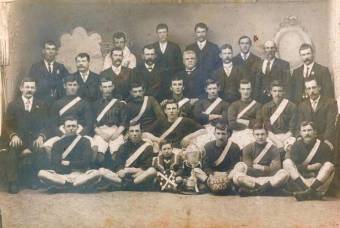