From a description in Convict Ships, by Charles Bateson ........ The Surry was built at Harwick in 1811 and owned by the well known London firm of Mangles. She was a fully square-rigged ship of 443 72/94 tons, with an overall length of 117 ft 6in and a breadth above the wales of 29ft 6in.

She was copper sheathed and had quarter galleries, with a Minerva bust for a figurehead. As originally built, the Surry had two decks with a height between decks of 5ft 8 in but was rebuilt about 1818 and from the following year is shown in the register as having three decks.(1)

The Headquarters of the 46th regiment commanded by Lieut-Col George James Molle arrived on the Windham and other detachments arrived on the Recovery, Elizabeth, Larkins, General Hewitt, Three Bees, Guildford, Surry, Shipley, Ocean, Marquis of Wellington, Canada and Bencoolen. Brevet Major Stewart of the 46th regiment arrived passenger on the Surry.

Matthew Bacon came free on the Surry. He was later employed as a clerk in the Commissariat Department.

The Surry departed England on 22 February 1814 and sailed via Rio de Janeiro.

There was a severe outbreak of fever on this first voyage and of the 200 prisoners who were embarked in England in January 1814 only 164 survived to disembark in Sydney.

Surgeon William Redfern later investigated the circumstances of the voyage.........

It appears from the Ships and Surgeons journals that they were admitted on deck in divisions of twenty five men each in rotation; that the Prison was regularly cleaned and fumigated; that Vinegar, Mustard and Soap were issued; that divine Service was read to the Convicts in the Prison; and that half a pint of Wine was served out to each man every Sunday during their Stay in England. On the 22d February they sailed, having formed the Convicts into Nine divisions of twenty and twenty One men each, One Admission of which was admitted on the deck in turn during the day; in addition to this Number, there were fourteen, who being appointed to perform little Offices for the others, had Constant access to the deck.

Those who succumbed to fever included the Captain, Surgeon and two Mates as well as two soldiers of a detachment of 25 men of the 46th regt., Thirty six or thirty eight male prisoners out of two hundred also died from the fever.

On the 7th of March, the Surgeons journal records the case of John Stopgood, who seems to have been the first who laboured under typhus fever. On the 12th, John Ranson died of fever, from which time it seems to have been Kept up more or less till their Arrival in Port Jackson. The Surgeon, altho' his journal is very uninteresting, containing no remarks of importance, or indicating much thought, seems to have paid All the Attention in his power to cleansing and fumigating the Prison up to the 2d of June, when his journal ceases. And on this point I am sorry to observe, from all I have been able to learn on the Subject, that neither his representations nor his efforts met with that Attention or Assistance from the Captain and his Officers, which it was their duty to have afforded him. For, Notwithstanding that Another fatal termination of fever occurred on the 22d May, no attempt appears to have been made towards Ventilating the prison.

The ship's journal contains a regular registry of the times of cleaning and fumigating the Prison, of Admitting the Convicts on deck, of Divine Service being read to them in the Prison, and of issuing the Wine. On the 18th of March, it states that the Convicts were formed into eight divisions, One of which had Access to the deck in turns during the day; and that Tuesday and Friday were appointed for washing days, which seems from the Journal entries to have been pretty regularly observed till She made Rio Janeiro on the 11th of April. While they lay in Rio, they were supplied with fresh Beef, Vegetables and fruit. And it States that on the 16th as no shore boat was permitted to go along side. Captain Paterson sent on board tobacco and Sugar for Such of the Prisoners, as had the means and wish to purchase any. On the 21st April, they left Rio Janeiro; and the Journal goes on to state the times of Admission of the Convicts on the deck; cleaning and fumigating the prison, and issuing the Wine, the last issue of which took place on the 1st of May. From Sunday the 24th of May, no more mention is made of Divine Service having been read to the Prisoners. On the 22d of May Isaac Giles died of fever, the last case mentioned above from the Surgeon's journal. Nothing worthy of Notice Occurs in the Ship's journal, being merely a registry of transactions, similar to those in the last paragraph, to the 9th of June, when Aaron Jackson died of fever, from which period the deaths became Awfully frequent. On the 26th July they fortunately fell in with the Transport
Broxbornebury. Being reduced to the greatest distress requested Captain Pilcher to send some person on board to take charge of the ship. Next day Mr. (Samuel) Nash from the Broxbornebury went on board, and took charge of the Surry; the Captain, two Mates, the Surgeon, twelve of the Ships Company, Sixteen convicts and six soldiers were lying dangerously ill with fever. Captain Paterson died the same day.

The Sydney Gazette reported that the Broxbornebury fell in with the Surry off Shoal Haven and on speaking her, learnt that from the relaxed state of the crew, and illness of the surviving officers, her safe conduct into Port Jackson was despaired of, unless assisted from the other ship with some person capable of navigating her in; for which service a seaman capable of the task generously volunteered his service and brought her in. Thomas Raine, a junior officer was the only surviving officer left on the vessel.

The Surry arrived at Port Jackson on 28 July 1814. The National Library of Australia holds a sepia etching of the Surry arriving in Sydney Harbour.

As soon as the melancholy report was communicated to the Governor in Chief by the Naval Office, who had in the mean time prohibited any communication with the vessel from any shore or ships' boats, His Excellency was pleased to confirm the interdiction until the nature of the prevailing malady should be ascertained by the Principal surgeon and the other Gentlemen of the Medical Department; whose report, after being repeatedly alongside, confirmed the apprehension already entertained of the contagious nature of the distemper. His Excellency issued instructions that the Surry should be brought up at a convenient anchorage near the North Shore where the people might be landed, and remain until the danger of their nearer approach should disappear.

A Notice was soon issued prohibiting any but the medical and quarantine officers from communication with anyone from the ship. She was placed in strict quarantine and there was a guard both on the vessel and on the North Shore to prevent any contact. Despite this and the prospect of severe punishment, two of the convicts - Thomas Thomas and John Poole - took the opportunity to abscond. A notice for their apprehension was soon issued.

The names of the prisoners who died, the Hulk they had come from and the date of their death were included in the Sydney Gazette on 10 September 1814.

After this high death toll and that of the earlier General Hewitt, Governor Macquarie ordered an inquiry into the conditions on convict ships. Surgeon William Redfern produced a detailed report (part of which is above) and strongly recommended the appointment of Naval surgeons to each voyage.

The Surry was advertising to depart Port Jackson in September 1814.

Thomas Raine became Master of the Surry and brought her safely to Australia in 1816, 1819 and 1823. When he returned on the Surry in 1819 the Sydney Gazette wrote of him: Captain Raine - the Gentleman who navigated the Surry after she had lost her first Commander, and every other senior Officer on board, through a dreadful contagion which had raged with unabated fury, and which upon her arrival at Sydney called forth the most active and efficient means of separating from the town, the survivors of the fatal influenza. Highly to the praise of our Medical Department every gentleman visited the unfortunates at the North Shore. Many were restored to health and strength. It was a case as peculiar and excessive in distress and suffering; Captain Raine was then a junior officer and had survived all his seniors.

1). Hunter Valley convicts/passengers arriving on the Surry in 1814

3). William Collins Burke Jackson arrived as a convict on the Surry. Read excerpts from The Profligate Son: Or, a True Story of Family Conflict, Fashionable Vice, and Financial Ruin in Regency England' by Nicola Phillips.

4) The following correspondence by Nicholas Bayly to Sir H. Bunbury is an extract from the HRA, Series 1, Vol. IX, p. 200 James Gilchrist mentioned, arrived on the Surry. He did survive his dreadful sentence in Parramatta prison and was later transported to Newcastle.... ....Last Week in Company with the Revd. Samuel Marsden who is the Principal Magistrate at Parramatta, I visited the Jail, and horrid to relate I saw a Prisoner who had nearly lost the use of his Limbs and Faculties by confinement on Bread and Water in the Jail. In a Cell I saw a Prisoner perfectly mad, chained to the Wall, and in two other Cells, I saw four other Men two in each Cell; their Names and Sentences are in the enclosed List which also contains against Michael Hoare, James Gilchrist,. Edward Doyle and John White (the four Men) a Copy of the most dreadful Sentence I hope ever heard of. I understand it has been ascertained that Human Nature cannot exist without endangering the faculties the half of twelve Months upon Bread and Water, but here is the additional Sentence of two years imprisonment in the Gaol should they by any miracle survive- the first twelve Months confinement in a Solitary Cell upon Bread and Water; and after that transportation to New Castle for Life

7). In February 1822 the Surry, Captain Raine departed Sydney with former Governor Lachlan Macquarie on board bound for England. 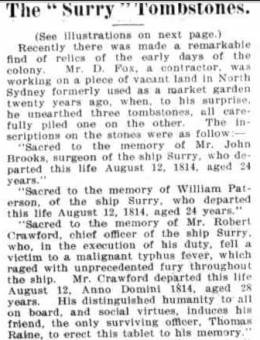 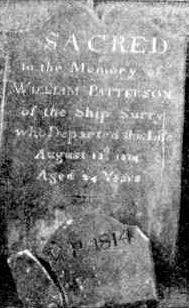