The Surprize was the same vessel that made the voyage with the Second Fleet in 1790 when she carried two hundred and fifty-six male convicts. On this voyage in 1794 only 23 men and 60 women were embarked in England in 1794. [3]

The Historical Records of New South Wales reveal that Messrs. Camden, Calvert and King were paid £334 14s 3d for the expense of fitting out the Surprize for convict service. Patrick Campbell, master of the Surprize was paid £393 13s 0d. for furnishing provisions and necessaries for the use of settlers and other persons embarked on board the Surprize. [2]

The Military Guard consisted of Serjeant Samuel Reddish, an ensign and twenty one privates of the New South Wales Corp; six of them being deserters from other regiments who had been taken from the Savoy prison and one of them was a mutineer from Quebec. [3]

The Surprize embarked four Scottish political prisoners who became known as the Scottish Martyrs. Thomas Muir, Thomas Palmer, William Skirving and Maurice Margarot. Another of their associates Joseph Gerald, was transported on the Sovereign in 1795. 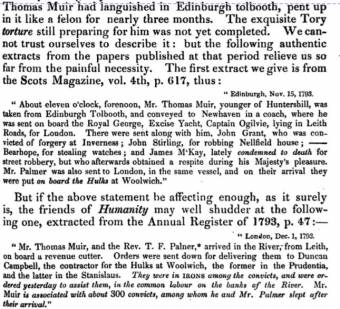 ........The Trial of Joseph Gerrald, Before the High Court of Justiciary


The Belfast Newsletter reported on 10th December 1793.....Mr. Muir has been so ill, since he was put on board the hulks, that he has not appeared on deck; Mr. Palmer is in better health; he is permitted to sling a hammock in the common felons apartment, instead of sleeping on the platform; and this is the only favour that he has experienced since his arrival (at the hulk).

The Northampton Mercury reported on 15th February 1794......Yesterday Messrs. Muir, Margarot, and Skirving, under sentence of transportation, were conveyed from Newgate to the place of their embarkation to New South Wales. Mr. Palmer was sent off some days since. Between ten and eleven o'clock about 60 female convicts were put on board a vessel at Blackfriars Bridge, destined for New South Wales. The women were all under 40 years of age. 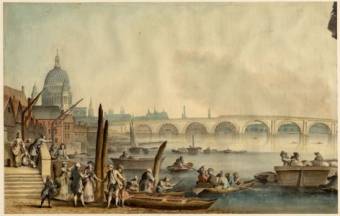 View of the stone bridge, still incomplete, showing the dome of St Paul's rising above the houses on the left. By Samuel Hieronymus Grimm. British Library 1768.

Three years previously George Barrington had made that same humiliating journey when he was embarked on the Active. He recorded his emotions in a later narrative .......About a quarter before five a general muster took place ; and, having bid farewell to my fellow prisoners, we were escorted from the prison to Blackfriars-bridge by the city guard, where two lighters were waiting to receive us. This procession, though early, and but few spectators, made a deep impression on my mind ; and the ignominy of being thus mingled with felons of all descriptions, many scarce a degree above the brute creation, intoxicated with liquor, and shocking the ears of those they passed with blasphemy, oaths and songs, the most offensive to modesty, inflicted a punishment more severe than the sentence of my country, and fully avenged that society had so much wronged.[1]

As well as the convicts there were free settlers on the Surprise - John Grant and his family; Matthew Pearce and his pregnant wife; a young man named James Ellis who accompanied Thomas Palmer but who was to be considered a free settler on arrival not a domestic to Palmer.


John Boston petitioned to be sent as a free settler in correspondence to Under Secretary King on 5th December 1793......

In detailing his qualifications Boston wrote:

'I was brought up as a surgeon and apothecary, but have never since followed that profession. I have since made my particular study those parts of chemistry that are more particularly useful in trade and business. Have, therefore, a knowledge of brewing, distilling, sugar-making, vinegar-making, soap-making, etc. I have been in business as distiller, but was unsuccessful. I likewise have a theoretical and some practical knowledge of agriculture. '

The Surprize departed England on 2nd May 1794. She was the next convict ship to leave England for New South Wales after the departure of the William in March 1794.

On the 30th June we parted with his Majesty's ship the Suffolk and most of the East India ships and arrived at this port on the 2nd ultimo with his Majesty's sloop of war the Swift; but owing to the pipes that convey the water to the town being broke just as the sloop and Reddam got watered, for we were not allowed to take any until they were done, this obliged us to send several miles for water, and having a long way to roll the casks occasioned so great a delay. Several of the convicts having symptoms of a flux just after our arrival here, we thought it prudent not to go to sea with them in that state, but owing to the very great care and attention of Mr. Baker, the superintendent and the great care and skill of Mr. Thompson, the surgeon, there is not now a sick person in the ship. [5].

There were reports of mutiny brewing and several people later gave evidence. The Captain stated that John Grant a convict, came to him on 31st May with information that he had overhead that the deserters (the soldiers from the Savoy prison) in the Irish language which he understood from its analogy to the Gaelic, concerning measures to seize the ship on leaving the fleet, or as soon as it was found proper for their purpose by attacking the cabin and murdering the captain. He also heard them say the rest of the soldiers would join them; whereupon the captain put in irons the six soldiers. He also put in irons Mr. Macpherson the chief officer who he suspected of knowing of the mutiny. [6]

The Surprize arrived in Sydney Cove on 25 October 1794.

1). The Dramatic escape of Scottish Martyr Thomas Muir on the American ship Otter 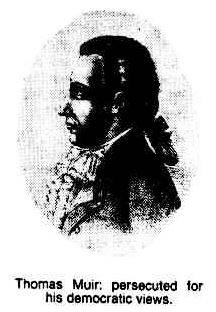 2). Select here to read about the trial of Maurice Margarot

3). The obituary of Maurice Margarot was printed in the Freemans Journal in 1815 and reads in part....He was one of the five persons condemned to a fourteen years' transportation (in 1794) and the only one of the five who returned to his native country. He died on 11th of last month at the advanced age of 70. He was of a highly respectable, and we are informed, noble family, originally from Rome; and may be said to have a love of liberty for a part of his patrimony; his father who was an eminent merchant, having been in the habit of entertaining at his house the most popular leaders of the day....After receiving a classical education, and finishing his studies at Geneva, where he was not likely to lose the spirit he had imbibed in his boyhood he entered into his father's business and pursued it for several years in various quarters of the world......Maurice Margarot according to a correspondent who knew him, was of the middle stature; he had been handsome in his younger days, was well proportioned, full of pleasantry and anecdote with elegant manners - a scholar and a gentleman. Age and care had made their usual havoc with his appearance in some respects; but the lively and intelligent spirit still shone through it...Freeman's Journal 23 December 1815

6). In correspondence by Governor Hunter to the Duke of Portland dated 30th April 1796 the fate of William Skirving is revealed...Mr. William Skirving, a very decent, quiet and industrious man, who had purchased a farm already cleared, and was indefatigable in his attentions to its improvement, just as the labour of the harvest was near over was seized with a violent dysentery of which he died on the 19th of the same month. (HR NSW Vol 3, p. 47.) William Skirving died in March 1796 and was buried in the Old Sydney Burial Ground

7). Convict Mary Blaney arrived on the Surprize. She died in 1811 and was buried in the Old Sydney Burial ground, as was John Crowe who died in 1793 and Thomas Dick who was murdered in June 1805.

8). William Baker first came as a Marine on the First Fleet, arriving on the Charlotte. He returned to England and was appointed Superintendent of the convicts on the Surprize soon afterwards. Find out more about William Baker at Wikipedia.

Image of William Baker's farm on the Hawkesbury River from An Account of the English Colony in New South Wales by David Collins. (Courtesy of the British Library who released over a million images on to Flickr Commons in December 2013)


9). Gabriel Louis Marie HUON DE KERRILLEAU, came free on the Surprise, 1794 as a private soldier in the New South Wales Corps in October 1794; he was discharged in 1807 and, until 1809, was tutor to the sons of John MacArthur; he received a grant at Narellan in 1810, a ticket of occupation for land at Bungonia in 1823 and purchased land at Corrundaroo in 1825. (Colonial Secretary's Index) He married Louisa Le Sage born 1772 in Brittany, France and tried at the Old Bailey 17th September 1794. for stealing a watch, watch key, clock, petticoat, shawls, from her employer. Louisa and Gabriel had 4 children and became wealthy land owners. Their children assumed the surname Huon. Louisa died in 1842. (Descendant contribution)

10). Prisoners and passengers of the Surprize identified in the Hunter Valley region